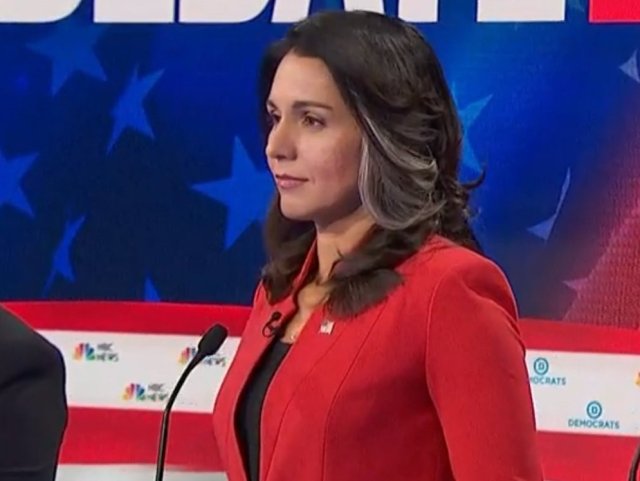 The Tulsi Gabbard presidential campaign has filed a major law suit against Google.  This article outlines the main points of the law suit and evidence the the social media giant Google has quietly acquired enormous influence on public perceptions and has been actively censoring alternative viewpoints.

Tulsi Now, Inc vs Google, LLC was filed on July 25 in the U.S. District Court for the Central District of California. The attorneys demand a jury trial and seek compensation and punitive damages of “no less than $50 million”. Major points and allegations in the 36 page complaint include:

* Google has monopolistic control of online searches and related advertising.

“Google creates, operates, and controls its platform and services, including but not limited to Google Search, Google Ads, and Gmail as a public forum or its functional equivalent by intentionally and openly dedicating its platform for public use and public benefit, inviting the public to utilize Google as a forum for free speech. Google serves as a state actor by performing an exclusively and traditionally public function by regulating free speech within a public forum and helping to run elections.” (p. 22)

“Google has used its control over online political speech to silence Tulsi Gabbard, a candidate millions of Americans want to hear from. With this lawsuit, Tulsi seeks to stop Google from further intermeddling in the 2020 United States Presidential Election….. Google plays favorites, with no warning, no transparency – and no accountability (until now).” (p. 2)

* At a critical moment Google undercut the Tulsi Gabbard campaign.

“On June 28, 2019 – at the height of Gabbard’s popularity among internet researchers in the immediate hours after the debate ended, and in the thick of the critical post-debate period… Google suspended Tulsi’s Google Ads account without warning.” (p. 3)

* Google has failed to provide a credible explanation.

The Tulsi campaign quickly sought to restore the account but “In response, the Campaign got opacity and an inconsistent series of answers from Google… To this day, Google has not provided a straight answer – let alone a credible one – as to why Tulsi’s political speech was silence right when millions of people wanted to hear from her.” (p. 4)

Google started by falsely claiming “problems with billing”.  Later, as reported in the NY Times story  a Google spokesperson claimed, “Google has automated systems that flag unusual activity on advertiser accounts – including large spending changes – to prevent fraud….In this case, ‘our system triggered a suspension.’ ”

* Google has a corporate profit motive to oppose Tulsi Gabbard.

“Google has sought to silence Tulsi Gabbard, a presidential candidate who has vocally called for greater regulation and oversight of (you guessed it) Google.” (p. 5)

“During her career in Congress, Gabbard has moved to limit the powers of big tech companies like Google and has fought to keep the internet open and available to all. Gabbard has co-sponsored legislation that prohibits multi-tiered pricing agreements for the privileged few, and she has spoken in favor of reinstating and expanding net neutrality to apply to Internet firms like Google.” (p. 8)

* Google’s Actions have caused significant harm to the Gabbard campaign and violate the U.S. and California constitutions and California business law.

“Through its illegal actions targeting Tulsi Gabbard, Google has caused the Campaign significant harm, both monetary (including potentially millions of dollars in forgone donations) and nonmonetary (the ability to provide Tulsi’s important message with Americans looking to hear it).” (p. 6)

“Google engages in a pattern and practice of intentional discrimination in the provision of its services, including discriminating and censoring the Campaign’s speech based not on the content of the censored speech but on the Campaign’s political identity and viewpoint.” (p. 27)

* The public has an interest in this case.

“Unless the court issues an appropriate injunction, Google’s illegal and unconstitutional behavior will continue, harming both the Campaign and the general public, which has an overwhelming interest in a fair, unmanipulated 2020 United States Election cycle. (p. 34)

Google Explanation is Not Credible

The Tulsi Gabbard Google Ads account was abruptly suspended at a crucial time. The question is why. Was it the result of “unusual activity” triggering an “automatic suspension” as claimed by Google? Or was it because someone at Google changed the software or otherwise intervened to undermine the Tulsi campaign?

Google’s explanation of an “automatic suspension” from “unusual activity” is dubious. First, the timing does not make sense. The sudden rise in searches on “Tulsi Gabbard” began the day before the suspension. Gabbard participated in the first debate, on June 26. Her presence and performance sparked interest among many viewers. Next morning, June 27, media reported that, “Tulsi Gabbard was the most searched candidate on Google after the Democratic debate in Miami“. The second debate took place in the evening of June 27. With discussion of the Democratic candidates continuing, Tulsi Gabbard continued to attract much interest. Around 9:30 pm (ET) on June 27 the Google Ads account was suddenly suspended. If the cause was “unusual activity”, the “automatic trigger” should have occurred long before.

Second, Google was fully aware of the “unusual activity”. In fact, Google was the source of the news reports on the morning of June 27.  Reports said:

According to Google Trends, Massachusetts Sen. Elizabeth Warren was the most searched candidate heading into the debate… After the debate, Gabbard vaulted into first.

Third, it is hard to believe that Google does not have any human or more sophisticated review before suspending a major Ads account on a politically intense night.  It should have been obvious that the cause of increased interest in Gabbard was the nationally televised Democratic candidates debate and media coverage.

Fourth, the changing explanation for the sudden suspension, starting with a false claim that there were “problems with billing”, raises questions about the integrity of Google’s response.

Unknown to most of the public, there is compelling evidence that Google has been secretly manipulating search results to steer public perception and election voting for years.

Dr. Robert Epstein, former editor-in-chief of Psychology Today, has been studying and reporting on this for the past six years. Recently, on June 16, 2019 he testified before the Senate Judiciary Committee on the Constitution. His testimony is titled “Why Google Poses a Serious Threat to Democracy, and How to End That Threat”.

Epstein has published 15 books and over 300 scientific and mainstream media articles on artificial intelligence and related topics. “Since 2012, some of my research and writings have focused on Google LLC, specifically on the company’s power to suppress content – the censorship problem, if you will – as well as on the massive surveillance the company conducts, and also on the company’s unprecedented ability to manipulate the thoughts and behavior of more than 2.5 billion people worldwide.”

As shown by Dr. Epstein, Google uses several techniques to manipulate public opinion. The results of an online search are biased. Search “suggestions” are skewed. Messages such as “Go Vote” are sent to some people but not to others.

Epstein’s written testimony to Congress includes links to over sixty articles documenting his research published in sites ranging from Proceedings of the National Academy of Sciences to Huffington Post. Epstein’s testimony describes “disturbing findings” including:

“On Election Day in 2018, the ‘Go Vote’ reminder Google displayed on its home page gave one political party between 800,000 and 4.6 million more votes than it gave the other party.”

“My recent research demonstrates that Google’s ‘autocomplete’ search suggestions can turn a 50/50 split among undecided voters into a 90/10 split without people’s awareness.”

“Google has likely been determining the outcomes of upwards of 25 percent of the national elections worldwide since at least 2015. This is because many races are very close and because Google’s persuasive technologies are very powerful.”

In August 2017 TruePublica reported their experience and predictions in an article titled “The Truth War is Being Lost to a Global Censorship Apparatus Called Google“. The article says:

60 percent of people now get their news from search engines, not traditional human editors in the media. It is here where the new information war takes place – the algorithm. Google now takes 81.2 percent of all search engine market share globally…. Google has the ability to drive demand and set the narrative, create bias and swing opinion.

In 2017, the World Socialist Web Site (wsws.org) reported that:

In April, under the guise of combating ‘fake news’, Google introduced new procedures that give extraordinary powers to unnamed ‘evaluators’ to demote web pages and websites. These procedures have been used to exclude the WSWS and other anti-war and oppositional sites. Over the past three months, traffic originating from Google to the WSWS  has fallen by approximately 70%…. In key searches relevant to a wide range of topics the WSWS regularly covers – including the U.S. military operations and the threat of war, social conditions, inequality and even socialism – the number of search impressions …has fallen dramatically.

In essence, Google has “de-ranked” and is screening searchers from seeing alternative and progressive websites such as truepublica, globalresearch, consortiumnews, commondreams, Wikileaks, truth-out and many more. WSWS reported numerous specific examples such as this one: “Searches for the term ‘Korean war’ produced 20,932 impressions in May. In July, searches using the same words produced zero WSWS impressions.”

“The policy guiding these actions is made absolutely clear in the April 25, 2017 blog post by Google’s Vice President for Engineering, Ben Gomes, and the updated ‘Search Quality Rater Guidelines’ published at the same time. The post refers to the need to flag and demote ‘unexpected offensive results, hoaxes and conspiracy theories’ – broad and amorphous language used to exclude any oppositional content…. “The ‘lowest’ rating is also to be given to a website that ‘presents unsubstantiated conspiracy theories or hoaxes as if the information were factual.’”

Tulsi Gabbard has not only called for much stricter regulations on high tech and social media giants. She has also challenged the Democratic Party and foreign policy establishment.  In late February 2016 she resigned as vice-chair of the Democratic National Committee to support candidate Bernie Sanders against the establishment favorite, Hillary Clinton. Gabbard has issued sharp criticisms of US foreign policy.  Recently she said:

We hear a lot of politicians say the same argument that we’ve got to stay engaged in the world otherwise we’ll be isolationists as though the only way the United States can engage with other countries is by blowing them up or strangling them with economic sanctions by smashing them and trying to overthrow their governments. This is exactly what’s wrong with this whole premise and the whole view in which too many politicians, too many leaders in this country are viewing the United States role in the world.

This is a David vs Goliath story. Google/Alphabet is the 37th largest corporation in the world with enormous political influence in Washington. Whether or not the law suit succeeds, it may serve the public interest by exposing Google’s immense monopolistic power and illustrate the need for much more regulation, transparency and accountability.  It may also generate more interest in Gabbard’s message and campaign in the face of efforts to silence her.

Rick Sterling is an investigative journalist who grew up in Canada but currently lives in the San Francisco Bay Area of California. He can be reached at rsterling1@gmail.com. Read other articles by Rick.