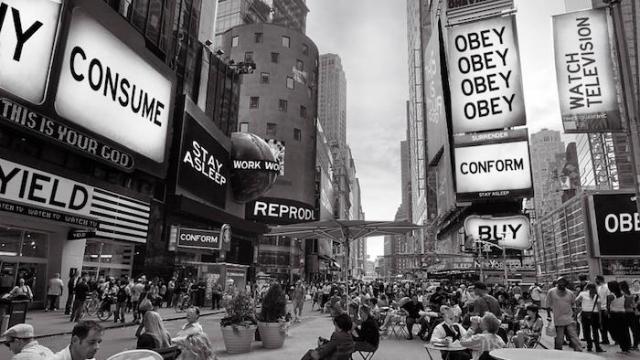 Recall that you’re sitting in a rapid transit vehicle, carried along the sky-line above cement highways, paved in homage to the Romans, who designed a system of militarized paths stretching everywhere, causing everything to lead back to one place. Here we are everyone, the year of the Monkey, 2016, 98 years after The Great War … too bad it isn’t the year of the Dalmatians … Mickey Mouse recently Tweeted that Disney is working on buying the rights to the Chinese lunar calendar. Imagine 12 animated classics framing each and every year for the remainder of humanity’s existence.

At this point human society is so vast, so complex, so multilayered, that it is impossible to stay updated, engaged, and participating in every area of local and global importance. Education takes us from a place of innocence, creativity and joy, forcing us to fall into the institutional lines of desks and faced forward attention. As a nodal point of knowledge each new person will be filled to the brim with information that makes them useful to the status quo.

Neuroscience now tells us that the brain has plasticity and the neurosynaptic networks that are created through nurturing, which become identity and personality, can be changed and overwritten. Newer pathways can be formed and strengthened and older ones can be reduced. Does this mean that our free-will has a physical manifestation as identity, as culture, and every choice affects the people, animals and objects around us? Everything we think and do reinforces everything we think and do, creating a strange logical loop which justifies our lives as ourselves. Without any major impetus, what reason do we have to change? Why compromise our internally consistent narrative and accept the narrative of someone else? What stands to be different?

Surreality is becoming a more constant state as life in the present starts to look like Science Fiction of the future from the past. The last historian wandering around Paris in the 21st Century, forgotten by a technologically advanced world that cares only for materialism. A beguiled Case, the lead character of Gibson’s Neuromancer, disenfranchised because he can no longer participate in the romance of cyberspace, looking something like a hacker barred by the law to approach or touch a computer. Of course cyborgs, robots, virtual reality and AI dance at the periphery, the momentum of current technological trends, yet we titillate ourselves with the practical possibility of these totems nearing our hearts and minds.

Information overflows like never before. Some cry Apocalypse! End Times! The Rapture! But most of the world is still filling up their gas tanks, believing that the day when Climate Change will actually affect them is the day that it will be clearly outlined in a power point presentation, at their offices or wherever they work, explaining the equity found in maintaining current profit margins while in the same breath rearranging the economic vehicle of prosperity.

“Change without Changing!” might be the Party Slogan for whoever runs for the Presidency after Obama sputters to a close.

Take my hand and run through the ever-increasing fields of soya beans, where we can hear the Monsanto genetically-modified breeze blowing the answer in the wind, whispering corporate sonatas, proving that commercial capitalism is a system of religion. Faith in Profit! The Gospel of Endless Progress! Join our Church of Business! Maybe Monsanto can use its private militia to assassinate Thomas Piketty, because of the seeds he’s sowing about capitalism being a mechanical beast that needs regulation because its fuel is the disparity between rich and poor … the larger the gap the more efficacious the fuel.

Then I think whether or not you’ll be reading this on paper or a flat-screen … whether either will be made from recyclable resources, and the argument that the printed word is less sustainable than the digital, so let’s put them to the test, right here, right now:

What can you do with a single piece of printed paper? Read it, eat it, burn it, re-write on it, make origami, a paper airplane or a boat, use it as a funnel, snort powders with it, wipe our bums? What can we do with a tablet? Access every possible available medium via the Internet and software?

It takes at least a lumber, ink, metal, and print industry to create the basic elements to manufacture printed media on a large scale. The average printed matter, kept in modest condition, can last up to 100 years and still be usable. The space that a single printed work takes up is quite large, creating the need to provide space of the material itself. When recycling an old book there are few components to worry about, making it rather simple.

It takes at least most types of mining and the processing of raw materials (petroleum, silicon, zinc, aluminum), software and hardware development, manufacturing, and the assembly of components to create a tablet. The average tablet, kept in modest condition, can remain functional until it’s obsolete. It certainly will not last 100 years, and even if it did the components, chips and circuitry would be so worn down that anything you might have used it for would no longer be possible. Of course you can store a million, a billion, even a zillion books on a single tablet, but will everyone have equal access to it? Tablets are extremely difficult to recycle, their components don’t just make up another tablet. The loss from entropy alone assures destruction, and we cannot grow more zinc, petroleum, or aluminum.

But really none of this matters, we don’t have any control over what corporations choose to do with our futures, or what medium we will use. These new, futuristic developments, intended to define human culture, are being devised and formed inside of grand boardrooms, in tall skyscrapers, by CEOs and shareholders. They, the 1%, are only concerned with whether the product they create for us will become a necessary commodity, like food, like water, like shelter … like Subway, like Coke Cola, like Single Room Occupancies (SROs).

You hear someone talking about the protest on Burnaby Mountain. People don’t want Kinder-Morgan expanding the capacity of an already existent pipeline because it will significantly increase the traffic of oil tankers in the Burrard Inlet. Someone else discusses the unrest of activist groups in Vancouver; about the substandard living conditions; the war on the poor; the two new prisons … they care about housing those who arise from poverty and have been given nowhere else to go. Anger overtakes you for a moment and you think, I don’t like this, why is there so much injustice, maybe I can do something about it…

A flabbergasted voice backtracking intellectual missives comes on over the radio, you’re not sure if it’s in your head or not:
“Revolution is just going around and around, it’s a cycle, it begins with violence and it ends with violence and it only achieves the same power structure that precedes it.”

You think about the French Revolution, the Arab Spring, Anonymous, and realize grass-roots change can rise up from the ground, from the dirt, from the dust whence we came, to challenge the oligarchical deities of the political / corporate aristocracy. We can sell everything we own and buy whole streets collectively, live there together, change the land and what’s on it together. We can join all kinds of innovative communities. We can gather in massive groups and walk through the streets, calling attention to everything corruption has built up around us. We can participate in Civil Disobedience, because the obedience that is asked of us causes harm to someone or something that is alive and is not fairly allowed to defend itself.

No matter how much Ayn Rand and Alan Greenspan and Justin Trudeau tell you that the money will trickle down, no matter how much they tell you that they are the ones who created the railroads, produced the banks, developed the industries that sustain our economies … they didn’t do a damn thing. We laid the tracks, we hammered the spikes, we drove the trains, we maintained the services, we built the buildings, we painted the walls, we fitted the plumbing, we opened the doors, we mopped the floors, we surveyed the land, we mineral tested the rock, we operated the drills, we processed the crude and we shipped the products. None of these things that they presume to own did they make or build. They didn’t put one brick in the wall, they didn’t dig one trench, and they didn’t turn one switch. It’s all ours…

Now an unsettling feeling might skitter across you when you realize that you are implicated in this whole thing. Why do we feel so disenfranchised? Why does the 1% own so much more influence, so much more than we little peons? I feel powerless but every day I participate in the construction of human society. Every action contributes to a massive effect called the singularity of my life. Don’t fall into the kinds of aporia that Jacques Ellul observes in The Technological Society, where no one claims responsibility for the projects of technology. Who made this computer? Was it the engineers, or the design team, the software developers, the hardware makers? Or was it the companies who mined the silver, the petroleum, the zinc, the aluminum, the silicon? No single person in the process can take responsibility for the whole … so no one does, they just accept it, and its justification is its presence.

Well then … we are in a pickle aren’t we? But maybe revolution is the act of taking responsibility? Clips of revolution flicker through your mind-film, you see riots, Molotov cocktails, police lined up with transparent plastic shields. You realize you do not want to risk your comfort, your coziness, your conformity, so you fit in and play nice and salute whoever is in power. Or maybe you are just not interested, you have your soma, your serial monogamy, your fair trade Americano. Besides, you’re too busy, you’ve got kids, you work 60 hours a week, you recently bought a home in one of the most expensive housing markets in the world, you already have enough responsibilities …

1 Response to I Participate