4 Ways to Throw a Monkey Wrench into the War Machine 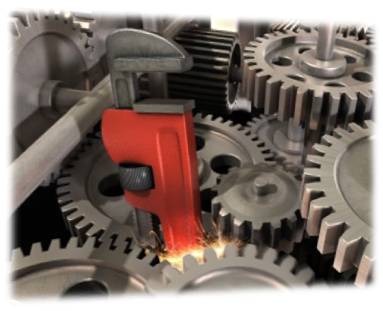 “When a public is stressed and confused, a big lie told repeatedly and unchallenged can become accepted truth.” ~George Orwell

One of the biggest lies told is the false notion that in order to maintain peace, we must have war. Orwellian logic.

As ridiculous as it sounds, the majority of naïve statists believe this notion to be true. This is due, in no small part, to statist conditioning and state-driven propaganda that capitalizes on a blind, patriotic whimsy. And so the war machine continues to rage on, destroying lives, while fattening the pockets of the fat cats at Lockheed Martin and Boeing, not to mention all the other companies which directly and indirectly profit from war. It’s an all-too-common tragedy. But what can you expect when living within an oligarchic plutocracy disguised as a democratic republic? Rhetorical questions aside, there must be ways in which we can, as courageous individuals, throw a monkey wrench into the war machine and thus stop it in its violent tracks.

Here are four ways to do precisely that.

The military chain of command is an antiquated system of leadership that is, unfortunately still in use today. It’s the epitome of a human centipede. Everything just rolls downhill. Like lemmings hell-bent on going over whatever cliff the “higher ranking” lemmings tell them to, the military chain of command is a blatant case of “the blind leading the blind.” Leadership is nothing more than ad hoc authoritarianism disguising a greedy race to the next rank or pay raise. They are not trained to be true leaders who think for themselves; they are brainwashed to be obedient followers that follow orders without question. The entire system is set upon blind obedience.

One way to toss a wrench into the war machine is to teach its members how to courageously and strategically disobey orders, especially immoral ones. Teach them how to put their foot down, how to be a real leader who leads by example, which may, at times, seem like a “bad” example according to the corrupt chain of command, but a “good” example according to health, sustainability, morality, justice, liberty, and truth. Teach them how to be self-empowered human beings first and military members second. Teach them how all things are relative to the observer, especially regarding truth and power. Like Nietzsche said, “All things are subject to interpretation; whichever interpretation prevails at a given time is a function of power and not truth.”

2. Question the Statist Chain of Obedience

“Our scientific power has outrun our spiritual power. We have guided missiles and misguided men.” ~Martin Luther King, Jr.

In today’s day and age, wars exist because of disagreeable nation states, when they could probably be resolved by reasonable men. The problem is most men are made unreasonable by being unwitting, prideful statists with nationalism and patriotism muddying their logic. As Nietzsche said, “In individuals, insanity is rare; but in groups, parties, and epochs, it is the rule.”

In order not to get caught up in the insanity that ends up leading to war, we must, as individuals, question the state-driven chain of obedience being shoved down our throats by the system. The problem is too many people blindly obey, even at the expense of their own freedom and liberty. There’s too much apathy and indifference and not enough logic and reasoning. We’re a nation of misguided statists propagandized and brainwashed to no end. It’s time to upset the rotten-apple cart. It’s time to turn the tables on insanity. It’s time to put the horse of spiritual power (morality), back in front of the cart of scientific power (military). In short: It’s time to disobey.

“Every transformation demands as it’s pre-condition the ending of a world-the collapse of an old philosophy of life.” ~Carl Jung

Patriotism is a tricky thing. It pulls at our heartstrings. It tugs at our pride like puppet strings. And before we know it, we’re a blind patriot, knee-jerk reacting to the prideful boasts of other blind patriots. And suddenly we’re at war. But there is a way out of this unthinking emotional bias: redefine patriotism itself by becoming an interdependent worldly patriot instead of a codependent statist patriot. All it takes is a little imagination, a little logic and reasoning toward the way everything is connected. Then we rise above the statist condition, think outside the statist box, and embrace the world-as-self/self-as-world dynamic as our patriotic start.

“The most useful piece of learning for the uses of life is to unlearn what is untrue.” ~Antisthenes

An anti-war warrior has unlearned what is untrue, and has become an anti-war activist par excellence. Anti-war warriors are peaceful warriors who know when to go Tiananman Square on the war machine. They have made an art form out of civil disobedience, strategic and intelligent with their anti-war activism. When the war machine rears it’s ugly head, anti-war warriors know how to ninjaneer inside and outside the belly of the beast, using the pen just as mightily as the sword to strategically transform statist mindsets and dismantle the machine itself.

At the end of the day, the war machine is still a very real menace that cannot be ignored. We can no longer remain silent to the atrocities of the corrupt nation states that “govern” us. Their wicked war machines have been running rampant over our precious planet for far too long. It’s time we challenged it. It’s time we countered it with logic, reasoning, and thinking outside the statist box. We do this by disobeying all immoral orders passed down from both the chain of command and the chain of obedience. We do it by becoming worldly patriots and anti-war activists with the courage it takes to change the world.

“The greatest threat to our planet is the belief that someone else will save it.” -Unknown