With Over $1 Billion Spent, Domestic Dark Money Dwarfs All Foreign Influence on 2020 Election 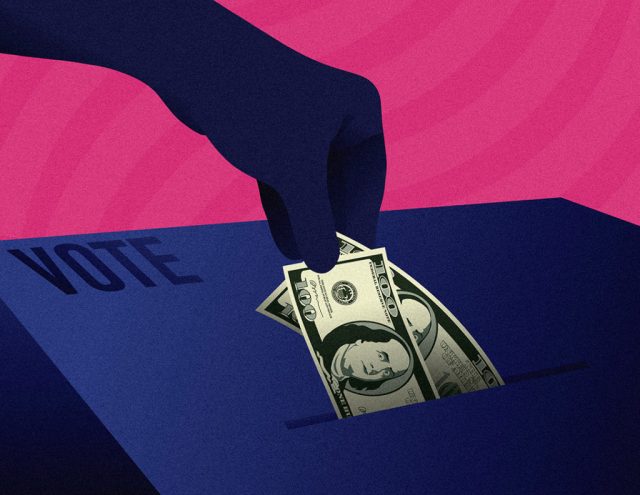 While unapproved foreign interference is a major scandal, corporations and the ultra-wealthy essentially buying elections is simply (big) business as usual.

WASHINGTON — A newly declassified report from the National Intelligence Council (NIC) alleges that a range of U.S. enemies — including Russia, Venezuela, Cuba, Iran and Hezbollah — all attempted to interfere in the 2020 election.

The scope of the supposed interference was relatively minor, amounting to attempts to push false narratives around Democratic nominee Joe Biden, with state media outlets questioning Biden’s credibility or sending out emails meant to confuse or intimidate American voters.

The report offered no evidence for the allegations, arguing that “doing so could endanger sensitive sources and methods and imperil the intelligence community’s ability to collect foreign intelligence.” However, the NIC insisted, the classified report included such evidence and came to the same conclusions.

Despite the lack of substance, and the fact that the intelligence community has continually published outlandish claims about foreign actors’ nefarious roles (which were later rolled back), the report’s release became a major international story, dominating the news cycle and featuring prominently in The New York Times, CNN, MSNBC, ABC News, The Guardian and many other outlets.

The report generated outrage on social media. Movie director turned political activist Rob Reiner summed up the mood among many: “No surprise. Putin launched a massive disinformation campaign in 2020 to help Trump. This time he failed to get him elected. But he was more than successful at poisoning our Democracy. Evidence: Jan.6. To restore faith, Trump must be prosecuted,” he tweeted.

Receiving far less attention was a report published at the same time by the Center for Responsive Politics, which revealed enormous election interference from corporate dark money. More than $1 billion worth of secret donations were made during the 2020 election. This included around $660 million in contributions to big-money political groups, more than $300 million in advertising, and $88 million in FEC-reported spending.

Few people, even political junkies, know the names of these organizations. But dark-money groups — organizations trying to influence politics that do not disclose the source of their funding, such as Duty & Honor and America Votes — have considerably more influence over who rules the United States than do any foreign leaders.

Sauce for the goose?

The largest of these groups in terms of political spending is One Nation America, a Republican organization masterminded by former White House Deputy Chief of Staff Karl Rove. The organization spent over $125 million during the last election cycle.

However, it was the Democrats who benefitted the most from dark money sourced from wealthy, shadowy donors. Democrats outraised the GOP by well over two-to-one, with Biden’s bid attracting more than six times the amount of money from anonymous sources than did Trump’s. Given the relatively close race, it is entirely plausible that this massive cash injection swung the balance in favor of the 78-year-old Delawarean and away from the incumbent.

In 2016, the St. Petersburg-based “troll farm” the Internet Research Agency is said to have spent around $100,000 in online ads targeting American readers. But four years later, the Center for Responsive Politics calculates that opaque non-profits shelled out $132 million on the same thing — more than a thousand times as much.

In politics, money talks. Since 2000, the party spending the most cash has won between 85% and 98% of all House and 71% and 85% of all Senate races, depending on the year. Election 2020 was by far the costliest election in history, coming in at $14.4 billion. That figure is more than double the price of the 2016 election, which cost around $6.5 billion. The six most expensive Senate races of all time occurred in this cycle. Democrats comfortably outraised and outspent Republicans in 2020.

The two Senate elections in Georgia — regular and special, which both went to runoffs that saw Democrats Jon Ossoff and Raphael Warnock elected — wound up with nearly $830 million spent on the two races alone. Democrats relied on hefty donations from tech companies like Apple, Microsoft, Facebook, and AT&T, while Republicans counted on support from financial firms like Goldman Sachs and Bank of America and from money from the Koch Brothers.

This disparity in coverage between the two reports suggests that, while unapproved foreign interference is a major scandal, corporations and the ultra-wealthy essentially buying elections is simply (big) business as usual.