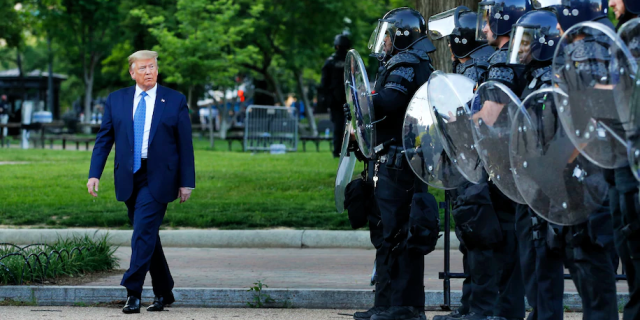 Anti-racist protests have swept across the country over the past month, demanding justice for George Floyd, police accountability and the defunding of law enforcement.

In response to these uprisings, President Donald Trump publicly toyed with the idea of deploying active-duty military to American cities—a proposal that most corporate media, with a few glaring exceptions, have condemned as an abuse of power.

However, when we look at who media have called upon to denounce the Trump administration’s response, a revealing pattern emerges. Rather than providing a platform for protesters, who were met by heavily armed law enforcement toting chemical agents and flashbang grenades, media decided to turn to the enforcers of state violence abroad: the US national security apparatus. Several outlets asked current and former intelligence officials to weigh in on Trump’s response, utilizing their testimony to equate the crackdowns with those in other countries:

These articles are correct in pointing out that Trump’s militarized suppression of dissent at home has “troubling parallels” with authoritarian crackdowns abroad. The testimony of US state officials, especially former ones, can aid the public in taking cognizance of these parallels, given that they are responsible for enforcing similar crackdowns around the world. But because media present these sources uncritically and refuse to include vital context, they fail to examine our own empire, and ultimately make all the wrong connections.

In response to the Trump administration’s handling of the protests, the Post article includes a quote from Marc Polymeropoulos, who spent 26 years in the CIA:

“It reminded me of what I reported on for years in the Third World,” Polymeropoulos said on Twitter. Referring to the despotic leaders of Iraq, Syria and Libya, he said: “Saddam. Bashar. Qaddafi. They all did this.”

While it’s true that Trump’s response has been militant, these articles present this reaction as a disturbing departure from otherwise morally sound US leadership throughout history. Trump may be the first US president to tweet the words, “When the looting starts, the shootings starts,” but despite media’s historical amnesia, violent government crackdowns on anti-racist protests in the US have always been the norm, not the exception.

Take, for example, the FBI’s COINTELPRO program, which targeted thousands of activists through tactics like psychological warfare, blackmail and assasination. Or when the Philadelphia Police Department dropped a bomb on a residential neighborhood in order to disband a Black liberation group, killing nearly a dozen people and leaving hundreds of residents homeless. More recently, the FBI’s counterterrorism division has labeled “Black identity extremists” as a domestic terror threat, due to their “perceptions of police brutality against African Americans.”

By relying on CIA testimony, media shift the focus away from the tyranny in our own backyard in favor of pointing fingers at the “despotic leaders” of “the Third World”—never mind the fact that the US has no qualms with oppressive leadership in the Middle East when it aligns with our interests, as evidenced by our alliance with Saudi Arabia.

The articles by the Post and International Business Times both include a quote from Rep. Abigail Spanberger, who tweeted, in response to Trump’s crackdowns on protests: “As a former CIA officer, I know this playbook.” Her tweet goes on to compare his actions to those “undertaken by authoritarian regimes throughout the world.”

Of course Spanberger, as a former CIA official, knows this playbook—it’s one that the CIA practically wrote themselves. In 1973, it sponsored a coup that overthrew Chile’s democratically elected socialist government, installing the autocratic Augusto Pinochet, who rounded up, tortured and executed thousands of political dissidents. The CIA also opposed democratic forces in Zaire and backed the corrupt dictator Mobutu, whose decades-long regime regularly tortured and murdered its critics. And in the early 2010s, the Pentagon armed and trained Turkish mercenary forces, who went on to commit a litany of war crimes, including beheading Kurds in Northern Syria.

But the Post presents Spanberger’s intimate knowledge of this “playbook” as a result of her experience “monitoring democratic regression” and “societal unraveling” in the Global South. Another CIA analyst, Gail Helt, is described as “responsible for tracking developments in China and Southeast Asia.”

Nowhere in these articles is there any admission that the US national security apparatus does not just “track developments” abroad—it also plays a monumental role in shaping those developments, often using the same tactics of brutality and repression they claim to oppose.

By looking to state agents for moral authority and failing to provide any context that would impugn the CIA’s legitimacy, media espouses US imperialism by default, and reaffirms the chauvinistic belief that we have the right to impose our will on other countries by any means necessary.

The Post includes a quote from Brett McGurk, who helped institutionalize America’s bloody imperial occupation of Iraq, and pushed for the euphemistic “surge” which saw an additional 30 thousand US troops deployed to Iraq in 2007:

“The imagery of a head of state in a call with other governing officials saying, ‘Dominate the streets, dominate the battlespace’ — these are iconic images that will define America for some time,” said McGurk…. “It makes it much more difficult for us to distinguish ourselves from other countries we are trying to contest” or influence, he said.

But whether or not the US has ever had the credibility required to shape other countries’ policies—let alone present ourselves as a model of freedom and democracy—remains largely unexamined.

This is especially evident in the piece by Post, which claims that the Trump administration’s response characterized “US cities as a foreign war zone” and includes an anecdote about a US intelligence official “venturing into downtown Washington…as if taking measure of the street-level mood in a foreign country.”

The Independent describes “helicopters with US Army markings flying low over protesters,” a technique that one of the pilots they interviewed says is “for use against enemy insurgents overseas, not Americans protesting on the streets of Washington.”

In other words, when Defense Secretary Mark T. Esper urged governors to “dominate the battlespace” to end the unrest in cities, it was wrong only because he was talking about American cities.

The Independent article later includes a quote from ex–CIA officer Patrick Skinner, who has previously provided valuable insight into the ways that fascist maneuvers abroad inevitably make their way home. Skinner correctly condemns a dangerous “mentality among police that they are soldiers in a ‘war on crime.’”

If media had any real interest in exposing the reciprocity between urban policing at home and counterinsurgency abroad, as these articles supposedly propose, this would have been a good time for them to delve into the many ways in which the American carceral state and our endless wars in the Middle East are intrinsically connected.

Perhaps they could include that the tactic used to murder George Floyd—the knee on the neck—has also been used by the Israeli Defense Forces, who are bankrolled by the US and frequently provide training for American cops, including those in Minnesota.  (As many have pointed out, there are stark parallels between the police murder of George Floyd and the police murder of Iyad Halak, an unarmed, autistic Palestinian man whose killing has sparked protests in Jerusalem.)

Or media could mention other tactics that police, many of whom are military veterans, have picked up over years of continuous warfare: the use of torture to get confessions, stop- and-frisk searches targeting blacks and Latinos, and invasive surveillance techniques aimed at Muslim residents. Also relevant is the fact that, since the 1990s, the military has given police departments billions of dollars worth of surplus equipment—including tanks, grenade launchers and assault weapons—with a requirement that they make use of it within a year.

When done right, international analysis in times of domestic upheaval can shed light on the shared, global struggle for liberation against US occupation and militarism—a movement which spans from Minneapolis to Palestine.

But, as is inevitable when they uncritically look to the CIA for “expertise” on freedom and human rights, media come to an entirely different conclusion: It’s normal, necessary and perhaps even noble—after all, it is in the name of democracy—for our military tanks to line the streets of the Middle East. But when those same military tanks invade DC, New York or Minneapolis, they’ve gone too far.

Sidelining activists to uplift the state

This reliance on state agents to shape the narrative is also a staple of network Sunday morning political talk shows. In the two weeks after the police murder of George Floyd, FAIR analyzed every episode of ABC’s This Week, CBS’s Face the Nation, CNN’s State of the Union, Fox News Sunday, and NBC’s Meet the Press. Across all networks, only one show featured an interview with someone affiliated with Black Lives Matter in its coverage of the protests. However, every network found time to interview current and former members of the US national security apparatus, resulting in 12 appearances altogether.

Among these guests was Chad Wolf, secretary of the Department of Homeland Security, who was asked to weigh in on the protests by ABC’s This Week (6/7/20) and Fox News Sunday (6/7/20). He spoke in support of Trump’s call to send active-duty troops to quell the uprisings—a predictable stance, given that, as one of the architects of the family separation policy, Wolf’s response to undocumented migration has been to take at least 4,000 children away from their parents and imprison them in cages. Despite this horrifying resume, NBC and Fox still saw it fit to give him a platform on national television to share his thoughts on state violence.

One of the guests featured on CNN’s State of the Union (5/31/20) was Robert O’Brien, the US National Security advisor, who has long defended the  indefensible—including Trump’s pardon of war criminals, and the assassination of Iranian military leader Qassem Solemani. Like Wolf, he denied the irrefutable fact that US law enforcement is intertwined with systematic racism—a declaration that was barely challenged by CNN’s Jake Tapper.

Only moments after defending Trump’s militaristic response to the uprisings, O’Brien favorably compared the US attitude towards the protests with other countries: “That’s the difference between us and our foreign adversaries. We’re going to allow people to protest.” Given that the US has arrested at least 10,000 protesters (AP, 6/4/20), this seems like a dubious distinction.

This is not to say there’s no value in interviewing former intelligence officials; some have provided valuable insight on the military/industrial complex, and many have provided critical information as whistleblowers.

Much more frequently, however, these interviews serve only to legitimize US authoritarianism abroad and whitewash state violence at home. As protesters take to the streets, facing tear gas, rubber bullets and arrest for demanding change, perhaps instead of uplifting the voices of state officials, media should hand the microphone to the people.