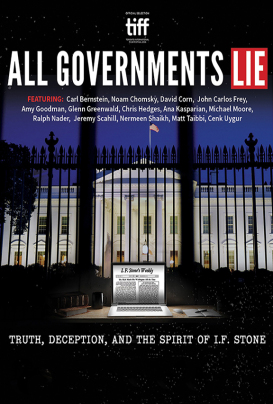 Truth, Deception, and the Spirit of I.F. Stone

With government deception rampant, and intrusion of state surveillance into private life never more egregious, independent voices like Glenn Greenwald, Jeremy Scahill, and Amy Goodman are crucially important. All three are inspired by the iconoclastic rebel journalist named I. F. Stone, whose fearless, independent reporting from 1953 to 1971 filled a tiny 4-page newsletter which he wrote, published and carried to the mailbox every week.

This documentary will change the way you look at the mainstream media. Giant media conglomerates are increasingly reluctant to investigate or criticize government policies, particularly on defense, security and intelligence issues.

Watch the film on Kanopy here.