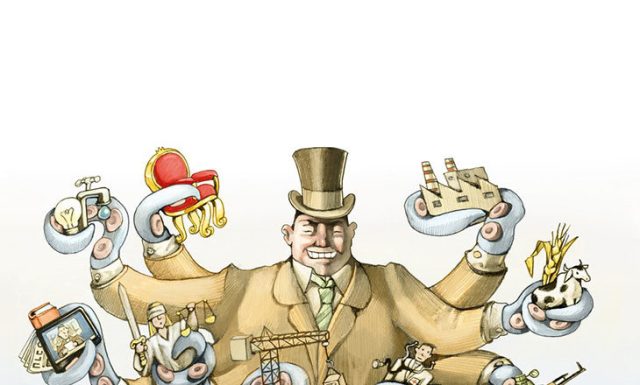 Have you noticed? From Hong Kong to Baghdad, Paris to Tehran, 2019 is shaping up to be, as the New York Times dubbed it, “the year of the protest.” Violent—and often deadly—anti-government protests are breaking out throughout the world in an unprecedented fashion, in rich countries as well as poor, as people everywhere are expressing their anger at corrupt, inefficient, brutal, and unresponsive regimes.

But what isn’t so much in the news is worse—worse enough that they don’t want to tell you. At the moment, there are no less than 65 countries are now fighting wars—there are only 193 countries recognized by the United Nations, so that’s a third of the world. These are wars with modern weapons, organized troops, and serious casualties—five of them, like Afghanistan, Libya, Syria, Somalia, and Yemen, with 10,000 or more deaths a year, another 15 with more than 1,000 a year—all of them causing disruptions and disintegrations of all normal political and economic systems, leaving no attacked nation in a condition to protect and provide for its citizens. From 2015 to 2019 more state-based conflicts were engaged in than at any time since World War II, with an estimated 1 million deaths in all.

In addition, there are at least 638 other conflicts between various insurgent and separatist militias, armed drug bands, and terrorist organizations, increasing each year as states fail or collapse completely.

What has made the wars and internal disputes even more egregious as the years go on is that chaotic weather has a direct effect on how societies function. Agriculture, of course, is impacted by higher temperatures, lack of rain, droughts, and wildfires, and crops have failed in many places over the last five years, including North and Central Africa, the Middle East, India, Pakistan, northern China, northern Europe, Argentina, Brazil, Central America, and even parts of North America. The collapse of Syria, for example, and subsequent civil wars were made more devastating if not directly caused by the drought of 2006-2011, in which 75 per cent of the farms failed and 85 per cent of the livestock died. And an official United Nations report in 2019, by 100 experts from 52 countries, warned that things will only get worse, with the world’s land and water resources exploited at “unprecedented rates,” threatening “the ability of humanity to feed itself.”

One obvious consequence, beyond death, famine, disease and starvation, is, as the U.N. report’s lead author says, “a massive pressure for migration,” a desperate attempt to find some refuge and relief when homes have been destroyed and families are uprooted. According to the United Nations, in what I regard as a certain undercount, in 2019 there were 272 million migrants worldwide, up from 258 million in 2017, with the weather in 2019 causing more refugees even than warfare. (The unprecedented crisis at the U.S. southern border in 2019 is only one manifestation of the porous and chaotic collapse of boundaries across the Americas, Africa, and most of Asia.) And meanwhile, the International Committee of the Red Cross in 2018 estimated that more than 100,000 people are simply “missing,” a figure it admits “represents only a fraction” of those who are unaccounted for by any government or organization.

Given the turmoil over wars and immigration threats, it is not surprising that half the world is without coherent government.

Organizations that track these things say that of the 174 covered nations, 76 are in various stages of collapse—that would be 43 per cent—and that excludes a dozen smaller nations that are locked into autocracy and poverty. These include seven completely failed states—Congo-Brazzaville, Central African Republic, Syria, Yemen, Somalia, South Sudan, and Venezuela—and another seven that are on the edge—Guinea, Haiti, Iraq, Zimbabwe, Afghanistan, Chad, and the Sudan—plus 19 that are in an “alert” category, meaning that some but not all government functions have failed, 15 in Africa and 4 in Asia.

In other words, many political systems in the world have effectively collapsed, people are dispossessed and without governments, and almost everywhere else, including the U.S. and Europe, governments are severely strained and political rifts abound. The vote for Brexit in the U.K., the election of Donald Trump (and the subsequent attempts to overturn it), the turmoil that erupted in December 2018 in France and Belgium, the continued protests in Poland were all examples of the population of developed nations coming to see that the attempt to establish capitalist-led democracies in an internationalist arrangement of benefit to corporate and banking interests just was not working, and a rising segment of what were called “deplorables” in America did not want any longer to be powerless, manipulated, and disdained. These turmoils also demonstrated that the established powers in these countries, especially the U.S. and Britain, resisted all of these attempts to change the status quo and in effect ignored or tried to thwart the popular will (cf. the “impeachment” farce)—the developed world’s form of the failed state. Those fissures have widened as the years have worn on, and as one astute observer, James Kunstler, put it in 2019, “The West is enduring paroxysms of political uproar and disenchantment.”

And here’s something weird that sums it all up. It is the opinion of two recent political scientists that “the state system seems to be failing all over the world,” and they have proposed a new study called “archy” to examine how to grow, maintain, and fund states so as to avert their collapse. No better evidence of the seriousness of the world’s “uproar and disenchantment” can there be when academics need to create a discipline to overcome it.

Yeats summed it up some years ago: “The center cannot hold. Mere anarchy is loosed upon the world.”

Kirkpatrick Sale’s new book The Collapse of 2020 will be published in January.