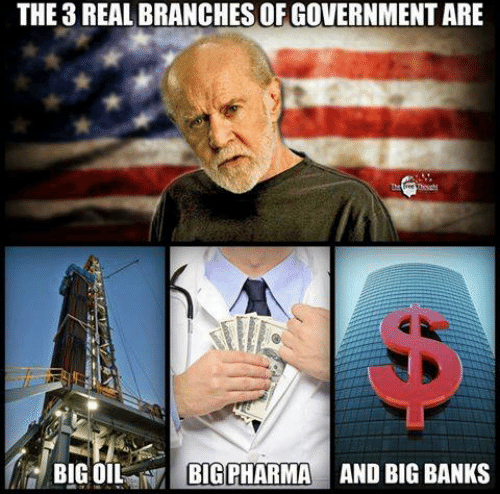 Various definitions of terrorism have been proposed in recent years, by organizations such as the FBI, the State Department, Homeland Security, and the ACLU. Some common threads persist throughout the definitions: violence, injury or death, intimidation, intentionality, multiple targets, political motivation. All the criteria are met by pharmaceutical and oil and financial companies. They have all injured and intimidated the American public, and caused people to die, with intentionality shown by their refusal to acknowledge evidence of their misdeeds, and political motives clear in their lobbying efforts, where among all U.S. industries Big Pharma is #1, Big Oil is #5, and Securities/Investment #8.

The terror inflicted on Americans is real, and is documented by the facts to follow.

In a Time Magazine article a young man named Chad Colwell says “I got prescribed painkillers, Percocet and Oxycontin, and then it just kind of took off from there.” Time adds: “Prescriptions gave way to cheaper, stronger alternatives. Why scrounge for a $50 pill of Percocet when a tab of heroin can be had for $5?” About 75% of heroin addicts used prescription opioids before turning to heroin.

Any questions about Big Pharma’s role in violence and death in America have been answered by the Centers for Disease Control and the American Journal of Public Health. Any doubts about Big Pharma’s intentions to intimidate the public have been put to rest by the many occasions of outrageous price gouging. And any uncertainty about political pressure is removed by its #1 lobbying ranking.

As for malicious intentions, Bernie Sanders noted, “We know that pharmaceutical companies lied about the addictive impacts of opioids they manufactured.” Purdue Pharma knew all about the devastating addictive effects of its painkiller Oxycontin, and even pleaded guilty in 2007 to misleading regulators, doctors, and patients about the drug’s risk. Now Purdue and other drug companies are facing a lawsuitfor “deceptively marketing opioids” and ignoring the misuse of their drugs.

No jail for the opioid pushers, though, just slap-on-the-wrist fines that can be made up with a few price increases. But partly as a result of Pharma-related violence, Americans are suffering “deaths of despair”— death by drugs, alcohol and suicide. Suicide is at its highest level in 30 years.

Any doubts about the ecological terror caused by fossil fuel companies have been dispelled by the World Health Organization, the American Lung Association, the United Nations, the Pentagon, cooperating governments, and independent research groups, all of whom agree that human-induced climate change is killing people.

The oil industry’s intentionality and political motives have been demonstrated by their refusal to admit the known truth, starting with Exxon, which has covered up its own climate research for 40 years, and continuing through multi-million dollar lobbying efforts by Amoco, the US Chamber of Commerce, General Motors, Koch Industries, and other corporations in their effort to dismantle the Kyoto Protocol against global warming.

Any doubts about the violence stemming from the 2008 mortgage crisis have been resolved by studies of recession-caused suicides. Both the British Journal of Psychiatry and the National Institutes of Healthfound definite links between the recession and the rate of suicides.

As with Big Pharma and Big Oil, intentionality and political motives are evident in the banking industry’s lobbying efforts on behalf of deregulation — leading to the same conditions that threatened American homeowners in 2008. There has also been a surge in the number of non-bank lenders, who are less subject to regulation.

Making it all worse are private developers, who make most of their profits by building fancy homes for the rich. And by avoiding affordable housing. Since the recession, Blackstone and other private equity firms — with government subsidies — have been buying up foreclosed houses, holding them till prices appreciate, and in the interim renting them back at exorbitant prices.

This is leaving more and more Americans out in the cold — literally. A head of household in the U.S. needs to make $21.21 an hour to afford a two-bedroom apartment at HUD standards, much more than the $16.38 they actually earn. Since the recession, the situation has continually worsened. From 2010 to 2016 the number of housing units priced for very low-income families plummeted 60 percent.

Here’s the big picture: Since the 1980s there’s been a massive redistribution of wealth from middle-class housing to the investment portfolios of people with an average net worth of $75 million. It’s not hard to understand the “deaths of despair” caused by the terror inflicted on people losing their homes.