Biggest Nunes Memo Revelations Have Little To Do With Its Content

Posted on February 9, 2018 by Luther Blissett 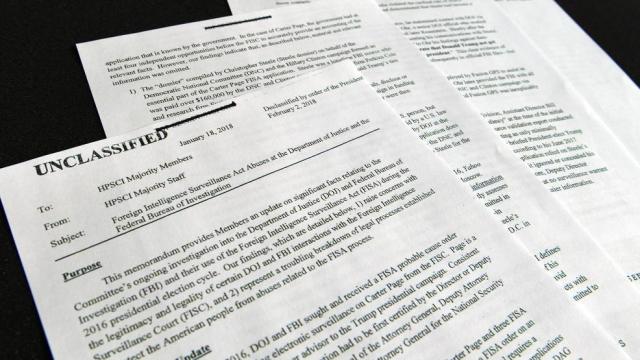 It’s fitting that the ever-tightening repetitive loops of America’s increasingly schizophrenic partisan warfare finally hit peak shrillness and skyrocketed into a white noise singularity on Groundhog Day. Right now, we’re right about at the part of the movie where Bill Murray is driving over a cliff in a pickup truck with a large rodent behind the wheel.

If you only just started paying attention to U.S. politics in 2017 what I’m about to tell you will blow your mind, so you might want to sit down for this: believe it or not, there was once a time when both of America’s mainstream political parties weren’t screeching every single day that there was news about to break any minute now which would obliterate the other party forever. No Russiagate, no Nunes memo, no Rachel Maddow red yarn graphs, no Sean Hannity “tick tock,” no nothing. People screaming that the end is nigh and it’s all about to come crashing down were relegated to street corners and the occasional Infowars appearance, not practicing mainstream political punditry for multimillion dollar salaries on MSNBC and Fox News.

I’m not saying it’s a bad thing that Americans are starting to look critically at the power dynamics in their country, but the partisan filters they’ve pulled over their eyes are causing mass confusion and delusion. Now everyone who questions the CIA is a Russian agent and the term “deep state” suddenly means “literally anyone who doesn’t like Donald Trump.” Your take on the contents of the Nunes memo will put you in one of two radically different political dimensions depending on which mainstream cult you’ve subscribed to, and it will cause you to completely miss the point of the entire ordeal.

The part of the memo that has everyone talking today reads as follows: “Furthermore, Deputy Director McCabe testified before the Committee in December 2017 that no surveillance warrant would have been sought from the FISC without the Steele dossier information.”

This refers to a surveillance warrant requested by the FBI’s then-Deputy Director Andrew McCabe from the Foreign Intelligence Surveillance Court seeking permission to spy on the communications of Carter Page, a member of the 2016 Trump campaign. The controversy revolves around the claim that this surveillance warrant would never have even been requested if not for the clearly biased, Clinton-funded, and error-riddled Christopher Steele dossier which is acknowledged even by its former MI6 author to be 10 to 30 percent inaccurate.

Combine that with the fact that this has never been made clear to the public, and baby you’ve got yourself a scandal. The FBI knowingly using extremely tainted evidence from one presidential campaign to get permission to spy on another would indeed be a very big deal.

There are some problems with the “BOOM! Bigger than Watergate!” exclamations that pro-Trump partisans have been parading around about this, however. The first is that the memo is only an internal communication between Republican congressmen; it’s not a sworn testimony or legal transcript or anything legally binding. It’s basically just some Republican ideas about what happened. The assertions made therein are reportedly being hotly contested by Democrats with knowledge of the situation, which is in turn being disputed by Republicans.

Another thing putting a damper on the GOP’s “KABOOM!” parade is the fact that the memo’s contents are not even entirely new; CNN reported way back in April of last year that sources had informed them that the Steele dossier had been used to get a FISA warrant on the Trump campaign. Additionally, even if every single allegation in the memo is true, the revelations are still arguably far less earth shattering than the Edward Snowden revelations of 2013 exposing the NSA’s sprawling domestic espionage network, so the expectation that these less significant new revelations would cause a radical transformation in U.S. politics when the Snowden revelations did not seems highly unrealistic.

Nonetheless, there have been some extremely important revelations as a result of this memo; they just haven’t come from the contents of the memo itself. In the same way that cybersecurity analysts observe the metadata underlying hacked files rather than the contents of the files themselves, political analysts have been pointing out that a lot can be learned about the political establishment by looking at its response to the possibility of the memo’s release.

“Memo is clearly not a blockbuster. We can tell so by reading it. Which makes Dems’ frantic efforts to prevent anyone from reading it seem even more bizarre,” observed TYT’s Michael Tracey. “Veracity of memo’s claims aside, we were told that its release would undermine the rule of law. So, just checking: is the rule of law still in tact?” he added later.

“Now it is clear to all,” WikiLeaks’ Julian Assange tweeted. “The claims about how the ‘Nunes’ memo would destroy ‘national security’ were lies. Classification stickers are used by bureaucrats trying to obtain ‘political security’ for their cronies.”

“One effect of the memo – it’s an example of how extensively we overclassify information,” wrote National Review’s David French. “I’m highly dubious that any information disclosed threatens national security in any way, shape, or form. I’d be willing to bet the Dem response is similarly harmless. Release it.”

Indeed, both the FBI and high-profile Democrats have been claiming that the memo’s unredacted release would pose a national security threat, with California Congressman (and virulent Russiagater) Eric Swalwell going so far to call it “brainwashing.” A CNN panelist wandered completely off the paddock and suggested that yesterday may have been America’s last day as a democracy. Why were they all flipping out so hysterically over a release of information that plainly poses no threat to the American people?

In addition to Assange’s assertion that government secrecy has far less to do with national security than political security (a claim he has made before which seems to be proving correct time and time again), there’s the jarring question posed by Republican Congressman Thomas Massie: “who made the decision to withhold evidence of FISA abuse until after Congress voted to renew FISA program?”

Whoa, Nelly. Hang on. What is he talking about?

It would be understandable if you were unaware of the debate over the reauthorization of FISA surveillance which resulted in unconditional bipartisan approval last month – the mainstream media barely touched it. In point of fact, though, the very surveillance practices alleged to have been abused in this hotly controversial memo are the same which was waved through by both the House and the Senate, and by the very same people promoting the memo in many cases.

The McCabe testimony was in December. FISA was renewed in January. Why is all this just coming out now? If the Republicans truly believed that McCabe said what the memo claims he said, why wasn’t the public informed before their elected representatives renewed the intelligence community’s dangerously intrusive surveillance approval? Was this information simply forgotten about until after those Orwellian powers had been secured?

Of course not. Don’t be an idiot.

This makes the kicking, screaming, wailing and gnashing of teeth by the political establishment make a lot more sense, doesn’t it? Now suddenly we’re looking at a he-said, she-said partisan battle over an issue which can only be resolved with greater and greater transparency of more and more government documents, and we can all see where that’s headed. In their rush to win a partisan battle and shield their president from the ongoing Russiagate conspiracy theory, the Republicans may have exposed too much of the establishment foundation upon which both parties are built.

The term “deep state” does not mean “Democrats and Never-Trumpers” as Republican pundits would have you believe, nor does the term refer to any kind of weird, unverifiable conspiracy theory. The deep state is in fact not a conspiracy theory at all, but simply a concept used in political analysis for discussing the undeniable fact that unelected power structures exist in America, and that they tend to form alliances and work together in some sense.

The deep state is America’s permanent government, the U.S. power structures that Americans don’t elect. These power structures plainly have a vested interest in keeping America’s Orwellian surveillance structures in place, as evidenced by the intelligence community’s menacingly urgent demand for FISA renewal back in December. If there’s any thread to be pulled that really could make waves in the way Official Washington (hat tip to the late Robert Parry) operates, it is in the plot holes between the bipartisan scramble toward unconditional surveillance renewal and the highly partisan battle over exposing the abuse of those very powers.

If we’re going to see a gap in the bars of our cages, that’s a great place to keep our eyes trained, so keep watching. Watch what happens in a partisan war where both parties have a simultaneous interest in revealing as little of the game as possible and exposing the other party. Things could get very interesting.