Posted on September 27, 2017 by Luther Blissett 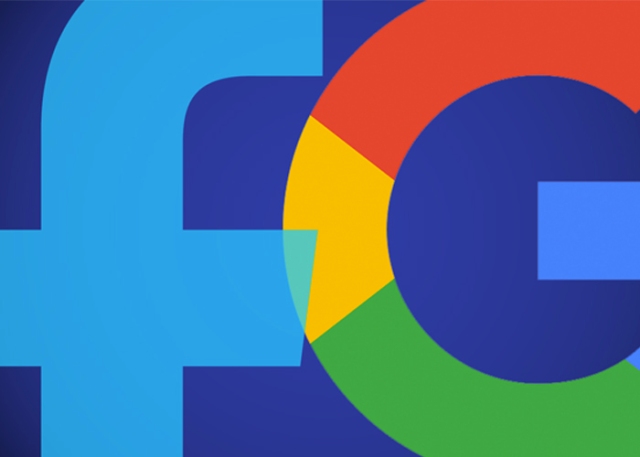 To qualify as colonial powers, Facebook and Google must effectively limit the choices and power of users, and punish or coerce those who question or resist their power.

I was struck by a phrase from a recent essay on advertising and social media, You Are the Product: As Taplin points out, that remark ‘unwittingly revealed a previously unspoken truth: Facebook and Google are the new colonial powers.’

As you’ve no doubt noticed, the dominance of Facebook and Google in online advertising is now “in the news” for a variety of reasons: the possibility that agents of other governments influenced U.S. elections with media buys on Facebook; anti-trust concerns; the potential for these advert-tech giants to effectively silence legitimate online voices under the guise of limiting “fake news”, and of course, the ongoing issues of click fraud and the underperformance of digital ads.

The phrase that captures this broad narrative is: When an online service is free, you’re not the customer. You’re the product.

In other words, if you’re not paying for the service or content, then your information (harvested by Google, Facebook, et al.), your time online (i.e. your attention, a.k.a. eyeballs) and the content you create and post for free (videos of your cute cat, etc.) are the products being sold to advertisers at a premium.

The characterization of the two dominant digital-advert giants as new colonial powers is interesting on a number of fronts. To get a handle on a few of the issues, I recommend reading these two essays:

A Serf on Google’s Farm

Lost Context: How Did We End Up Here?

And watching this video on the archiving of digital information on individuals–including meta-data, that is, data about your behaviors, transactions, posts, etc. that have been scrubbed of your identity markers (name, account numbers, etc.)

The key dynamics of colonialism for the residents are 1) a lack of choice and 2) a lack of power: the colonial power imposes a regime, either formally or informally, that limits the choices enjoyed by residents and limits their power to bypass or replace the colonial regime.

In the classic Plantation Economy of overt colonialism–a topic I’ve discussed numerous times here–residents are stripped of any options other than working on the plantation and buying their goods at the plantation store. This coercion need not be direct; the colonial regime can strip residents of choice and power by making it impossible to live without cash, for example, and then providing one source of paid work: the plantation.

Once cash is necessary to live, then credit is introduced–but only if you buy at the company store.

I’ve also written extensively about the Neo-Colonial Model in which corporations and banks bring the colonial model of exploitation to the home country, stripmining the domestic populace via dependence on credit.

Greece and the Endgame of the Neocolonial Model of Exploitation (February 19, 2015)

The E.U., Neofeudalism and the Neocolonial-Financialization Model (May 24, 2012)

This model is also used in the developing world, where it has replaced the old overt form of Colonialism with the new and improved credit-based version.

To qualify as colonial powers, Facebook and Google must effectively limit the choices and power of users, and punish or coerce those who question or resist their power. As the dominant corporations in search, social media and digital advertising, Facebook and Google limit the options of users simply by being essential due to their dominance.

As for punishing users–the potential to do so is what’s worrying observers. The cover for silencing or banning critics is opaque: non-compliance with guidelines. So who’s to say that users who criticized or questioned the policies of Facebook and Google aren’t silenced along with click-fraudsters, “fake news” purveyors, etc.? Who gets silenced is completely up to the companies, and there is no recourse to the corporation’s opaque judgment.

The Orwellian possibilities are real enough.

Here’s a look at the digital advert market: 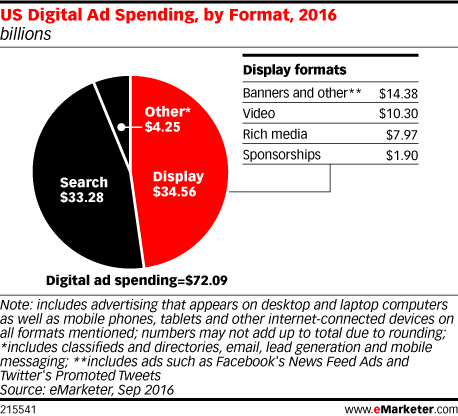 And the dominance of Google/Facebook: 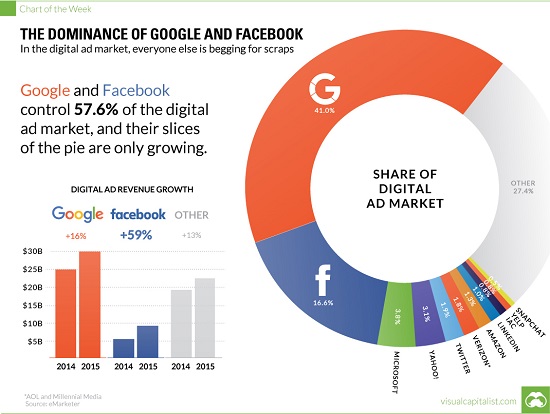 1 Response to Are Facebook and Google the New Colonial Powers?