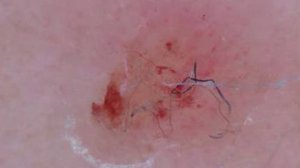 She no longer performs because she has a rare medical condition, Morgellons syndrome, and because decades of chain-smoking have ravaged her once-angelic voice.

It’s a huge tragedy that someone of her talent can no longer sing, but what was truly surprising to me was the revelation that she has Morgellons syndrome. It’s truly courageous for someone as well-known and widely respected as Mitchell to go public about it because people suffering from Morgellons have often been dismissed by the medical establishment as being “delusional”. The issue is clouded by the fact that reported physical symptoms of Morgellons syndrome are indeed similar to delusional parasitosis and in some cases it may also have neurological symptoms (though in most reported cases the symptoms include brain fog, fear, depression, decreased coordination and personality changes rather than delusions).

Joni Mitchell related her personal experience with Morgellons in this excerpt from a 2010 LA Times interview:

LAT: You’ve come out in the media as a sufferer of a controversial condition known as Morgellons. How is your health currently?

JM: I have this weird, incurable disease that seems like it’s from outer space, but my health’s the best it’s been in a while, Two nights ago, I went out for the first time since Dec. 23: I don’t look so bad under incandescent light, but I look scary under daylight. Garbo and Dietrich hid away just because people became so upset watching them age, but this is worse. Fibers in a variety of colors protrude out of my skin like mushrooms after a rainstorm: they cannot be forensically identified as animal, vegetable or mineral. Morgellons is a slow, unpredictable killer — a terrorist disease: it will blow up one of your organs, leaving you in bed for a year. But I have a tremendous will to live: I’ve been through another pandemic — I’m a polio survivor, so I know how conservative the medical body can be. In America, the Morgellons is always diagnosed as “delusion of parasites,” and they send you to a psychiatrist. I’m actually trying to get out of the music business to battle for Morgellons sufferers to receive the credibility that’s owed to them.

As disturbing as symptoms of Morgellons Syndrome are, just as frightening is the fact that we know so little about what it is, what causes it, hows it’s transmitted, and how to cure people who have it. However, in this article recently reposted at GlobalResearch, they uncovered the following information linking Morgellons to GMOs:

In the Sept. 15-21 issue of New Scientist magazine, Daniel Elkan describes a patient he calls “Steve Jackson,” who “for years” has “been finding tiny blue, red and black fibers growing in intensely itchy lesions on his skin.” He quotes Jackson as saying, “The fibers are like pliable plastic and can be several millimeters long. Under the skin, some are folded in a zigzag pattern. These can be as fine as spider silk, yet strong enough to distend the skin when you pull them, as if you were pulling on a hair.”

Doctors say that this type of disease could only be caused by a parasite, but anti-parasitic medications do not help. Psychologists insist that this is a new version of the well-known syndrome known as “delusional parasitosis.” While this is a “real” disease, it is not a physically-caused one.

But now there is physical evidence that Morgellons is NOT just psychological. When pharmacologist Randy Wymore offered to study some of these fibers if people sent them to him, he discovered that “fibers from different people looked remarkably similar to each other and yet seem to match no common environmental fibers.”

When they took them to a police forensic team, they said they were not from clothing, carpets or bedding. They have no idea what they are.

Researcher Ahmed Kilani says he was able to break down two fiber samples and extract their DNA. He found that they belonged to a fungus.

An even more provocative finding is that biochemist Vitaly Citovsky discovered that the fibers contain a substance called “Agrobacterium,” which, according to New Scientist, is “used commercially to produce genetically-modified plants.” Could GM plants be “causing a new human disease?”