The Coming War on Wealth and the Wealthy 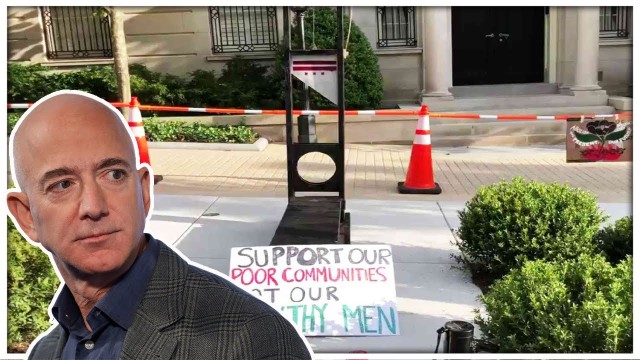 Here’s looking at you, Federal Reserve–thanks for perfecting ‘legalized looting’ and neofeudalism in America.

The problem with pushing a pendulum to its maximum extreme on one end is that it will swing back to the other extreme minus a tiny bit of friction.

America has pushed wealth/income inequality, unfairness and legalized looting to the maximum extreme. Now it will experience the swing back to the other extreme. This will manifest in a number of ways, one of which is a self-organizing populist war on wealth and the wealthy.

To say the system is rigged to benefit the already-wealthy and powerful is a gross understatement. Take the tax code as an example–thousands of pages of arcane tax breaks and giveaways passed by a thoroughly corrupted Congress and thousands more pages of arcane regulations and legal precedents.

How many pages apply to the bottom 95% of American taxpayers? Very few. There’s the standard deductions for mortgage interest, healthcare costs, etc., but virtually no other tax breaks. Very few pages apply to even the 99%–go talk to a CPA and you’ll find there are no more tax breaks for a sole proprietor making $500,000 in earned income than than there are for a sole proprietor making $50,000.

99.9% of the tax code benefits the top 0.1% and the corporations, LLCs and philanthro-capitalist foundations and trusts they own / control. Stripped of artifice and spin, America’s tax code is nothing but legalized looting. This is only one small slice of the entire pie of legalized looting, of course, but it’s one we can all understand.

There’s a term for this disparity / injustice / unfairness: legalized looting. The super-wealthy pay essentially zero percent of their income and wealth to the programs that provide basic economic security for the disabled/elderly citizenry, while Jose the sole proprietor pays 15.3% of every dollar he earns.

Needless to say, if this most basic fairness was applied to America’s wealthy and powerful, these programs would not be facing insolvency.

Could America’s super-wealthy / billionaires afford to pay 52%? Of course they could–they own the majority all financial assets and skim the majority of all income. But they won’t, because the system is rigged to benefit the few at the expense of the many via legalized looting.

It isn’t just the inequality of ownership of capital and power that enrages the oppressed; it’s the blatant unfairness of our neofeudal / neocolonial system. As I explained in Neofeudalism and the Neocolonial-Financialization Model (May 24, 2012) and Welcome to Neocolonialism, Exploited Peasants! (October 21, 2016), the Financial Nobility have “come home” and applied the same rapacious exploitation they perfected in colonialism to the domestic populace.

Here’s looking at you, Federal Reserve–thanks for perfecting legalized looting and neofeudalism in America.

The gulf between the lavishly praised American ideals and the putrid, corrupt reality of America’s neofeudal system is wider than the Grand Canyon. As the pendulum accelerates to an extreme equal but opposite to the current extremes of unfairness, exploitation and legalized looting, those who have suffered the consequences of this systemic inequality will find expression in whatever ways are available.

Since it’s difficult to get to the protected compounds of the super-wealthy, the signifiers of the merely wealthy will offer readily available targets. The new Tesla won’t just get keyed; it will be “reworked,” to the great satisfaction of the “workers.”

Please note that I am not promoting a war on wealth and the wealthy, I am merely pointing out that it is as inevitable as the gravity pulling the pendulum.

The war on wealth and the wealthy will manifest politically, socially and economically. It won’t be a tightly controlled, top-down movement. It will be spontaneous, self-organizing and unquenchable.

If you don’t understand why a war on wealth and the wealthy is inevitable, please study this chart: the way of the Tao is reversal. 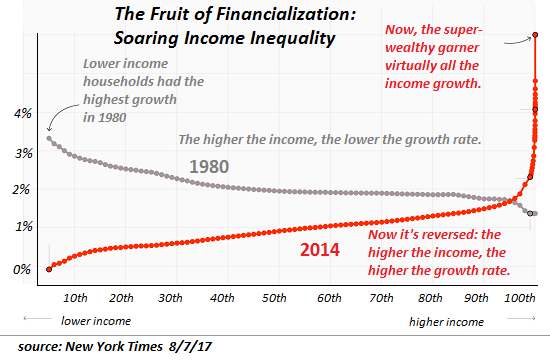