The Death of Andre Vltchek, A Passionate Warrior for Truth

Posted on September 28, 2020 by Luther Blissett 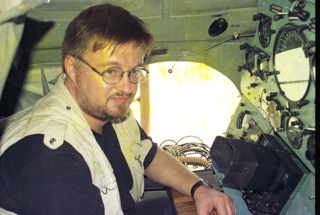 Source: Behind the Curtin

“If the world is upside down the way it is now, wouldn’t we have to turn it over to get it to stand up straight?” – Eduardo Galeano, Upside Down, 1998

For decades, Andre Vltchek, an old-school journalist and artist (but a young man) who traveled the world in search of truth and who always stood up straight, tried to revolve the world and encourage people to revolt against injustice. In this age of arm-chair reporters, he stood out for his boldness and indefatigable courage. He told it straight. This irritated certain people and some pseudo-left publications, who sensed in him a no bullshit fierceness and nose for hypocrisy that frightened them, so they stopped publishing his writing. He went where so many others  feared to tread, and he talked to people in places that were often the victims of Western imperialistic violence. He defended the defenseless and encouraged their defense.

Now he is dead.  He died in the back seat of a chauffeur driven rental car on an overnight drive to Istanbul, Turkey. He was sleeping, and when his wife attempted to wake him upon arrival at their hotel, she couldn’t.  He was 57-years-old.

Let him sleep in peace, but let his words ring out, his passionate cries for justice and peace in a world of violent predators.

Those who knew him and his work feel a great, great loss. His friend and colleague Peter Koenig wrote this touching goodbye.

As Koenig says, Vltchek was always defending those around the world who are considered disposable non-people, the Others, the non- whites, victims of Western wars, both military and economic, in places such as West Papua, Iraq, Syria, Africa, etc. He had a chip on his shoulder, a well justified chip, against the one-sided Western media and its elites that were always lecturing the rest of the world about their realities.

He was recently in the United States, and here is what he wrote:

But notice one thing: it is them, telling us, again, telling the world what it is and what it is not! You would never hear such statements in Africa, the Middle East, or Asia. There, people know perfectly well what it really is all about, whether it is about race or not!

I have just spent two weeks in the United States, analyzing the profound crises of U.S. society. I visited Washington, D.C., Minneapolis, New York, and Boston. I spoke to many people in all those places. What I witnessed was confusion and total ignorance about the rest of the world. The United States, a country which has been brutalizing our Planet for decades, is absolutely unable to see itself in the context of the entire world. People, including those from the media, are outrageously ignorant and provincial.

And they are selfish.

I asked many times: “Do black lives matter all over the world? Do they matter in the Democratic Republic of Congo, and do they matter in West Papua?” I swear, I received no coherent answer.

A few years ago, I was invited to Southern California to show my documentary work from Africa (my feature documentary film Rwanda Gambit, about West-triggered genocides in both Rwanda and later in the Democratic Republic of Congo), where millions of black people are dying, in order for the vast majority of the U.S. whites to live in piggish opulence.

But before I was allowed to present, I was warned: ‘Remember, people here are sensitive. Do not show too much of brutal reality, as it could disturb them.’

Hearing that, I almost left the event. Only my respect for the organizer made me stay.

But as everyone knows, it is nearly impossible to force people to open their eyes and ears when they are dead set against doing so.  Andre tried so hard to do that, and his frustration grew apace with those efforts that seemed to fall on deaf ears.

He was a relentless fighter, but he was a lover, too.  His love for the people and cultures of the world was profound.  Like Albert Camus, he tried to serve both beauty and suffering, the noblest of vocations. A lover of literature and culture, the best art and beauty ever produced, he was appalled at the way so many in the West had fallen into the pit of ignorance, illiteracy, and the grip of propaganda so tight that “what is missing is life. Euphoria, warmth, poetry and yes – love – are all in extremely short supply there.”

He sensed, and said it, that nihilism rules in the United States beneath the compulsive consumerism and the denial of the violence that the U.S. inflicts on people across the world. It was selfishness run amok. Me me me. It was, he felt, soul death, the opposite of all the ostensible religiousness that is a cover story for despair. He wrote:

It has to be stopped. I say it because I do love this life, the life, which still exists outside the Western realm; I’m intoxicated with it, obsessed with it. I live it to the fullest, with great delight, enjoying every moment of it.

Poetry, music, great literature, these he loved as he fought on the barricades for peace.

I urge you to read his article, Love, Western Nihilism and Revolutionary Optimism.

He was a rare and courageous man.  Let us ring bells in his honor.

Here’s a Kenneth Rexroth poem for Andre, the fighter with the poet’s heart:

Tell me your thoughts

And what you are….

2 Responses to The Death of Andre Vltchek, A Passionate Warrior for Truth