Russian Assets and Realignment as the Dems Morph into Neocons 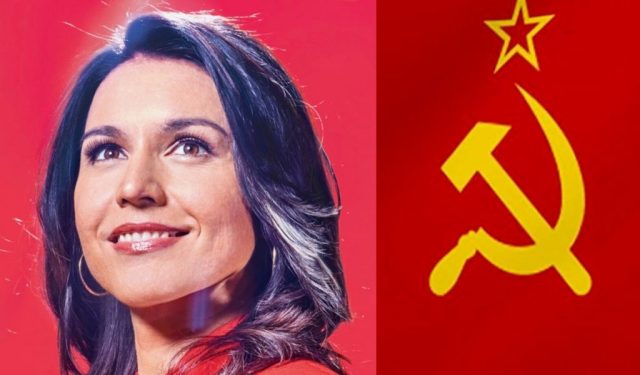 As you may have figured out by now, Hillary Clinton, warped by her own self aggrandizement of entitlement, did Tulsi Gabbard and her Presidential campaign against interventionist wars a huge incidental favor.

While the Democrats continue to splinter and spiral out of control on the eve of what promises to be a transformative national election, the Grand Inquisitor seized an opportunity to allege that Gabbard (and Jill Stein) are “Russian assets” and “Putin puppets”.

Since Tulsi is a Major in the US Army Reserves and holds the highest security clearance available, the term ‘asset,’ which is associated with being an agent of a foreign power, carries a level of national security significance.

Believing herself untouchable and immune from any genuine criticism or objective analysis after having successfully evaded prosecution from the nation’s top law enforcement agencies,  HRC went off the deep end dragging the Democratic party further into the ditch.

She is a favorite of the Russians.  That’s assuming that Jill Stein will give it up which she might not because she is also a Russian asset.”

Clinton’s historic pronouncement came in the mistaken belief that publicly humiliating Gabbard would intimidate the Aloha Girl to silence and seek refuge on her surfboard – but that is not how it has played out.

An unexpected bonus proved once again that political strategy has never been Clinton’s strong suit as her malicious comments have brought the anti-war alt left with the libertarian alt-right together in Gabbard’s defense.  With HRC’s injudicious taunts, the glimmer of an emerging political realignment, one that has been at odds with both the Dem and Republican establishments, has surfaced – probably not exactly what HRC intended.

In response to having received a burst of unprecedented support, Gabbard is about to assure her place on the November debate stage and continues to solidify her credibility as a critic of a corrupt bipartisan political establishment and its endless wars.

If they falsely portray me as a traitor, they can do it to anyone.  Don’t be afraid. Join me in speaking truth to power to take back the Democrat Party and country from the corrupt elite.”

It is noteworthy that HRCs accusation was to the only candidate who stands in direct opposition to the Queen Bee’s history for the war machine and all of its bells and whistles.  As if to call attention to the contradiction, the entire fiasco has acknowledged what was never meant to be acknowledged: that one little known Congresswoman from Hawaii would dare to publicly confront the omnipotent HRC with her own demons and malfeasance; thereby elevating the one candidacy that represents a threat to the military industrial complex and its globalist order.

It is no coincidence that the corporate media operates in lockstep as an offensive October 12th  NY Times article was immediately followed by a CNN commentary  as well as other media sycophants, all tagging Gabbard as a Russian asset.

Contrary to Journalism 101 on how professional media should conduct themselves, there has been no evidence, no facts, no supporting documentation as they characteristically rely on innuendo and disinformation.

At the last Dem debate and during the kerfuffle with Clinton, Tulsi has stepped up and showed herself to be a candidate the country has been waiting for.  With a powerful inner grit, she did not hesitate to take the Times and CNN publicly to task and then in response called HRC out as a warmonger and dared her to enter the 2020 fray.

There lies a deep truth within Gabbard’s response especially identifying Clinton as the “personification of the rot that has sickened the Democratic Party.”

During Clinton’s term as Secretary of State which is little more than a Glorified Global Hustler for the US military industrial complex, the Democratic Party lost its soul, morphing as nefarious neocons in pursuit of raw political and economic power that emanates from a policy of unfettered regime change and interventionist wars.

As Democrats embraced the neocons with no objection to the unrestrained violence, increased military budgets, indiscriminate selling of weapons to bomb a civilian population, then why should the party’s grassroots object to the Tuesday morning assassination list or drone attacks on civilians or creating war in four countries living in peace in 2008?

As the party faithful allow themselves to dismiss all the suffering, the death and destruction wrought by US-made weapons as if Amazon and Google toys were an acceptable trade, they lost their conscience and their connection to the basic essence of humanity’s need for peace, love and compassion.

The latest example of the Party’s devotion to war is their opposition to the withdrawal of US troops from Syria as they created the phony debate that the Kurds were worth more American blood or resources.  The Dems have always been more pro-war than they have been given credit for with WWI, WWII, the Korean War and Vietnam all initiated and/or expanded under Democrat Presidents.

With no substantiation from the mindless meanderings of a seriously disoriented woman, it is now clear that Clinton’s derangement syndrome of unresolved guilt and denial led the Democratic party to its irrational embrace of Russiagate as the justification for her 2016 loss.

In other words, it was Russiagate that protected HRC’s fragile self-esteem from the necessary introspection as Americans were pitted against one another, dividing the nation in a deliberate disruption of civil society in a more acrimonious manner than any time since the 1860’s.  The country has paid a bitter, unnecessary price for a divisive strategy due to Clinton’s refusal to personally accept responsibility for her own failings.

HRC’s most egregious war crimes as Secretary of State include assigning Victoria Nuland to conduct the overthrow of a democratically elected President in Ukraine in 2014 and the ensuing violence and civil war in the Donbass as well as her joyous rapture cackling at the death of Libyan President Qaddafi in 2011. The now infamous video “We came, we saw, he died” showed her to be more than just your average war criminal but a Monster who experiences an aberrant thrill at death and destruction.

Since June, TPTB have done their darnedest to deny Tulsi a spot on the debate stage rigging the qualifying requirements as best they could.  Making it near impossible for the polling firms, which rely on campaign season and their economic connection with the DNC to call the shots in a fair and equitable manner.

As the early primary states loom ahead, the last thing TPTB need is a powerful pro-peace voice resonating with the American public. The message seems clear:  talk of peace is verboten and equates with being a Russia asset and anyone with pacifist tendencies will be publicly chastised and condemned for being a tool of the Kremlin.

None of that has stopped Tulsi Gabbard.

Renee Parsons has been a member of the ACLU’s Florida State Board of Directors and president of the ACLU Treasure Coast Chapter. She has been an elected public official in Colorado, an environmental lobbyist with Friends of the Earth and staff member of the US House of Representatives in Washington DC. She can be found on Twitter @reneedove31