How Interlinked Corporations Rule The World 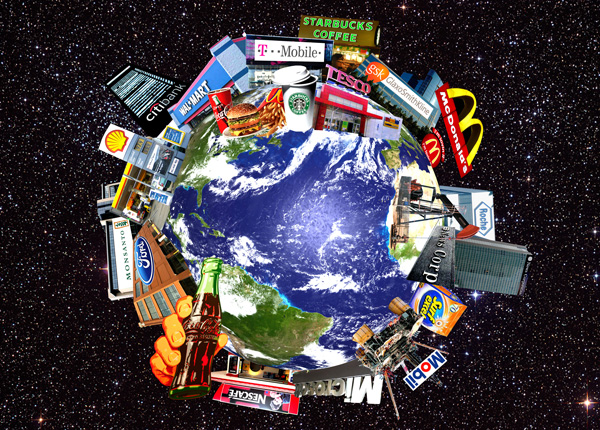 Globalism is just like the mafia, but with lot more complexity and respectability. If you have watched mob films such as The Godfather, you can understand how the world works. For example, in Godfather II, a bunch of mobsters get together in Havana, Cuba, to celebrate Hyman Roth’s birthday. As the birthday cake is symbolically cut into pieces and distributed, Roth tells the group how Cuba will be split up amongst the guests. Extrapolate this scene to the world, you can visualize how the world works.

The power structure of global elites is like nested Russian dolls made up of corporations. How many people realize that KFC, Taco Bell and Pizza Hut are owned by the same corporation? Or that HBO, CNN, TBS, TNT, Cartoon Network all report to the same boss? Or that whether you drink Budweiser, Corona, Stella, Busch or Michelob (and dozens of others), you end up paying one giant corporation?

Who controls these corporations? It’s not the CEO, as most people believe. The real control lies in the hands of the largest shareholders and/or the Board of Directors. The Board of Directors of all giant corporations are linked to each other by one or two degrees of separation. Some elites even sit on multiple boards at the same time. For example, Rochelle Lazarus sits on the boards of Merck, GE and Blackstone; Jon Huntsman sits on the boards of Hilton, Ford, Caterpillar and Chevron; and Timothy P. Flynn is a director at JP Morgan Chase, Wal-Mart, Alcoa and United Healthcare. Think for a moment how all these corporations would seem totally unrelated to a regular person.

Below is an image that show how the Boards at Netflix and Procter & Gamble are linked to some other popular corporations. (Note: this is a partial list of connections).

For these people, it doesn’t matter if you buy Pepsi or Coke; cars from GM or Ford or Toyota; or produce from Walmart or Safeway. It also doesn’t matter to them if you watch ABC or NBC or Fox. Your money goes to the same place.

There are also a few individuals like Carl Icahn or Paul Singer who can borrow billions of dollars at 0%, buy tons of shares of a corporation, change its policies (say, the dividends given out), and make a killing few months later. This is how the financial mafia’s shakedown works.

On the top of the food chain are the central banks who have the amazing ability to create money out of thin air. As Rothschild once said, “Give me control of a nation’s money supply, and I don’t care who makes the laws.” These people are the ultimate Godfathers of globalism. They determine the winners and the losers in capitalism, and thus control all the corporations (including the media), politicians, militaries, and the Deep States around the world.

How to use Corporations

All these corporations are but tools to be used for a higher purpose – controlling people. The financial system is the primary tool used to control nations. Any nation’s debt, wealth, credit rating, stock market, etc. can be manipulated by Wall Street, which is the financial weapon of mass destruction.

There are other corporations that wield power in less obvious ways. GMOs are effective weapons in controlling nations (if a country has to buy seeds and pesticides from foreign corporations every year, that country will stay submissive). Big Pharma and medicines also create dependencies in people and nations.

Above all, globalists strive for the ability to control what people think. This is where media, entertainment and the Internet come into play. Fortunately, all are corporatized, so that Facebook, Twitter, Google, mainstream media, and Hollywood can all work together to form the Ministry of Truth and control what people all over the world feel, think and believe.

The Internet is also a great tool to spy on people and leaders of nations all over the world. This comes in handy when uncooperative leaders have to be blackmailed or overthrown (example: anti-US Brazilian president, Rousseff, was removed by a leaked phone call. The NSA had spied on her and tapped her phone).

When Corporations Need Some Help…

Corporatocracy needs a lot of help in a “free market,” and that’s where military and politics come into play. Globalism demands that all the natural resources around the world be privatized, people of all nations be ready to work for the globalists, and all the economies be open for the corporations to sell their products. When nations resist this trend, they will suddenly face extraordinary problems. (Those who are familiar with John Perkins and his work as an “Economic Hit Man” understand this process.)

An ideal nation will be a vassal nation which will generously share and privatize its natural resources, provide cheap labor, open its markets to multi-national corporations, borrow excessive amounts from the World Bank and IMF, buy a lot of US treasury bonds, host US/NATO military bases, purchase US/EU weapons, and vote in the UN as instructed.

In the mafia movies, people who need to be persuaded may receive a dead fish wrapped in a newspaper or may wake up next to a horse’s head on their beds. In geopolitics, the warnings come in the form of color revolutions (Georgia, Ukraine), attacks by Islamic terrorists (Libya, Syria, Philippines), rise of separatist movements (Kurdistan, Balochistan), hostile attitudes from neighboring countries (Qatar, Iran), etc. If those don’t work, there will be sanctions (Venezuela) and eventually a shock and awe invasion. Unlike the mobster world who can simply carry out a helicopter attack(Godfather II), globalists put in a lot of efforts to justify their overt violence. This task of selling a war is carried out by press, pundits and politicians.

In my book, “Syria – War of Deception,” I explain the geopolitics of proxy wars, Islamic terrorism, and the struggle for global hegemony.

Politicians are also key stakeholders in globalism, and they sell to the public treaties such as NAFTA, WTO and TPP that give corporations power over individual nations. Secretary of State Hillary Clinton said in a speech (exposed by WikiLeaks) that the plan is to create a “hemispheric common market” that would be a union of North, Central and South Americas. There are also political unions that go beyond trade treaties – the creation of EU being an excellent example.

The Beginning of the end?

People who’re not caught up in the daily drama can see enormous problems with the current system. Globalists have used fake, fiat money to push the U.S. and most nations around the world into colossal debt. The entire global economy is sustained by artificial interest rates, real estate bubbles, stock market bubbles, and fictitious assets such as $500 trillion of derivatives (when the global GDP is only $75 trillion). We live in a real world that’s dependent on a Ponzi system fueled by virtual assets. While globalists keep assuring us how wonderful things are, the uber rich now have more wealth than ever before – just one-fifth of one percent of the world have a net worth of $63 trillion!

Most leaders of countries around the world have bought into this globalist system, either willingly or grudgingly. However, there are a few who are still resisting it to various degrees – North Korea does it belligerently; Syria, Iran, Venezuela and Russia do it defensively; and some such as China, Myanmar and the Philippines do it in more nuanced ways.

There’s also resistance to globalism from the left and the right of the political spectrum, albeit for different reasons.

The next twenty years may be the most significant in modern human history. Entire nations, societies and our way of life may change irrevocably. Will there be a challenge to the current world order either from sovereign nations or grassroots level organizations? Or will we say, “fuggedaboutit” and meekly go along, hoping for the best?

Chris Kanthan is the author of a new book, Syria – War of Deception. It’s available in a condensed as well as a longer version. Chris lives in the San Francisco Bay Area, has traveled to 35 countries, and writes about world affairs, politics, economy and health. His other book is Deconstructing Monsanto.

1 Response to How Interlinked Corporations Rule The World