Noseblind to Odors in Your Empire? 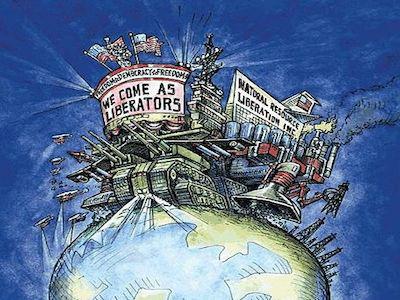 Using metaphor or analogy as a creative aid is especially useful when venturing journalistically into uncomfortable, foreign territory, and Trump’s new version of Amerika is indeed uncomfortable and foreign territory. Gotta admit to a serious case of writer’s block for the last couple weeks since The Donald’s coronation fiasco. Where to begin? All my go-to sources came up cold as January days in Jackson Hole…dried up like puddles after a Mohave Desert rainstorm. The Wizard of Oz, Alice in Wonderland, and The Matrix all seemed irrelevant.  George Carlin, Kurt Vonnegut, or Mark Twain quotes weren’t caustic enough to cut through the slime, nor offer adequate support for a conversation on the subject. But then the Heavens opened up and, through the miracles of Madison Avenue, there was a vehicle available to begin writing anew. A Febreze commercial on HGTV threw a left jab that hit me right between the eyes. Right there on my 46′ Magnavox, a kitchen island in a typical Amerikan home morphed into a back-alley dumpster, complete with roaches, flies, rats, alley cats, garbage, and stench. “Have you gone noseblind to the odors in your home?” the announcer asked. Perhaps, but more importantly, I’d guess that most Amerikans have gone noseblind to odors in their Empire.

And now Donald Trump’s in charge, and he leaves me longing for the pleasant sight of Obama’s smile, that soothing voice, and comforting demeanor. The familiar, believable, lovable, family man. A guy who never lost his cool. When Barack Obama stepped up to the microphone, the sweet, fresh scent of familiarity filled the air. Like the caustic but lively chemical fragrance of Febreze, Obama casually and effortlessly lulled Amerika into dumb insouciance. When Trump takes charge of the same microphone, the resulting clamor smells like a rat-infested dumpster. But then, beauty is in the olfactory receptors of the beholder. In truth, my nose is no more talented than those which decorate the faces of the sea of deplorables, sporting “Make America Great Again!” caps. We’ve all gone noseblind to the stench of Empire. If the truth be told, Amerika stinks under Trump’s watch, it stank during Obama’s eight year reign, it certainly reeked under the orchestration of Bush/Cheney, and the offensive smell lingers in the air just about as far back into the last 500 years of European occupation of The Western Hemisphere as you’d care to go.

Seriously, which odor is more offensive? Trump’s seemingly racist, xenophobic Muslim ban, or Obama’s record of bombing most of the same countries into oblivion? Trump’s signature on a document or Obama’s deadly drone assassination program? All seven Muslim-intensive countries on Trump’s justice-offensive Keep Out List have been subject to invasion or economic sanctions under Obama’s reign. Seems that Obama created the flow of refugees who fear for the lives of their children, and Trump has put out the No Trespassing sign, leaving a sea of desperate people with nowhere to go. The whole thing stinks, and has always stunk. Death and destruction never smell good.

The foul stench emanating from Trump’s Mexican Border Wall Plan is about enough to bring on a case of reverse peristalsis. Taking advantage of Mexico’s weakened condition following three centuries of Spanish occupation, the U.S.A. swooped in and confiscated the entire northern half of that country during The Mexican War. Since then, poor Mexicans have always come in our back door, doing the jobs U.S. Citizens find beneath their dignity, and doing so for slave wages. Obama threw the “illegals” a few bones during his tenure, but managed to deport a record-breaking 2 & 1/2 million of them while he was at it. Trump promises to lock the border and throw away the key. Smells like they’ve both been playing the same nasty game. The stench which filled the air while Obama sat on the throne has neither intensified nor diminished. If you haven’t noticed, you just might be noseblind to the odors of Empire.

We U.S. Citizens shoulder much of the blame for the stinking shenanigans of Empire. We believe the incessant lies of politicians over and over again. Fool us once, shame on you. Fool us 45 times, shame on us. We basked in the foul stench of Obama’s promises to end the wars in the Mideast, only to watch as he authorized the invasions of even more helpless, hapless populations. We cheered when he said he’d shut down Guantanamo. It’s a good thing we didn’t hold our breath. More recently, Trump seemed to be making peace with Russia, announced that the U.S.A. should stop attacking other countries, and seemed to be a good option over Hillary NevermetawarIdidntlike Clinton. In his next breath he beat the war drums, promised even more “defense” spending, and pointed a finger of blame and doom at China and Iran. While he was at it, he reaffirmed that along with maintaining a strong presence at Guantanamo, he’d reopen Black Sites abroad, and ramp up our lagging enhanced interrogation program. Ya gotta love torture. Only time will tell when or where our current loose cannon will fire his next stinking verbal barrage.

As a U.S. Citizen, I know a few things (almost) for sure about the Empire I call home. It is on the march, has been on the march since the penning of The Constitution, and will continue its foul, rancid march until somebody breaks both of its legs, and it can march no more. Empire devours everything in its path, then defecates broken countries and peoples into reeking mounds of destruction and death. The path of Empire’s march does not depend upon who holds its highest office and appears to be making all of the important decisions. While such apparent opposites as Obama and Trump appear to be at odds, they both play the game as they’re instructed. ‘Tis a grand illusion. Voting is an act of complete futility, and American Democracy is a lie. Our leaders are selected and assigned from above. As U.S. Citizens, we are no more than resources to be harvested, then cast aside as our utility diminishes and evaporates, our broken, decaying bodies becoming just another layer in the stench of death permeating the skies over the land of the free and home of the brave.

3 Responses to Noseblind to Odors in Your Empire?