Posted on January 3, 2015 by Luther Blissett 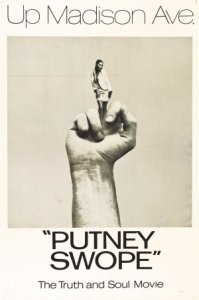 Putney Swope: Most under-rated cult film of the 1960s?

is an unusual film that splits audiences into two camps without breaking a sweat: those who absolutely love it and think it’s an unheralded masterpiece, and those who utterly loathe it (Check out Amazon reviews

!) A third and far larger category would be comprised of everyone who’s never even heard of this odd little gem in the first place. Back in the early 80s, when super rare cheap to license cult films would often appear on some schlocky video label long before some mainstream films became available Putney Swope

would often show up in the “Midnight Movies” or cult films section of video rental shops. After that it more or less disappeared until it came out on DVD. Every once in a while it’s on TV, too, but it’s still, sadly, Putney Swope is not a widely known film.

The Coen Brothers, Chris Rock, Dave Chapelle and Paul Thomas Anderson are all known to be big fans of the film. Jane Fonda declared it a masterpiece to Johnny Carson on The Tonight Show in 1969 and the Beastie Boys have sampled from it and rapped about it. Anderson even lifted a scene from it for Boogie Nights.

I thought it was an incredible masterpiece. I was stunned by it. I laughed out loud. I sobbed. It was amazing. It was profound and symbolic of everything! Then again, the first three times I saw the film I was ridiculously high on LSD and I watched it over and over again, by myself, three times in the same night!

When the acid wore off I still thought it was a great and profound film, perhaps just not as great. That didn’t stop me from being an evangelist for this weird little movie, which satirized race, how race was portrayed in advertising, race in the workplace, black militants, white privilege and corporate corruption (there’s even a hint of Orwell’s Animal Farm in it), to all of my friends. Man did I force this film on a lot of (grateful!) people. I’ve easily seen it 30 times.

The plot goes something like this: Arnold Johnson (who later played “Hutch” on Sanford and Son) is Putney Swope, a middled-aged black man who works at a Madison Avenue advertising agency with a bunch of corrupt corporate buffoons. When the founder of the agency dies mid-speech, the board holds a vote to find his successor while his body goes cold on the table. Everyone writes down a name on a piece of paper. They are informed that they cannot vote for themselves and so each man tears up his ballot. They cut deals with each other and then all vote for the one guy who they think no one else will vote for either, Putney Swope, the only black guy.

So Swope becomes the new CEO with a landslide. His motto is “Rockin’ the boat’s a drag. You gotta sink the boat!”  He promptly fires all of the white executives (save for one), renames the agency “Truth & Soul” and hires a young, idealistic and politically militant black staff who want to tell the actual truth in advertising. “Truth & Soul” refuse to take accounts from cigarette manufacturers, liquor companies or the war machine. They become so successful that the government becomes alarmed. Eventually everyone becomes corrupted, even Putney himself, who takes to dressing like Fidel Castro.

That’s about it, plot-wise, but a lot of stuff happens in Putney Swope

that would be difficult to try to describe here. The film is mainly in black and white, but the commercial parodies are in color. Antonio Fargas Jr. (“Huggy Bear” on Starsky & Hutch) has a memorable role as “The Arab,” Putney’s Muslim advisor and prankster Alan Abel is also seen in a cameo role. Putney Swope

is one of the great, great, great American counterculture films of the 1960s. One day. I predict confidently, it will be seen as the equal to Easy Rider or Five Easy Pieces. I’m surprised that French cinemaphiles haven’t discovered it yet… but they will. They will.

DVD on Amazon)  but DO watch the first scene up to the point where Putney takes over the advertising agency. If that doesn’t make you want to watch the rest, I can’t do much for you…