Posted on September 20, 2014 by Luther Blissett 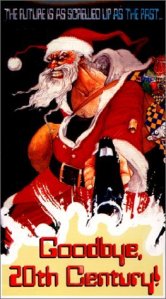 “Goodbye 20th Century” (1998) is a twisted but ambitious Macedonian film (directed by Darko Mitrevski and Aleksandar Popovski) connecting three allegorical tales from different eras. In the first segment, a man cursed with immortality in a post-apocalyptic world encounters a trickster who may hold the key to ending his existence. A shorter segment follows depicting the tragic first wedding captured on film in 190o. The film concludes in 1999 when a man in a Santa suit’s interruption of a military wake has violent consequences for all involved.

For English subtitles, click on the “cc” button near the bottom right corner of the video window.