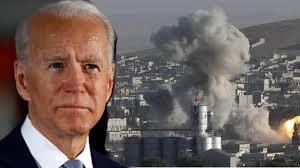 A permanent state of war on invented enemies is longstanding US policy.

It’s been this way throughout most of the post-WW II period.

Terror-bombing Syria last Thursday was one of many examples — escalating US aggression against the nation and people by Biden.

The Syrian Arab Republic threatens no one. President Assad is supported by most Syrians.

Yet Obama/Biden launched preemptive war on the country in March 2011.

The Pentagon and CIA use ISIS and likeminded jihadists as proxy forces to advance US imperial aims in Syria and elsewhere.

Washington under both right wings of its war party intends permanent occupation of the country.

Washington is “making the decision to never leave Syria, even to the point of destroying this country” — more than already he should have added.

Lavrov also stressed the US forces occupy “Syrian territory illegally, in violation of all norms of international law, including Security Council Resolutions on reconciliation in the Syrian Arab Republic.”

“They continue to play the separatism card.”

“They continue to block, using their levers of pressure on other states, any supply even of humanitarian aid, not to mention equipment and materials necessary to restoring the economy in the territories controlled by the government, and in every way possible force their allies to invest in territories outside Damascus’s control.”

“At the same time, they illegally exploit Syria’s hydrocarbon resources” by stealing them.

Longstanding US plans call for partitioning Syria and other regional countries for easier control.

The Jewish state’s “overarching goal is to weaken every Arab state by bringing religion and ethnicity into the equation.”

The plan for Syria is partitioning it into Kurdish, Alawite and Sunni states.

Balkanization of Middle East countries is also longstanding US policy.

Regional expert Mahdi Nazemroaya earlier explained that “(r)egime change and balkanization in Syria is very closely tied to the objective of dismantling the ‘resistance bloc’ formed by Iran, Syria, Hezbollah, the Palestinians, and various Iraqi groups opposed to the US and Israel.”

US/NATO/Israeli regional aggression aims to achieve this objective — what failed so far and won’t likely fare better ahead, but continues anyway.

In cahoots with Israeli interests, Obama/Biden launched preemptive war on Syria in 2011.

For hardliners in both countries, the road to Tehran runs through Damascus.

Control over the Syrian Arab Republic is seen as a way to weaken and isolate Iran and Lebanon’s Hezbollah.

According to Algerian academic Abdelkrim Dekhakhena, Bush/Cheney’s 2003 aggression against Iraq “metamorphosed into an apocalypse that swept the core nations of the region.”

“Chaos and destruction” followed with no end of it in prospect.

Washington’s notion of democracy building is suppressing its emergence everywhere and eliminating it wherever it exists.

US regional aggression is aided by ISIS and other terrorist groups — created by the CIA to advance Washington’s control over regional countries, their resources and populations.

According to Biden’s doublespeak through his press secretary Psaki — paid to lie for her boss — he OK’d escalated US aggression in Syria to “protect Americans (sic),” adding:

Endless US wars by hot and/or other means have nothing to do with democracy building, pursuing peace, or protecting Americans.

They have everything to do with advancing Washington’s diabolical imperial agenda that prioritizes unchallenged global dominance.

There’s nothing remotely legal about naked aggression in Syria or anywhere else.

A decade of US war against the Syrian Arab Republic and its long-suffering people perhaps will continue in perpetuity.

The same diabolical agenda continues in Afghanistan, Yemen, and Libya, along with war by other means against numerous invented US enemies — notably China, Russia and Iran.

Washington’s rage to dominate other countries by brute force defines what the scourge of imperialism is all about.

There’s no end of it in prospect.

Biden’s longstanding support for wars on invented enemies suggests further escalation of hostilities on his watch.

Confrontation by belligerence and other means will likely be prioritized over pursuing peace and cooperative relations with other countries.