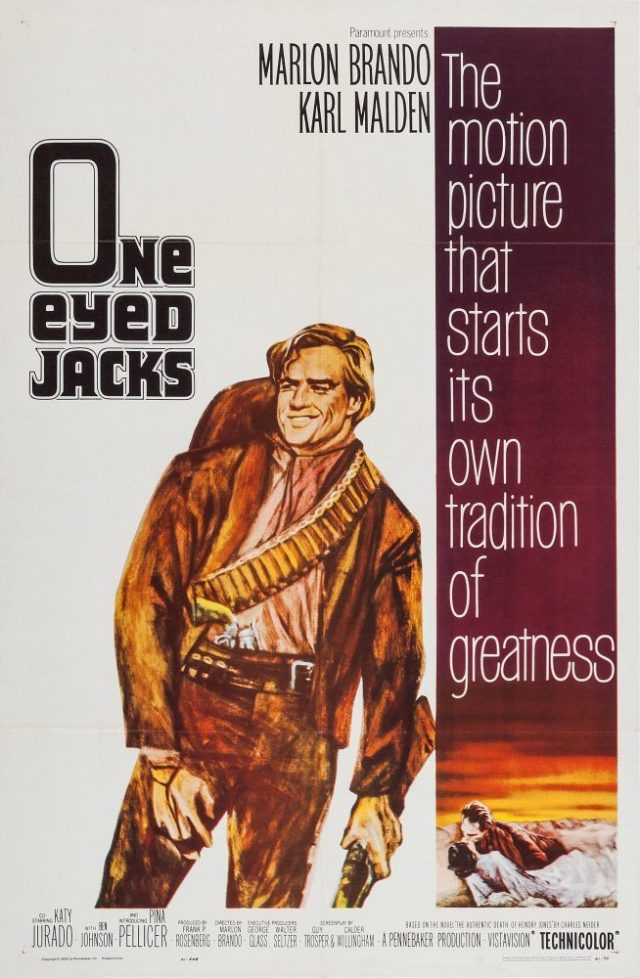 Marlon Brando’s ‘One-Eyed Jacks’: The Other Side of Your Face

“You may be a one-eyed jack around here, but I’ve seen the other side of your face.”

Marlon Brando’s One-Eyed Jacks (1961), the only film America’s greatest screen actor ever directed, was itself a one-eyed jack for many years. Seen as an example of excess and the dangers of handing a star with a big ego a big budget, we are now seeing the other side of its face. Thanks to the incredible restoration by Martin Scorsese’s The Film Foundation, the film has been saved and we can now see the true wonders hidden by One-Eyed Jacks‘ production issues and public domain status.

Brando stars as Rio “The Kid” and Karl Malden (Brando’s co-star in On The Waterfront and A Streetcar Named Desire) plays “Dad” Longworth. At the start of the film, Rio and Dad pull off a heist in a Mexico town. During the chase, they split up, with Rio left to fight the Mexican authorities himself and Dad going to get new horses. But instead of returning to help Rio, Dad decides to escape. Rio is caught and jailed.

Five years later, we suddenly see Rio escaping prison with his friend Chico (Larry Duran). He picks up Bob Amory (Ben Johnson) and Harvey Johnson (Sam Gilman) while on the trail to find Dad. That trail leads him to Monterey, California, where Dad is now the sheriff. What follows is nearly two hours of pure tension, watching the blood boil between the two as Dad and Rio move their chess pieces ever closer to a final duel that’s over in a flash. Each action the two men take – from Rio romancing Dad’s step-daughter Louisa (Pina Pellicer) to Dad framing Rio for a bank robbery and murder – is meant to move them closer to a crescendo.

One-Eyed Jacks is hardly perfect and one does wonder what a seasoned director like Stanley Kubrick (who was signed on to make the film at first) would have done with it. But it is doubtful anyone but an actor-as-director could have brought out vibrant performances as Brando did. We can see what the characters are thinking, something few movies can achieve without voiceovers. He has full faith in the audience to figure out what’s going on without dialogue, but he also doesn’t go for heavy-handed symbolism. Yes, there’s that beautiful shot of waves crashing behind Brando, but much of the film plays out in the characters’ minds when their words fail them.

It’s hard to see how Westerns after One-Eyed Jacks could exist without it, especially Sergio Leone’s films. If anyone was listening to Brando in 1960, One-Eyed Jacks would have announced the death knell of the Classic American Western long before Sam Peckinpah shot it to hell with The Wild Bunch. Although Peckinpah’s work on One-Eyed Jacks was likely completely gone by the time filming began, there still seems to be a bit of Peckinpah DNA left in the final result.

Based on the novel The Authentic Death of Hendry Jones by Charles Neider, the plot echos themes and plot points that later show up in the “revisionist” Westerns of the late 1960s and ’70s. We have two men scarred by a betrayal, a hero on the wrong side of the law and a corrupt official. Sadistic men roam this world, others are guilty until proven innocent and townspeople are mere casualties in their play.

There are truly few other movies like One-Eyed Jacks, a film that simultaneously breaks from Hollywood tradition while following it. The additions Paramount insisted Brando make don’t completely strip away his vision for a movie. It might not have been a success at the time, but the rebellion against the old system it declared certainly was.