Posted on December 5, 2020 by Luther Blissett 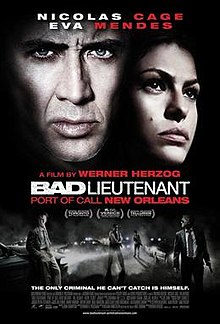 When is the audience allowed to laugh at a serious movie? How do you gauge whether the laughter expresses surprise, shock, nervousness, disdain, feigned superiority, genuine mirth, or some combination thereof? Take Werner Herzog’s films with his best fiend, Klaus Kinski: at a New York repertory screening of the deranged-conquistador saga Aguirre, Wrath of God a few years back, the patrons might as well have been watching The Hangover. Were they wrong? Or how about Abel Ferrara’s 1992 hell trip Bad Lieutenant: is it wildly inappropriate to laugh when Harvey Keitel’s depraved cop screams “You ratfucker!” at a church lady he mistakes for Jesus Christ? Is it wildly inappropriate not to laugh?

Herzog’s not-a-remake, Bad Lieutenant: Port of Call New Orleans, tacitly addresses this dilemma. Like much of the Herzog-Kinski catalogue, it’s a case study in bug-eyed monomania, and like Ferrara’s original, it’s a descent into the swamplands of the human soul with a drug-addled, quasi-righteous, borderline-insane cop as your tour guide. Unlike either, the reboot appears to be a comedy, or something close to it. BL:POCNO has comedy props: singing iguanas, a “magic crack pipe,” Val Kilmer. It has comic refrains that become funnier with each iteration, including Nicolas Cage’s emphysematic laugh and—for reasons that are tough to explain concisely—the letter “G.” It has punch lines. (“Everything I take is prescription. Except for the heroin.”) It has, for lack of a better term, a Gator Cam. Best of all, it has Cage, a walking sight gag who throws out his back early and spends the rest of the film bathed in a cold sweat of cocaine and Vicodin, lumbering around the post-Katrina landscape like he’s got a jumbo-sized T-square surgically jammed between his shoulder blades.

But BL:POCNO’s shaggy police procedural (the screenwriter is NYPD Blue and Law & Order alumnus William Finkelstein) is almost an afterthought, always secondary to the Passion of the Cage: stations include a pharmacy meltdown worthy of Julianne Moore in Magnolia, a scary-funny parking-lot shakedown of two club kids out on Daddy’s credit cards, and above all, a feat of witness intimidation involving an electric shaver and a nice old lady’s nasal cannula. Pawing absently at his face, sniffing at bags of evidence (usually pocketing them for later), and huffing crack with anyone who’s holding, McDonagh is a mass of primitive, unexamined desires. In the grip of both addiction and workaholism, he has an appetite but not a will, a brain but not a mind. He is, perhaps, reptile brain incarnate—hence those singing iguanas and surveillance-camera-eyed alligators, not to mention the lone little fish swimming sad circles in a glass in a dead boy’s room.

The Herzog version almost entirely eschews the religious iconography of BL 1.0, but McDonagh does occasionally experience the kind of ecstatic self-forgetting that saints and drug addicts have in common. The dopey bliss that washes over Cage’s face when he glimpses a break-dancing ghost or regales his starry-eyed girlfriend with childhood tales of “buried treasure” is the happiest gift this erratic actor has given us in a long time. Shot in New Orleans largely for the tax break, labeled Bad Lieutenant largely because the producers had rights to the brand name, and starring an actor who, not to put too fine a point on it, makes a lot of crap, Herzog’s movie has expedience and exploitation written all over it. But it’s too weird and unhinged and endearing—and, for all its sordid details, too ingenuous—to be anything but a labor of love.