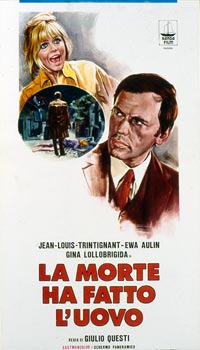 This is a deliriously strange thriller about a scientist (Jean-Louis Trintignant) who is breeding headless, boneless chickens at a high-tech farm. He’s having an affair with Ewa Aulin, who is plotting with him to kill his wife (Gina Lollobrigida)…and she’s plotting with Aulin to kill him…and he and Lollobrigida are plotting…oh, it’s too confusing, but extremely memorable. The bizarre, only semi-linear editing and trippy cinematographic techniques are artifacts of the psychedelic era and combine with the twisted story to make any Euro-cultist’s dreams come true. A film that defies easy categorization, it veers uneasily between giallo, drug film, and science-fiction, with heavy doses of romance and Antonioni-like weirdness. Some parts are even reminiscent of David Lynch‘s Eraserhead. Aulin was in the even stranger Microscopic Liquid Subway to Oblivion a few years later. A must-see for genre fans.

Watch the full film on Kanopy.