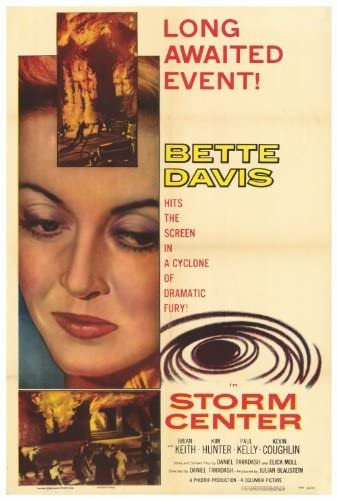 Storm Center is a 1956 American film noir drama directed by Daniel Taradash. The screenplay by Taradash and Elick Moll focuses on what were at the time two very controversial subjects – Communism and book banning – and took a strong stance against censorship. The film stars Bette Davis, and was the first overtly anti-McCarthyism film to be produced in Hollywood.

Alicia Hull is a widowed small town librarian dedicated to introducing children to the joy of reading. In exchange for fulfilling her request for a children’s wing, the city council asks her to withdraw the book The Communist Dream from the library’s collection. When she refuses to comply with their demand, she is fired, and branded as a subversive. Especially upset by this is young Freddie Slater, a boy with a deep love of books whom Alicia has closely mentored.

Judge Ellerbe feels Alicia has been treated unfairly, and calls a town meeting, hoping to rally support for her. However, ambitious attorney and aspiring politician Paul Duncan, who is dating assistant librarian Martha Lockeridge, undermines those efforts by publicly revealing Alicia’s past associations with organizations that turned out to be Communist fronts. Alicia notes that she resigned as soon as she found out the true nature of the organizations, but Duncan’s incendiary revelations result in only a handful of people showing up to the meeting. Those that do attend express concern about being branded Communists themselves if they stand with Alicia. Upon hearing their concerns, Alicia informs the meeting that she no longer wishes to fight the city council, and wants to let the matter drop. With no opposition to her removal mounted, virtually the entire town eventually turns against Alicia.

Freddie, convinced by the opinions of others, particularly his narrow-minded father, that Alicia is a bad person, is unable to handle the resulting feelings of betrayal. He becomes increasingly fearful even of books themselves, and he begins to break down completely, culminating in his setting fire to the library. His actions cause the residents to have a change of heart, and they ask Alicia to return and supervise the construction of a new building. Alicia agrees, lamenting her earlier decision not to fight and vowing never again to allow a book to be removed from the library.