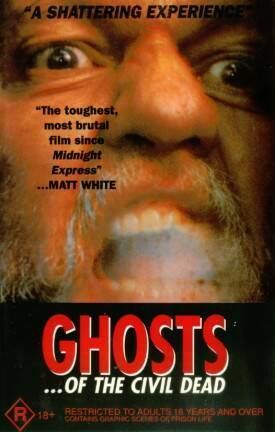 Director John Hillcoat (The Road, Lawless, The Proposition) made his 1989 feature debut with the gripping prison drama Ghosts…Of The Civil Dead, which contains a brief, but unforgettable appearance by Nick Cave. It’s a really amazing film, but one that is sadly little-known outside of Australia (and extreme Nick Cave fanboys—admittedly I saw Ghosts… almost alone, at its sole midnight screening in NYC.)

Perhaps it is a misconception, but due to the worldwide popularity of films like Chopper and the classic camp TV of the women-in-prison soap opera Prisoner: Cell Block H,  I can be forgiven, I hope, for assuming that Australians, on the whole, are a bit obsessed with criminals, violent crime and incarceration. I guess it’s in their blood, so to speak. (I kid, I kid, Aussie readers! Please don’t kill me!) Loosely based on the life and writing of Jack Henry Abbott—the psychotic murderer turned literary protégé of Norman Mailer turned psychotic murderer once again—and research done with David Hale, a former guard at an Illinois maximum security prison, Ghosts… Of The Civil Dead features a cast of real-life ex-convicts, former prison guards and tough-looking motherfuckers they found in local Melbourne gyms. This film is realistic. Scary realistic. HBO’s Oz is a day spa in comparison.

Narrated by a (fictional) former prison guard, Ghosts… takes place deep in within the bowels of a maximum security prison, somewhere in the Australian outback. The place is an incessantly humming, fluorescent-lit nightmare. Due to outbreaks of violence, there has been a three-year lockdown that is still ongoing. The tension is palpable, the place is a claustrophobic, concrete Hell that no sunlight penetrates, a hatred and resentment-fueled bomb with a very short fuse just waiting to go off.

As events transpire, the viewer begins to see that the prison authorities are actively trying to provoke the prison population, and that they are pitting the guards against the inmates, preying on both to escalate the violence in order to crack down on the prisoners ever harder and to justify building a fortress even more fearsome, inescapable and “secure.”

Ghosts… has layers of unexpected meaning. Although the script (co-written by Hillcoat, Cave, one-time Bad Seeds guitarist Hugo Race, Gene Conkie and producer Evan English) tells a reasonably straightforward tale of the prisoners—captive in a high security fortress that escape from seems impossible—versus the authorities who manipulate them into chaos, there’s a wider allegorical message of the power dynamic inherent in Western capitalism: Conform. Do exactly what we tell you to do, or there will be consequences. Like this high security Hell on Earth.

Michel Foucault would have most certainly approved of Ghosts…Of The Civil Dead, I should think.

Although contrary to the way Ghosts… was marketed, Nick Cave is onscreen for just a very short appearance about an hour into the film, but having said that, it is a cinematic moment of pure genius. Cave plays Maynard, a violent psychotic who paints with his own blood. Maynard is an absolute fucking lunatic, deliberately brought in by the prison authorities to make an already bad situation much, much worse. His psychotic ranting and raving riles up the situation into complete murderous chaos. Although he is seen just briefly in Ghosts…, it is Cave’s Maynard who lights the bomb’s ever present fuse.

Ghosts… Of The Civil Dead is extraordinary film, as as bleak and as uncompromising a work of art as I have ever experienced, it might be difficult for the squeamish to sit through. Once seen, it can never be forgotten.