The Corporate Debt Bubble Is A Train Wreck In Slow Motion 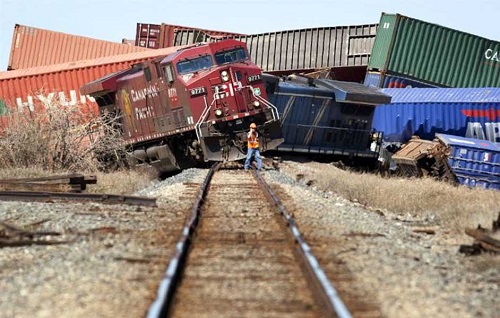 There are two subjects that the mainstream media seems specifically determined to avoid discussing these days when it comes to the economy – the first is the problem of falling global demand for goods and services; they absolutely refuse to acknowledge the fact that demand is going stagnant and will conjure all kinds of rationalizations to distract from the issue. The other subject is the debt bubble, the corporate debt bubble in particular.

These two factors alone guarantee a massive shock to the global economy and the US economy are built into the system, but I believe corporate debt is the key pillar of the false economy.  It has been utilized time and time again to keep the Everything Bubble from completely deflating, however, the fundamentals are starting to catch up to the fantasy.

For example, in terms of stock markets, which are now meaningless as an indicator of the health of the real economy, corporate stock buybacks have been the single most vital mechanism for inflation. Corporations buy their own stocks, often using cash borrowed from each other and from the Federal Reserve, in order to reduce the number of shares on the market and artificially boost the value of the remaining shares. This process is essentially legal manipulation of equities, and to be sure, it has been effective so far at keeping markets elevated.

The problem is that these same corporations are taking on more and more debt through interest payments in order to maintain the facade. Over the period of a decade, corporate debt has skyrocketed back to levels not seen since 2007, just before the credit crisis. The official corporate debt load now stands at over $10 trillion, and that’s not even counting derivatives exposure.  According to the Bank for International Settlements, the amount of derivatives still held by corporations stands at around $544 trillion in notional value (theoretical value), while the current market value is only around $10 trillion.  This is a massive discrepancy that can only lead to disaster.

In terms of debt-to-GDP, the credit cycle peak has spiked beyond any other peak in the past 40 years. This amount of borrowing always has consequences. Even if central banks were to intervene on a level similar to TARP, which saturated markets with $16 trillion in liquidity, the amount of cash needed is so immense and the economic returns so muted that such measures are ultimately a waste of time. The Federal Reserve fueled this bubble, and now there is no stopping it’s demise. Though, they’re behavior and minimal response to the problem suggests that they have no intention of stopping it anyway.

Currently, stock buybacks are set to decline this year, and I don’t think this is because corporations have decided they want to quit the tactic. They have to quit, because the amount of debt they are accumulating is is now outpacing their falling profits. Corporate profits peaked in the 3rd Quarter of 2018 and have been in decline ever since.  The Price-to-Earnings ratio as well as the Price-to-Sales ratio are now well above their historic peak during the dot-com bubble, meaning, stocks have never been more overvalued compared to the profits that corporations are actually bringing in.

As I warned back in 2018, Trump’s tax cuts were a gift to corporations, not average people, and that gift was designed to be squandered as there was no doubt that companies would pour all extra cash into stock buybacks instead of innovation and new jobs. This is exactly what happened.

While corporations, the Fed and Trump have been putting some effort into keeping stock markets from imploding, the real economy has been evaporating. Global import/exports are crashing, US manufacturing is in recession territory, US GDP is in decline (even according to rigged official numbers), US retail outlets are closing by the thousands, the poverty rate jumped in 30% of US counties in the past year, and high paying jobs are disappearing and being replaced with minimum wage service sector jobs.

To be sure, this process did not start under Trump, it’s been a slow motion train wreck for over a decade. But, it’s important to point out that Trump has done nothing to mitigate the crash and his obsession with the fraudulent stock market shows that he has no plans to try. The amount of time the tax cuts and debt increase bought was a couple of years. That’s it. With buybacks in decline, the question is what will keep the bubble afloat now? The Fed? That’s doubtful…

Global corporations with the most VISIBLE debt include:

Some companies, like Apple and Warren Buffet’s Berkshire Hathaway are holding extensive cash reserves, but most do not. Also, the level of cash reserves held by certain top corporations suggests they know something is on the horizon. Why hold piles of cash when the stock market is a “sure thing”? Unless, the debt bubble is about to collapse and cash will be needed to absorb the damage?

Stock buybacks, I believe, are the litmus test for how long the corporate world can hold out against the weight of the debt bubble. 2020 appears to be the year in which buybacks are set to crumble. Corporate profits degraded over 2019 and the slide is set to continue this year. This means profits are not going to come to the rescue and stave off the explosion of the debt structure (once again, the problems of demand and debt intertwine). All that is left is the Fed, as the “buyer of last resort” becomes the buyer of only import.

The list above, of course, does not include financial companies like JP Morgan and other banks that are suspected of harboring an extensive debt load and borrowing cash frantically through the Fed’s overnight repo markets.

These loans are now coming due, and the Fed has indicated it plans to tighten liquidity once again next month while returning to balance sheet cuts. Interest rates remain well above zero, which means the more companies borrow through repo markets, the more interest they will accrue. The Fed will have to institute a full QE program on the level of the TARP bailouts and cut interest rates to zero in order to end the constant repo liquidity threat and kick the can for a couple more years, and they’ve given no indication that they plan to do this in time to stop the current crash.

For now, Fed repo intervention has achieved little except keeping stocks at all-time highs. The rest of the economy is in disarray.

The real economy will start to drag down the establishment’s favorite distraction – The Dow, as this process continues. The big question is always one of timing. How long can the delusional euphoria keep the system levitated?

The situation is one of complacency and condition. If people are suddenly confronted with an enormous forest fire surrounding their city, they will ask “What can we do to save ourselves?” But what if people are surrounded by a forest fire for ten years and it hasn’t quite reached them yet? You warn them that the winds have finally changed and it is about to expand and take their homes and they will say “What forest fire?”

It’s hard to imagine a scenario in which there are no major shocks to the financial structure for the rest of the year. With the corporate system tapped out and no longer able to act as a support for the bubble, the fundamentals will start to take over again. Geopolitical events will also have a more visible effect. A whole year without escalation with Iran?  Without escalation with North Korea? Without a pandemic threat like the coronavirus going global? Without threats of a liquidity crisis as banks starve for more and more repo loans? I think not…

It’s important not to let complacency interfere with vigilance.  A slow motion train wreck is still ultimately a train wreck.  The damage can only be mitigated by removing one’s self from the train, and preparing for the fallout.  Do not think that simply because the system has been able to drag its nearly lifeless body along for ten years that this means all is well.  All bubbles collapse, and corporate debt has already sealed the fate of the Everything Bubble.