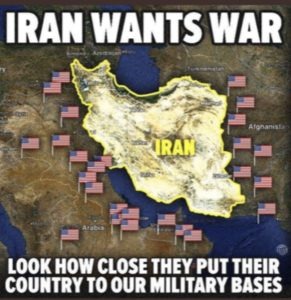 All I wanted to do this week was work on part 2 of my localism series, but circumstances quickly got the best of me. The assassination of Iran’s top general Qassem Soleimani was an event of such historical significance, I feel obligated to detail my thoughts on what it means and how things unfold from here, especially given how much of a role geopolitics and questions of empire have played in my writings.

First off, we need to understand the U.S. is now at war with Iran. It’s an undeclared, insane and unconstitutional war, but it is war nonetheless. There is no world in which one government intentionally assassinates the top general of another government and that not be warfare. You can argue the U.S. and Iran were already engaged in low-level proxy wars, and that’s a fair assessment, but you can’t say we aren’t currently in a far more serious a state of war. We are.

Soleimani was not only a powerful general, he was a popular figure within Iran. Unlike other blows the U.S. and Iran have inflicted upon one another, this cannot be walked back. There’s no deescalation from here, only escalation. Even if you want to pretend this didn’t happen and turn back the clock, it’s impossible. This is a major event of historical proportions and should be seen as such. Everything has been turned up a notch.

Before discussing what happens next and the big picture implications, it’s worth pointing out the incredible number of blatant lies and overall clownishness that emerged from U.S. officials in the assassination’s aftermath. It started with claims from Trump that Soleimani was plotting imminent attacks on Americans and was caught in the act. Mass media did its job and uncritically parroted this line, which was quickly exposed as a complete falsehood.

CNN anchor uncritically repeating government lies.
This is what mass media does to get wars going. https://t.co/QK1JET7TIj

It’s incredibly telling that CNN would swallow this fact-free claim with total credulity within weeks of discovering the extent of the lies told about Syrian chemical attacks and the Afghanistan war. Meanwhile, when a reporter asked a state department official for some clarification on what sorts of attacks were imminent, this is what transpired.

When asked by a reporter for details about what kinds of imminent attacks Soleimani was planning, the State Dept. responds with:

"Jesus, do we have to explain why we do these things?"

Naturally, we learned soon after from the Iraqi PM himself that Soleimani was in Iraq as part of a diplomatic effort to de-escalate tensions. In other words, he was apparently lured to Baghdad under false pretenses so he’d be a sitting duck for a U.S. strike. Never let the truth get in the way of a good story.

Iraqi Prime Minister AbdulMahdi accuses Trump of deceiving him in order to assassinate Suleimani. Trump, according to P.M. lied about wanting a diplomatic solution in order to get Suleimani on a plane to Baghdad in the open, where he was summarily executed. https://t.co/HKjyQqXNqP

As you’d expect, some of the most ridiculous propaganda came from Mike Pompeo, a man who genuinely loves deception and considers it his craft.. For example:

Pompeo on CNN says US has “every expectation” that people “in Iran will view the American action last night as giving them freedom.”

Then there’s what actually happened.

Absolutely massive crowds on the streets of Mashhad awaiting the arrival of Qassem Suleimani.

"We are ready for war." pic.twitter.com/ZK4O8KQB17

Iran's Supreme Leader Ayatollah Ali Khamenei and Qassem Soleimani's daughter Zeinab were among the hundreds of thousands mourning Soleimani in Tehran today. Iranian state TV put the crowd size at 'millions,' though that number could not be verified. https://t.co/R6EbKh6Gow

Moving on to the really big question: what does this assassination mean for the future role of the U.S. in the Middle East and American global hegemony generally? A few important things have already occurred. For starters, the Iraqi parliament passed a resolution calling for U.S. troops to leave. Even more important are the comments and actions of Muqtada al-Sadr.

Mahdi Army fought against the US troops during the invasion in 2003. Sadr disbanded the group in 2008.

Unmentioned in the above tweet, but extremely significant, is the fact al-Sadr has been a vocal critic of both the American and Iranian presence in Iraq. He doesn’t want either country meddling in the affairs of Iraqis, but the Soleimani assassination clearly pushed him to focus on the U.S. presence. This is a very big deal and ensures Iraq will be far more dangerous for U.S. troops than it already was.

Going forward, Iran’s response will be influenced to a great degree by what’s already transpired. There are three things worth noting. First, although many Trump supporters are cheering the assassination, Americans are certainly nowhere near united on this, with many including myself viewing it as a gigantic strategic blunder. Second, it ratcheted up anti-American sentiment in Iraq to a huge degree without Iran having to do anything, as highlighted above. Third, hardliners within Iran have been given an enormous gift. With one drone strike, the situation went from grumblings and protests on the ground to a scene where any sort of dissent in the air has been extinguished for the time being.

Exactly right, which is why Iran will go more hardline if anything and more united.
If China admitted to taking out Trump even Maddow wouldn’t cheer. https://t.co/zqaEDIoWH1

Iranian leadership will see these developments as important victories in their own right and will likely craft a response taking stock of this much improved position. This means a total focus on making the experience of American troops in the region untenable, which will be far easier to achieve now.

If that’s right, you can expect less shock and awe in the near-term, and more consolidation of the various parties that were on the fence but have since shifted to a more anti-American stance following Soleimani’s death. Iran will start with the easy pickings, which consists of consolidating its stronger position in Iraq and making dissidents feel shameful at home. That said, Iran will have to publicly respond with some sort of a counterattack, but that event will be carefully considered with Iran’s primary objective in mind — getting U.S. troops out of the region.

This means no attacks on U.S. or European soil, and no attacks targeting civilians either. Such a move would be as strategically counterproductive as Assad gassing Syrian cities after he was winning the war (which is why many of us doubted the narrative) since it would merely inflame American public opinion and give an excuse to attack Iran in Iran. There is no way Iranian leadership is that stupid, so any such attack must be treated with the utmost skepticism.

It’s impossible to know exactly what will happen in the short-term, but in the much bigger picture I have a strong view of what this means. The assassination of Soleimani kicks off the beginning of the final chapter in the decline of U.S. imperial dominance. It will likely play out over the course of the first part of this decade (2020-2025), and by the time it’s over it’ll be undeniable that the U.S. is no longer the global hegemon it once was. The world at that stage will be unmistakably multi-polar.

The signs are everywhere.

If you’re a Democrat you must become brain dead about Russia and blame everything bad on it.

If you’re a Republican you must become brain dead about Iran and blame everything bad on it.

Do empires fall because a superior military force beats them in a conventional war, or do they fall due to decades of debt, corruption and military entanglements on the periphery.

— Starfish Willing To Be A Replacement Prince (@IRHotTakes) January 5, 2020

This is not a time for despair, as there can be a huge silver lining to all of this. A singular focus on imperial hegemony has been terrible for most Americans. It has made us weak, it has destroyed the middle class, and it has entrenched a small subset of sociopaths into positions of total, unaccountable power.

The energy and spirit of the American people have been pushed aside and smothered so a bunch of defense contractors, politicians and finance criminals can play a game of RISK at the public’s expense. The transition is likely to be quite traumatic and fraught with danger, but empire has been a curse and has hollowed out the country. Shaking off empire at least gives us a shot at a revival.

1 Response to Another Stupid War