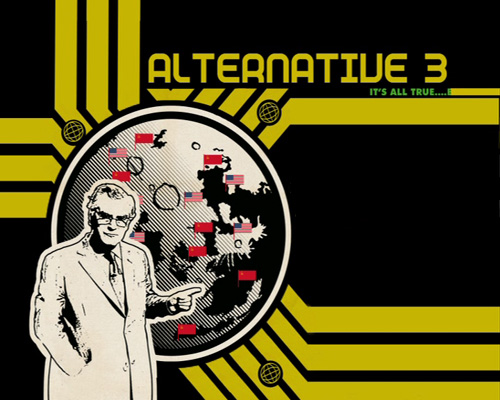 Alternative 3: The Hoax Behind The Conspiracy

“It makes no sense. I mean, how can people just vanish off the face of the Earth in this day and age?”

In 1977, a conspiracy was hatched involving writers, actors, politicians, scientists, and Brian Eno. The British television series Science Report was about to be cancelled, and its scheduled April 1 finale gave the creators an opportunity to prank those who believed everything they saw on television, and those so skeptical of everything as to see conspiracies all over the place. The resulting program, Alternative 3, is a classic in fake news programming; The War Of The Worlds by way of the BBC’s 1957 spaghetti harvest hoax.

Alternative 3 is presented as an investigation, with an aborted episode of Science Report as the frame. Twenty-four people interviewed for a Science Report episode on Britain’s “brain drain” have gone missing, including three profiled before the introduction.  Over the next hour, further pieces of the puzzle are put into place, connecting the disappearances to the death of a prestigious astronomer, the drunk ravings of a former astronaut, and the theories of an early proponent of the climate change hypothesis, Dr. Carl Gerstein. Contemporary news events, such as the Tangshan earthquake and United Kingdom heatwave and drought in 1976, and the North American mega-blizzard of early 1977, hint at a more destructive event than even the producers of The Day After Tomorrow could have imagined.

Gerstein finally unveils Alternative 3, one of a trio of ways for the human race to survive what he sees as an irreversible and cataclysmic return to the ice age. Compared to the “drastic reduction of the human population” (Alternative 1), and a plan to build underground bases to ride the catastrophe out (Alternative 2), Alternative 3 sounds just as good or bad. But since Alternative 3 is the name of the program, one can guess which is being implemented, and when it’s revealed, it’s a real doozy.

The program’s host, Tim Brinton, was a respected presenter and eventually became a Conservative MP, lending credibility to Alternative 3. Director Christopher Miles worked on feature films and television before and after the program’s release, and writer David Ambrose would go on to write screenplays for The Final Countdown and D.A.R.Y.L., among other films.

Labor issues delayed Alternative 3’s release until June 20, 1977, removing its April Fool’s context entirely — aside from a title card at the end placing the episode at it’s intended release date. The episode’s production values are very similar to British TV documentaries past and present, although it almost resembles self-parody at spots. The segues and dramatizations anticipate Look Around You by 25 years.

The otherworldly tone of the space sequences can be chalked up to Brian Eno’s score, later released under the track “Alternative 3” in his 1978 album Music For Films. Eno would return to lunar exploration later in his career. His 1983 album Apollo: Atmospheres and Soundtracks was later reworked as the soundtrack to the 1989 Apollo program documentary For All Mankind.

There are a few recognizable faces in Alternative 3, at least if you really know your stuff. Shane Rimmer, a self-proclaimed “rent-a-Yank” for British films and the voice of Scott Tracy on the classic TV show Thunderbirds played astronaut Bob Grodin. Richard Marner, who played Dr. Gerstein, became better known in the UK for the show ‘Allo ‘Allo, where he played an inept Nazi colonel. And Norman Chancer, who played science reporter Charles Welbourne, may be best known for his role as Moritz, the unorthodox psychologist in Local Hero.

To this day, many people think Alternative 3 to be disinformation. Viewers at the time believed the disinfo to come from the U.S, British, and Soviet governments, perhaps too busy calling Anglia TV with their outrage to see the cast listing in the credits. A novel based on the TV special also led credence to their worries. The prevaling line of thought these days is that the special was indeed a hoax, but based on factual information. Therefore, Alternative 3 was made to make a real Alternative 3 situation look like such a science fiction fantasy as to remove it from the public’s consciousness. Others still even believe that not only is Alternative 3 real, but is connected to our contact with extraterrestrials. But even a skeptic can love Alternative 3 as an entertaining hour of programming, and it also works as a great counterpoint to 1978’s Capricorn One, about a botched Mars landing being faked to prevent NASA from going under.

No matter what you take from Alternative 3, or what you believe about it, this film will stay with you, just like the sight Bob Grodin saw on the dark side of the moon.

The Truth About Alternative 3 (An archived newsletter excerpt featuring a letter from Leslie Watkins, author of the novelization of the screenplay available here: https://archive.org/details/Alternative3-33rdAnniversaryEdition )