Saturday Matinee: Embrace of the Serpent

Posted on December 7, 2019 by Luther Blissett 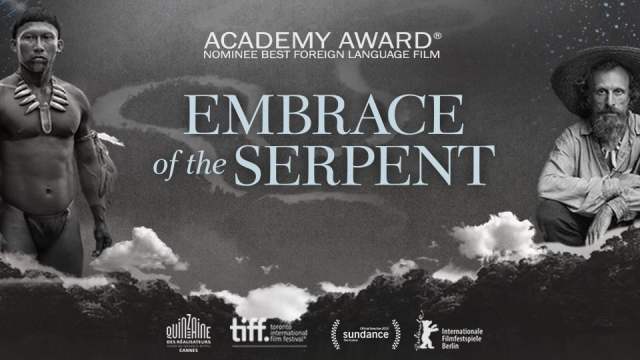 Embrace of the Serpent (Spanish: El abrazo de la serpiente) is a 2015 internationally co-produced adventure drama film directed by Ciro Guerra, and written by Guerra and Jacques Toulemonde Vidal. Shot almost entirely in black and white, the film follows two journeys made thirty years apart by the indigenous shaman Karamakate in the Colombian Amazonian jungle, one with Theo, a German ethnographer, and the other with Evan, an American botanist, both of whom are searching for the rare plant yakruna. It was inspired by the travel diaries of Theodor Koch-Grunberg and Richard Evans Schultes, and dedicated to lost Amazonian cultures.

Embrace of the Serpent was premiered on 15 May 2015 during the Directors’ Fortnight section at the 2015 Cannes Film Festival, where it won the Art Cinema Award. The film was released in Colombia on 21 May 2015, and worldwide over the course of the following twelve months. It has received universal acclaim from critics, who praised the cinematography and the story’s impact of the destruction of the Amazon rainforest and way of life by white colonialism. It has won numerous awards, including the Alfred P. Sloan Prize at the 2016 Sundance Film Festival, the Grand Jury Prize for Best Picture at the 2017 Riviera International Film Festival, and seven awards at the 3rd Platino Awards to recognise the best Ibero-American films of 2015, including the Platino Award for Best Ibero-American Film. In 2016 the film was submitted as Colombia’s entry for the category of Best Foreign Language Film at the 88th Academy Awards and was included among the final five nominees, becoming the first Colombian film ever to receive a nomination for an Academy Award.

The film tells two stories thirty years apart, both featuring Karamakate, an Amazonian shaman and last survivor of his tribe. He travels with two scientists, firstly with the German Theo von Martius in 1909 and then with an American named Evan in 1940, to look for the rare yakruna, a sacred plant.[4]

Theo, an ethnographer from Tübingen who has already been residing in the Amazon for several years, is very sick and is travelling by canoe with his field notes and a westernised local named Manduca who he saved from enslavement on a rubber plantation. Karamakate prolongs his life, blasting white powder called “the sun’s semen” (possibly a hallucinogenic made from virola[5]) up his nose, but is reluctant to become involved with a westerner and refuses his money. Theo is searching for yakruna as the only cure for his disease and the three set off in the canoe to search for it.

Many years later an American botanist, Evan (Brionne Davis), paddles up to a much older Karamakate (Antonio Bolívar) who has apparently forgotten the customs of his own people. Evan says he is hoping to complete Theo’s quest and Karamakate does assist, again reluctantly, saying his knowledge is spent. Evan has a book of Theo’s final trek, which his aide had sent back to Europe, as he did not survive the jungle. The book includes an image of Karamakate, which he refers to as his chullachaqui, a native term for hollow spirit. Karamakate agrees to help him only when Evan describes himself as someone who has devoted himself to plants, although Evan’s real purpose is actually to secure disease-free rubber trees, since the United States’s supplies of rubber from South East Asia had dwindled due to the Japanese wartime advance.

Both expeditions feature a Spanish Catholic Mission by the side of an Amazon tributary, run in 1909 by a sadistic, lone Spanish priest who beats orphan boys for any “pagan” behaviour, and in 1940 by a delusional Brazilian figure who believes he is the Messiah. He only trusts the visitors when he believes they are the Biblical Magi, but Karamakate wins his respect when he heals his wife. By now the children of 1909 have grown into disturbed and violent acolytes.

In 1909, we are left with Theo, sick and having fled the Mission, arriving at a frontier post just about to be invaded by Colombian soldiers during the Amazon rubber boom, where the sacred yakruna is being abused by drunken men, and cultivated, against local traditions. Karamakate is furious and destroys it. In 1940, Karamakate does show Evan the origin of the plant in striking denuded dome-shaped mountains (Cerros de Mavecure), allegedly the home of yakruna. He reveals one yakruna flower that is on the last plant – he has destroyed all the others – and prepares it for Evan. The preparation being hallucinogenic, aids Evan in undergoing a superconscious experience. While most of the film is in black-and-white, a part of this experience is shown in colour to signify its intensity. The film ends with a transformed Evan remaining enamoured by a group of butterflies.

Watch the full film on Kanopy.