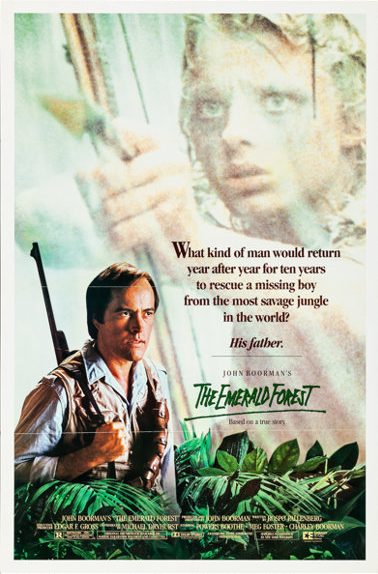 A drama about the clash between an Amazonian rainforest tribe with an ecological ethic and modern corporate interests who measure everything by progress.

“Rainforests are one of the most complex, beautiful and important of the many ecological systems on the planet,” naturalist Gerald Durrell has stated. “They are also ones that, primarily out of greed, we are destroying with the savage, unthinking ferocity of a troop of drunken apes in an art gallery. But whereas pictures can be repainted, tropical rainforests can’t be recreated.”

“When I was a boy,” says Wanadi, a primitive tribal chief who has kept his Invisible people out of contact with the twentieth century, “the edge of the world was very far. But every year it comes closer.” The Emerald Forest depicts the clash between this rainforest tribe, who adapt themselves to the environment and treat it like a friend, and inhabitants of the modern world, who measure everything by progress. Director John Boorman (Beyond Rangoon, Excalibur, Hope and Glory) shot this compelling film in Brazil in the rainforest of the Amazon.

The story begins with Bill Markham (Powers Boothe), an American engineer, taking his wife and two children to the site of a new hydroelectric dam he is building in Brazil. During the visit, seven-year-old Tommy wanders into the jungle and does not return. Ten years later, Markham is completing his work on the dam and still searching for his son. He finds him living with a Stone Age tribe who call themselves the Invisible People. They use a green dye to camouflage their presence in the Amazon rainforest. Although Markham wants Tommy to return with him to civilization, the youth — now called Tomme (Charley Boorman) — has become part of the tribe and views Wanadi (Rui Polonah), the shaman and chief elder of the Invisible People, as his true father. While staying with the tribe and seeing how his son has adapted to their way of life, Markham realizes that he cannot force Tomme to come home with him. He leaves alone. Shortly afterward, the Invisible People are attacked by a cannibal tribe, the Fierce People. These warriors kidnap the women, taking them to a shantytown which has grown up around the dam. They plan to sell them to brothel keepers. Tomme, now responsible for the Invisible People, realizes that he needs Markham’s technology to rescue the women since the Fierce People have acquired machine guns. His son’s return compels the engineer to take a hard look at the values which have motivated him to build the dam and the impact of his work on the Invisible People and their home in the rainforest.

In the spirit of Nicholas Roeg’s Walkabout, Peter Weir’s The Last Wave, and Werner Herzog’s Where the Green Ants Dream, the story conveys the ancient wisdom of the primitives who relish dream time and have found a way to dignify the different stages of life with meaningful rituals. Equally important is the message that an ecological ethic is far superior to the domineering ravaging of the earth that has come to characterize the “advance” of civilization.