Posted on September 5, 2018 by Luther Blissett 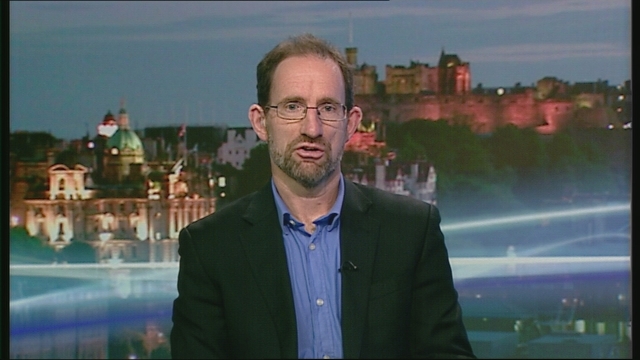 Facebook has deleted all of my posts from July 2017 to last week because I am, apparently, a Russian Bot. For a while I could not add any new posts either, but we recently found a way around that, at least for now. To those of you tempted to say “So what?”, I would point out that over two thirds of visitors to my website arrive via my posting of the articles to Facebook and Twitter. Social media outlets like this blog, which offer an alternative to MSM propaganda, are hugely at the mercy of these corporate gatekeepers.

Facebook’s plunge into censorship is completely open and admitted, as is the fact it is operated for Facebook by the Atlantic Council – the extreme neo-con group part funded by NATO and whose board includes serial war criminal Henry Kissinger, Former CIA Heads Michael Hayden and Michael Morrell, and George Bush’s chief of Homeland Security Michael Chertoff, among a whole list of horrors.

The staff are worse than the Board. Their lead expert on Russian bot detection is an obsessed nutter named Ben Nimmo, whose fragile grip on reality has been completely broken by his elevation to be the internet’s Witchfinder-General. Nimmo, grandly titled “Senior Fellow for Information Defense at the Atlantic Council’s Digital Forensic Research Lab”, is the go-to man for Establishment rubbishing of citizen journalists, and as with Joseph McCarthy or Matthew Clarke, one day society will sufficiently recover its balance for it to be generally acknowledged that this kind of witch-hunt nonsense was not just an aberration, but a manifestation of the evil it claimed to fight.

There is no Establishment cause Nimmo will not aid by labeling its opponents as Bots. This from the Herald newspaper two days ago, where Nimmo uncovers the secret web of Scottish Nationalist bots that dominate the internet, and had the temerity to question the stitch-up of Alex Salmond. 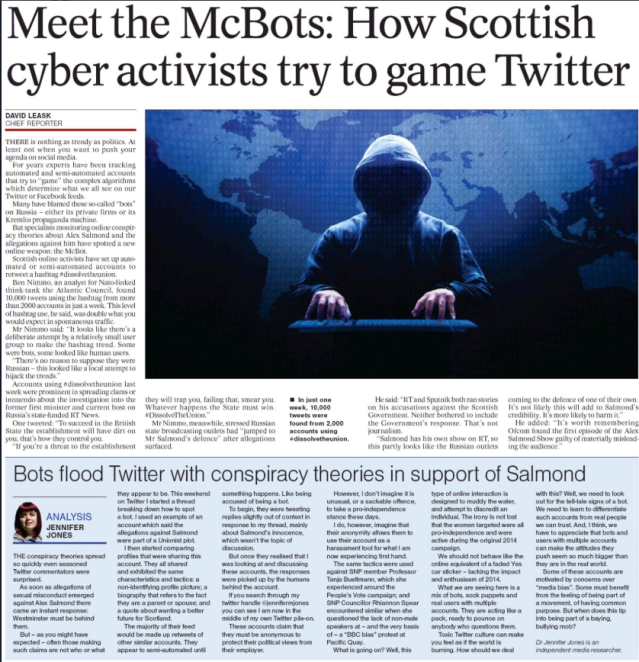 Nimmo’s proof? 2,000 people had used the hashtag #Dissolvetheunion on a total of 10,000 tweets in a week. That’s five tweets per person on average. In a week. Obviously a massive bot-plot, eh?

When Ben’s great expose for the Herald was met with widespread ridicule, he doubled down on it by producing his evidence – a list of the top ten bots he had uncovered in this research. Except that they are almost all, to my certain knowledge, not bots but people. But do not decry Ben’s fantastic forensic skills, for which NATO and the CIA fund the Atlantic Council. Ben’s number one suspect was definitely a bot. He had got the evil kingpin. He had seen through its identity despite its cunning disguise. That disguise included its name, IsthisAB0T, and its profile, where it called itself a bot for retweets on Independence. Thank goodness for Ben Nimmo, or nobody would ever have seen through that evil, presumably Kremlin-hatched, plan.

Nimmo’s track record is simply appalling. In this report for the Atlantic Council website, he falsely identified British pensioner @Ian56789 as a “Russian troll farm”, which led to Ian being named as such by the British government, and to perhaps the most surreal Sky News interview of all time. Perhaps still more remarkably, Nimmo searches for use of the phrase “cui bono?” in reference to the Skripal and fake Douma chemical weapons attacks. Nimmo characterises use of the phrase cui bono as evidence of pro-Assad and pro-Kremlin bots and trolls – he really does. Most people would think to consider cui bono indicates a smattering more commonsense than Nimmo himself displays.

It is at least obvious cui bono from Nimmo’s witchfinding – the capacious, NATO and CIA stuffed pockets of Ben Nimmo himself. That Facebook allows this utterly discredited neo-conservative charlatan the run of its censorship operations needs, given Facebook’s pivotal role in social media intercourse, to concern everybody. The freedom of the internet is under fundamental attack.