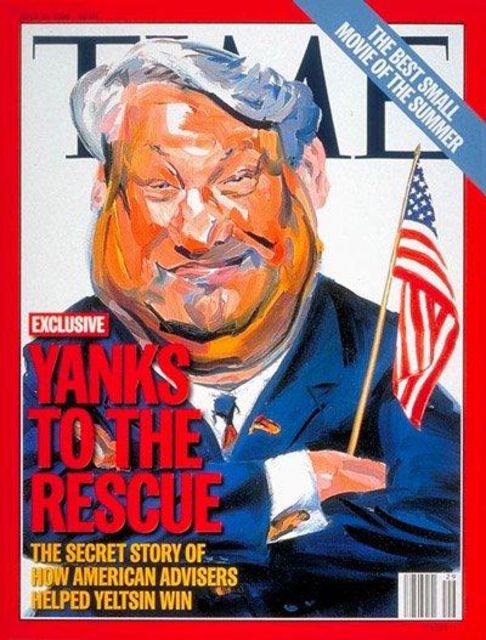 By Jim Naureckas and Janine Jackson

The media maelstrom around the Helsinki meeting between Donald Trump and Vladimir Putin obscures at least one point of view: that it’s possible to believe that Russia intervened in the 2016 election on behalf of Trump without thinking that this is remotely comparable to Pearl Harbor, as Politico (7/16/18) declared, or “the worst attack on America since 9/11,” as a Washington Postheadline (2/18/18) claimed earlier this year.

Not saying it doesn’t make it less true that both Russia and the United States frequently interfere in other countries’ elections—the US somewhat more frequently, according to a database of electoral interventions maintained by a political scientist at Carnegie Mellon. That’s a lot of Pearl Harbors.

In 1996, Time magazine published a cover story (7/15/96) headlined “Yanks to the Rescue: The Secret Story of How American Advisers Helped Yeltsin Win.” Russian President Boris Yeltsin, you may recall, embraced the idea pushed by Western advisors that what the Russian economy needed was “shock therapy,” a policy that resulted in the country losing about a third of its GDP. Yeltsin also created the model for the authoritarian post-Soviet Russia we have today, notably when he called out the military to shell the Russian parliament—just one of many examples that make clear that the difference between US and Russian electoral interference is not that “we” intervene on the side of democracy.

What justified concern there could be is undermined rather than served by airily ahistorical claims like that of a Washington Post op-ed by Garry Kasparov (7/17/18): “The Helsinki Summit Marks a New Low in the History of the US Presidency.” Suffice to say there are millions who disagree that Trump failing to acknowledge that he had Russian help in getting elected is worse than Bush Jr. invading Iraq, Reagan arming death squads in Central America, worse than Nixon bombing Cambodia, or Truman dropping atomic bombs on civilians, or FDR rounding up Japanese-Americans or, well,  worse than the deliberate separation of children from their families at the southern border. A conversation without that perspective is hardly worth having. Should we talk about electoral interference? Sure. But we don’t have to be led by media who are outraged at Moscow doing things that never bothered them when they were done by Washington—“It’s different cuz it’s us” is not really a moral principle—or whose concern about “foreign” interference in US elections is orders of magnitude greater than that around the interference represented by anti-black and anti-poor voter suppression, inaccessible polling places or partisan gerrymandering.