The Art of War: The Western American Empire in Crisis 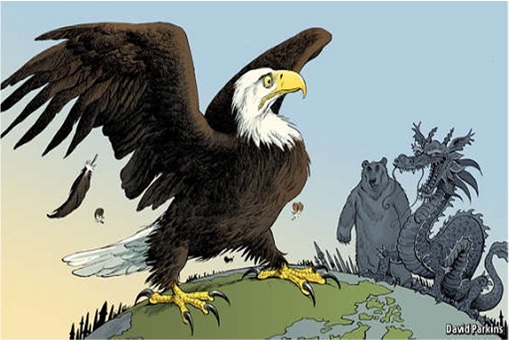 The US tariff war against China and the new sanctions against Russia are signs of a trend that goes beyond current events.

To understand what it is, we should go back about thirty years ago. In 1991 the United States, winners of the Cold War and of the first war after the Cold War, waged in the Gulf, declared that “the United States remains the only state with truly global strength, reach and influence in every dimension – political, economic and military” and that “there is no substitute for American leadership ” in the world.

By relying on the dollar hegemony, on the global reach of its multinationals and its financial groups, on the control of international organizations (IMF, World Bank, WTO), the United States promotes “free trade” and “Free movement of capital” on a global scale, reducing or eliminating tariffs and rules. The other Western powers move in their wake.

The Russian Federation, in a profound crisis after the disintegration of the USSR, is considered by Washington as an easy land of conquest, to be dismembered to better control its great resources.  China, open to the market economy, also appears to be conquerable with US capital and products and exploitable as a large reservoir of low-cost labor.

Thirty years later, the “American dream” of the unchallenged domination of the world has vanished.

Russia, by putting up an internal front to defend national sovereignty, has overcome the crisis and regained the status of great power.

China, “the world’s factory” where also US multinationals produce, has become the world’s leading exporter of goods and makes increasing foreign investments. Today it challenges the technological supremacy of the United States.

The project of a new Silk Road – a road, rail and maritime network between China and Europe through 60 countries – places China at the forefront of the process of globalization, while the United States is perched erecting economic barriers.

Washington looks with growing concern at the economic and political partnership between Russia and China, which challenges the hegemony of the dollar.

Failing to oppose this process only through economic instruments, the United States resorts to the military ones. The putsch in Ukraine and the subsequent nuclear escalation in Europe, the strategic shift to Asia, the wars in Afghanistan and Syria, are part of the strategy with which the US and the other Western powers try to maintain the unipolar dominance in a world that is becoming multipolar.

However, this strategy is suffering a series of setbacks. Russia and China, under increasing military pressure, reacted by strengthening their strategic cooperation.

Russia has not been got on the ropes but, in a surprise move, intervened militarily in support of the Syrian State which, in the US / NATO plans, should have ended up like the Libyan State. In Afghanistan, US and NATO are mired in a war that has been going on for over 17 years.

As a reaction to these failures, the propaganda campaign is intensified to make Russia appear as a dangerous enemy, also using the false flag of chemical attacks in England and Syria.

The same technique was used in 2003 when, to justify the war against Iraq, Secretary of State Colin Powell presented to the UN the “evidence” that Iraq possessed weapons of mass destruction. Powell, in 2016, had to admit the non-existence of such weapons. In 15 years, however, the war has caused over a million deaths.