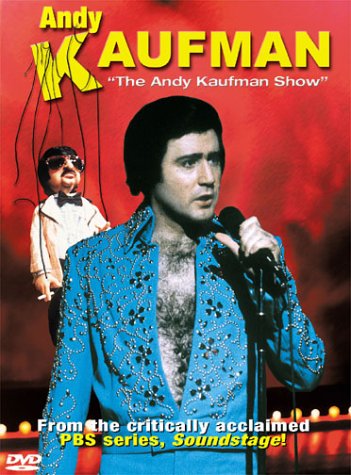 SAVE PBS! AFTER ALL, IT RAN ANDY KAUFMAN’S BRILLIANT, DEMENTED ‘TALK SHOW’ IN 1983

Holy moly! In 1983, just a year before his death of lung cancer—an event some people dispute ever happened—Andy Kaufman was given the bountiful gift of an hour of PBS programming time in the form of a segment of the music series Soundstage.

Kaufman used his hour to create a mind-boggling critique of talk shows and the entertainment complex writ large. The show is presented out of phase: we see the inexplicable final, hysterical moments of the program, perhaps holding out the promise that we’ll find out what the fuck was going on at the very end. Kaufman sings an inane farewell song and credits roll—then the program starts up again.

One of the first things Kaufman does is ask the home viewer to go get a piece of cellophane from the kitchen—and then sits on the lip of the audience bleachers and waits 30 seconds in ballsy silence while that task is accomplished. (Just in case there are any stragglers, he then briefly jacks the volume and shouts at the home viewers to hurry up.)

You don’t need me to tell you all the gags in advance, but boy, they are beautiful. What’s sometimes forgotten about Kaufman is that for all of his daring experimentation, he was almost always very funny. Nobody had better mastery over the mirth that could be extracted from an awkward turn of phrase or an uncomfortable pause.

In Lost in the Funhouse: The Life and Mind of Andy Kaufman, Bill Zehme writes:

They gave him an installment of the PBS concert series Soundstage, for which he was invited to fill an hour as he saw fit and, since this was public television and no serious money was involved, he saw fit to contrive the most elliptical and surreal refraction of existential realities that he had ever attempted. He spent the better part of June working at the WTTW production facilities in Chicago, where the series was produced and where he plotted strategem as he went along, with George and Lynne Margulies and Elayne Boosler as his sounding board. He would begin the show at the end and start again near the middle and utilize ideas learned as a child from watching Winky-Dink and You, wherein viewers were instructed to put cellophane on the television screen and draw on it to help him out of jams. He would have himself arrested and thrown into television court (all with cartoon backdrop) and defend whatever broadcast transgressions he had so far commited on the program. He would have an interviewing desk that was now seven feet high (calling no attention to this) from which he would imperiously interview Elayne, wherein they (candidly, no, really) traversed what had gone wrong with their relationship—“Sometimes I would wake in the morning,” he told her, “and I’d think I’d like to tell you that we’re gonna break up. I’d say, Well, I gotta tell her tonight—we’re gonna break up!” The Clifton puppet would meanwhile stalk the desktop and serve as sidekick.

If you have any yen at all for the outer reaches of experimental comedy, this is a must-see.

Oh—since it’s Kaufman we’re talking about here, don’t take anything for granted. Make sure you watch the program to the very end.