The Corporate Media’s Gulag of the Mind

Posted on December 8, 2016 by Luther Blissett

Your crime, as it were, need not be substantiated with evidence; the mere fact you publicly revealed your anti-Establishment thought convicted you.

One of the most remarkable ironies of The Washington Post’s recent evidence-free fabrication of purported “Russian propaganda” websites (including this site) is how closely it mimics the worst excesses of the USSR’s Stalinist era.

One episode is especially relevant to the totalitarian tactics of The Washington Post’s evidence-free accusation. Solzhenitsyn tells the story of one poor fellow who made the mistake of recounting a dream he’d had the previous night to his co-workers.

In his dream, Stalin had come to some harm. In Solzhenitsyn’s account, the fellow was remorseful about the dream.

Alas, mere remorse couldn’t possibly save him. He was promptly arrested for “anti-Soviet thoughts” and given a tenner in the Gulag–a tenner being a ten-year sentence in a Siberian labor camp.

The Washington Post’s accusation is based on a “behavioral analysis”–in other words, publicly sharing “anti-Soviet thoughts”–in our era, the equivalent is sharing anti-Establishment thoughts.

Your crime, as it were, need not be substantiated with evidence; the mere fact you publicly revealed your anti-Establishment thought convicted you.

This is the Corporate Media’s Gulag of the Mind. We’ll tell you what’s “true” and what is correct to think and believe. Any deviation from the party line is a threat and must be discredited, marginalized or suppressed.

Where is the Post’s hard evidence of Russian ties or Russian influence? There isn’t any–but like Stalin’s henchmen, the Post has no need for evidence: merely going public with an anti-Establishment thought “proves” one’s guilt in the kangaroo court of America’s corporate media (a.k.a. mainstream media or MSM).

While The Washington Post is owned by billionaire Amazon founder Jeff Bezos, the vast majority of what we read, watch and hear is controlled by a handful of corporations loaded with cash and connections to the ruling elite. 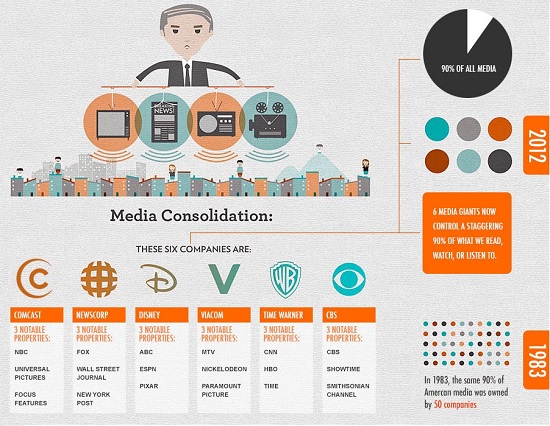 This concentration of media control creates the illusion of choice— the same elite-propaganda spin is everywhere you look; our “choice” of “approved” (i.e. corporate) media is roughly the same as that offered the Soviet citizenry in the old USSR.

The cornered elite-propaganda beast is lashing out, undermining its waning credibility with every attack on an independent free press. As I noted in a recent conversation with Max Keiser, democracy requires the citizenry to sort out who benefits from whatever narrative is being pushed.

That’s what terrifies the elite-propaganda mainstream media: the status quo narrative they’ve spewed for years doesn’t benefit the bottom 95%– rather, it actively impoverishes and disempowers the bottom 95%–and the citizenry is slowly awakening to this reality.

So for goodness sakes, if you have an anti-elitist dream, keep it to yourself or you’ll end up on the ruling elite’s “enemies list.”

The final irony in all this: the real enemy of democracy and freedom of the press is The Washington Post and the rest of the billionaire/corporate media. The only way to escape the Corporate Media’s Gulag of the Mind is to stop watching their TV channels, turn off their radio stations and stop reading their print/digital propaganda–except of course if you have a taste for dark humor.

3 Responses to The Corporate Media’s Gulag of the Mind