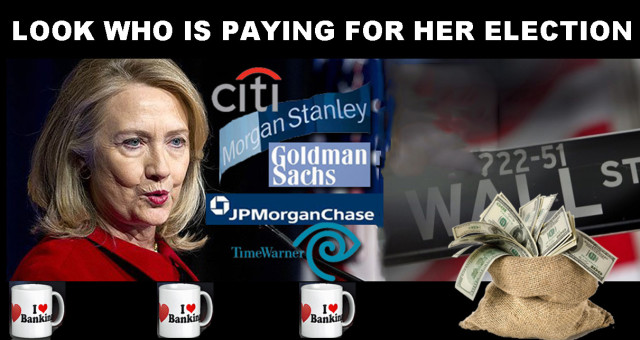 A new set of documents leaked by hacker Guccifer 2.0 allegedly shows the Democratic National Committee has no qualms about asking for donations from some of the most evil corporations in America — even the corporations whose values are directly in opposition to the Democratic Party’s stated goals.

The spreadsheet, which can be viewed in its entirety here, shows that DNC chair Debbie Wasserman Schultz and others within the DNC contacted several dozen corporate lobbyists to secure donations for the 2016 election cycle, soliciting four, five, and six-figure donations from their clients. The same spreadsheet shows the DNC asking for and receiving large sums of money from labor unions, environmental groups, and other advocates of progressive causes who may have likely given more thought to their donation had they known the DNC was asking their biggest opponents for money as well.

On a tab labeled “YesCommits,” meaning donors that said yes to the DNC’s requests for money, the Service Employees International Union (SEIU) committed to a $45,000 donation for 2016. Just four slots below, Walmart’s PAC for Responsible Government is shown having donated $15,000 to the Democratic Party in 2015.

Walmart has always been openly anti-union and is known nationwide for forcing employees into captive-audience meetings, in which anti-union propaganda videos are shown to new hires. Nonetheless, at the same time the DNC asked Walmart for money, it also asked for and received a $45,000 donation from the United Food and Commercial Workers union, one of the unions leading and sponsoring protests and strikes at Walmart stores nationwide for the corporation’s opposition to raising wages and displays of open hostility toward unions.

In the “Active” tab, under which active requests that are awaiting a reply are filed, the DNC is seen asking the National Restaurant Association PAC for $45,000, and asking for an undisclosed amount from McDonald’s.

This is particularly ironic, as the National Restaurant Association is one of the leading opponents of a national minimum wage hike, and the SEIU has been leading and funding the Fight for $15 minimum wage campaign since 2012, with McDonald’s as one of its key targets. The Democratic Party has had a $15/hour minimum wage in its official platform since August 2015, when party activists passed a nonbinding resolution, which became official last weekend when the minimum wage hike was approved by the Platform Drafting Committee.

The DNC also received $15,000 from Verizon and $105,000 from Comcast despite also asking the Communications Workers of America (CWA) for funding. The union is currently actively fighting companies like Verizon and Comcast for better wages and working conditions for its workers.

The spreadsheet also shows the DNC has no problem soliciting organizations that have actively fought the Democratic Party’s key legislative fights over the years. While the Affordable Care Act is widely seen as President Barack Obama’s chief legislative victory throughout his two terms in office, the DNC nonetheless asked for a donation from the American Medical Association, which was one of the earliest opponents of healthcare reform, dating all the way back to 2009. The DNC also asked for money from health insurance giants Anthem, Cigna, and UnitedHealth group, despite all three of those companies donating to Republicans campaigning on a promise to repeal Obamacare.

Another key legislative victory for the Obama administration was the passage of the Dodd-Frank Act, which was written with the aim of reining in abuse on Wall Street in the wake of the 2008 financial crisis. Some of the big banks and financial institutions that opposed Dodd-Frank also received fundraising asks from the DNC, including Wells Fargo, Citigroup, HSBC, Capital One, UBS, and Morgan Stanley. The DNC also asked Wall Street lobbyists for money in 2016, including the Securities Industry and Financial Markets Association (SIFMA) PAC and the American Bankers Association PAC. Bloomberg once referred to SIFMA as “Wall Street’s largest trade group.”

Other opponents of the Democratic Party’s agenda to regulate the prices of pharmaceutical drugs have been pursued by the DNC. Pharmaceutical kingpin Pfizer committed to a $15,000 donation for 2016 after being asked for a stunning $150,000, while Merck and Eli Lilly were both asked to donate. In January, Pfizer increased the prices of more than 100 different drugs, some by as much as 20 percent. Eli Lilly jacked up the price of its Humalog insulin by 20 percent, while Pfizer increased prices on the anticonvulsant Dilantin, angina drug Nitrostat, hormone therapy drug Menest, and irregular heartbeat medication Tykosyn by 20 percent each.

Merck, which makes the type 2 diabetes drug Januvia, increased the drug’s price by 20.8 percent in 2015. Merck CEO Kenneth Frazier, who is also the head of Big Pharma’s chief lobby, the Pharmaceutical Research and Manufacturers of America (PhRMA), defiantly defended the price increase in a Wall Street Journal interview in February.

“Merck has increased the prices of its drugs on a yearly basis, but we’ve tried to be constrained in how we’ve done it, in a way we think doesn’t prevent people from affording our drugs,” Frazier said.

Other donors the DNC solicited are notorious household names for much of the Democratic Party’s base. Weapons manufacturers BAE Systems, General Dynamics, Lockheed Martin, Northrop Grumman, and Raytheon were all targeted for donations in the 2016 cycle. Fossil fuel companies Duke Energy, Murray Energy, Peabody Energy, and Valero were also on the list. The DNC list also featured universally loathed companies like News Corp, parent company of Fox News, and Monsanto, which is reviled for monopolizing American agriculture with genetically modified food and mob-like legal tactics to subdue farmers into submission who save their seeds.

Pfizer lobbyist Julie Idelkope and News Corp lobbyist Joanne Dowdell, who are listed as points of contact on the DNC spreadsheet, did not immediately respond to interview requests. Walmart spokesman Greg Hitt responded to an email request asking what the money was for, to which he responded that they “[d]on’t have specifics on how the DNC will use the money, but it is intended to support the convention.”

Tom Cahill is a writer for US Uncut based in the Pacific Northwest. He specializes in coverage of political, economic, and environmental news. You can contact him via email at tom.v.cahill@gmail.com.