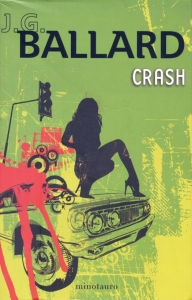 The Collins English Dictionary defines “Ballardian” as “resembling or suggestive of the conditions described in J. G. Ballard’s novels and stories, especially dystopian modernity, bleak man-made landscapes and the psychological effects of technological, social or environmental developments.” You’ll find no more distilled dose of the Ballardian than in Ballard’s book The Atrocity Exhibition, a 1969 experimental novel, or collection of fragments, or what’s been called a collection of “condensed novels.” Subject to an obscenity trial in the United States and the subsequent pulping of nearly a whole print run, the book has earned a permanent place in the canon of controversial literature. Its twelfth chapter, “Crash!”, even provided the seed for a Ballard novel to come: 1973’s Crash, a story of symphorophilia which David Cronenberg adapted into a film 23 years later. The movie, in its turn, stoked a furor in the United Kingdom, culminating in a Daily Mail campaign to ban it. But as far as filming material born of Ballard’s fascination with the intersection of auto wrecks and sexuality, Cronenberg didn’t get there first.

Susan Emerling and Zoe Beloff drew from Crash the novel to make the still-unreleased Nightmare Angel in 1986, but fifteen years before that, Harley Cokeliss turned “Crash!” the chapter into Crash! the short film (also known as The Atrocity Exhibition). Casting Ballard himself in the starring role and Gabrielle Drake (sister of singer-songwriter Nick Drake) opposite, Cokeliss crafts a vision almost oppressively of the seventies: the protagonist’s wide, striped shirt collar dominates his even wider jacket collar below the grim visage he wears while ensconsed in the suit of armor that is his hulking American vehicle. “I think the key image of the twentieth century is the man in the motor car,” Ballard says in voiceover. “Have we reached a point now in the seventies where we only make sense in terms of these huge technological systems? I think so myself, and that it is the vital job of the writer to try to analyze and understand the huge significance of this metallized dream.” If this Ballardian vision resonates with you, see also Simon Sellars’ thorough essay on the film at fan site Ballardian.