On the Drug War, and Other “Mistakes” 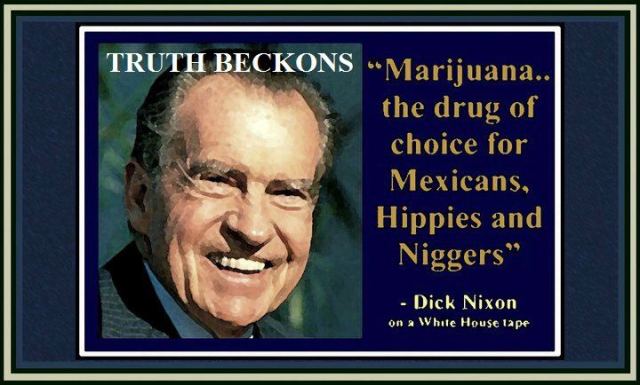 Source: Center for a Stateless Society

In a new article at Harper’s (“Legalize It All,” April 2016), Dan Baum recalls a 1994 confession by former Nixon domestic policy adviser John Ehrlichmann, about Nixon’s motives in first launching the War on Drugs. Baum, interviewing Ehrlichman for a book on drug prohibition, asked a “series of earnest, wonky questions, that he impatiently waved away”:

“The Nixon campaign in 1968, and the Nixon White House after that, had two enemies:  the antiwar Left, and black people…. We knew we couldn’t make it illegal to be either against the war or black. But by getting the public to associate the hippies with marijuana and blacks with heroin, and then criminalizing both heavily, we could disrupt those communities. We could arrest their leaders, raid their homes, break up their meetings, and vilify them night after night on the evening news. Did we know we were lying about the drugs? Of course we did.”

Judged by those objectives, Nixon’s War on Drugs and its subsequent dramatic escalation under Reagan have been resounding successes.

Many liberals, unfortunately, are prone to describing the War on Drugs as a “failure” — much as the Vietnam or Iraq War was “a mistake” — implicitly accepting the general goals of the American state as good and well-meaning, and merely unfortunate in their execution. The liberals who frame the wars in this way, as Noam Chomsky has argued, share the hawks’ view that “America owns the world” and has the right to define as a “threat” any country that defies its authority or attempts to undermine the global corporate order. And liberals and progressives are nauseatingly prone to referring to criminal foreign wars of aggression and domestic police wars on civil society as something “we” did.

But if you genuinely think the actions of the American state have anything to do with “we” or “us,” either you belong to the economic classes served by the state, or you probably still ask the dentist to save your extracted molars to put under your pillow.

Long before I saw Ehrlichman’s admission, I noted that the expanded War on Drugs against crack and meth under Reagan and Clinton had had a disruptive effect on two of the demographic groups (inner city black people and rural poor whites) that, as it happens, are least socialized to cheerfully accept direction from authority figures behind desks.

Going back to the passage of the Virginia Slave Code after the defeat of Bacon’s Rebellion, running through the use of racial divisions to split and defeat the southern tenant farmers’ unions, and right up to the present, the possibility of a strategic political alliance between poor black and white people has been one of the major fears of the propertied classes who control the American state.

So whether it be Nixon’s or Reagan’s War on Drugs, or the Clintons’ support for a Crime Bill (to “bring to heel” so-called black “super-predators”) that completed America’s growth into the largest carceral state in the world, the fact that a third of the urban black male population is in some phase of the “criminal justice” system and deprived of the franchise has had an enormous effect on radical political possibilities in this country. It has gone a long way towards nullifying the effects of the Voting Rights Act, in much the same way that Black Codes nullified the effects of Emancipation. Jeb Bush’s purge of 70,000 alleged “felons” — mostly not felons, but mostly black — from the Florida voting rolls was the main factor in handing the presidency to his brother.

I’m not, by the way, the kind of conspiracist who thinks every government policy fits into some larger, malign strategy that serves as the “real” motivation for all officials. I don’t doubt a great deal of legislation and executive action is intended as a good faith response to the stated concerns of policy-makers. Of course even such “well-meaning” policies are subject to the law of unintended consequences, mission creep, refusal to reassess in response to feedback on their effectiveness, and abusive or self-dealing execution by the bureaucracies tasked with enforcement.

The state does not represent “us,” and the destructive and genocidal effects of its policies are not “mistakes.”

5 Responses to On the Drug War, and Other “Mistakes”