Living in a PNAC World: The Toxic Legacy of 9/11

Posted on September 15, 2015 by Luther Blissett 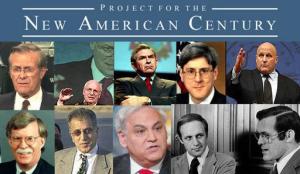 In September 2000, an advocacy group called “Project for New American Century,” led by Jeb Bush, Dick Cheney, Donald Rumsfeld, Paul Wolfowitz and others — published a “blueprint” for “transforming” America’s future. PNAC acknowledged that the “revolutionary” changes it envisaged could take decades to bring about — unless, they said, the United States was struck by “some catastrophic and catalyzing event – like a new Pearl Harbor.” One year later, after the disputed election of George W. Bush, came the “catalyzing” event of the 9/11 attacks — which indeed “transformed” America’s future in many “revolutionary” ways.

Here are some of the changes PNAC called for in 2000, all of which came about after the “new Pearl Harbor” they had hoped for: An attack on Iraq. Vast increases in military spending. Planting new American bases all over the world. Embracing the concept of “pre-emptive war” and unilateral action as cornerstones of national strategy. Developing sophisticated new technologies to “control the global commons of cyberspace” by closely monitoring communications and transactions on the Internet. Pursuing the development of “new methods of attack – electronic, ‘non-lethal, biological…in new dimensions, in space, cyberspace and perhaps the world of microbes.”

Oddly enough, although “regime change” in Iraq was clearly a priority for PNAC, it had little to do with Saddam Hussein and his brutal rule. Instead, removing Saddam was tied to the larger goal of establishing a permanent U.S. military presence in the Persian Gulf in order to “secure energy supplies” and preclude any other power from dominating the vital oil regions of the Middle East and Central Asia. The PNAC report puts it quite plainly:
“The United States has for decades sought to play a more permanent role in Gulf regional security. While the unresolved conflict with Iraq provides the immediate justification, the need for a substantial American force presence in the Gulf transcends the issue of the regime of Saddam Hussein.”

This is why the Bush Administration offered a constantly shifting menu of rationales for the impending attack on Iraq: because the decision to remove Saddam was taken long ago, as part of a larger strategic plan, and had little to do with any imminent threat from the broken-backed Iraqi regime, which at that time was constantly bombed, partially occupied (with U.S. forces already working in the autonomous Kurdish territories) and swarming with UN inspectors. If the strategic need for the attack “transcends the issue of the regime of Saddam Hussein,” then almost any rationale will do.

The same desire to “secure energy supplies” and prevent any other power from gaining dominance in the oil regions also underlies current and recent US policies in Libya, Syria, Yemen and elsewhere. That’s why we see the same shifting rationales, see policies that on the surface seem to make no sense: we fight al Qaeda in Iraq, we support al Qaeda in Yemen and Syria; we say defeating ISIS is of supreme global importance, but we prevent other countries (Iran, Russia) from joining the fight; we push “regime change” to “liberate” Libya and Syria while partnering with one of most repressive, extremists nations on earth, Saudi Arabia, and arming other dictators like Sisi in Egypt. We are “fighting” terrorism while turning whole nations (Iraq, Libya, Syria) into swamps of ruin and violence where terrorism can breed. None of these contradictory rationales make sense on the surface. But viewed as part of an ongoing, bipartisan agenda of securing American dominance of economically strategic lands — and of “discouraging advanced industrial nations from challenging our leadership or even aspiring to a larger regional or global role” (as an earlier Cheney-Wolfowitz document put it) — it becomes easier to see a pattern in today’s howling chaos.

This is not “conspiracy theory.” These motives and agendas are out in the open, and always have been. Our bipartisan leaders eagerly trumpet them, and declare that it is our right and our duty to dominate the world in this way. What’s more, any actions we take to accomplish this — wars, regime change, intrusive surveillance, drone campaigns, death squads, torture, killing thousands of innocent people (mere “collateral damage”), fomenting more hatred and extremism, breaking our own laws, turning our own people into fearful cowards ready to throw away their liberties to “stay safe,” etc. — are automatically just and righteous, because we are “exceptional.”

So yes, the “transformations” wrought in American policy — and the American psyche — since that “new Pearl Harbor” have indeed been “revolutionary.” Post-9/11, we are all living in a PNAC world.

Note: The above post was adapted (and updated) from a much more detailed piece originally written in 2002, which can be found here.

Nature has us all in an immutable checkmate...