US to rapidly expand war in Iraq and Syria

Posted on September 15, 2014 by Luther Blissett 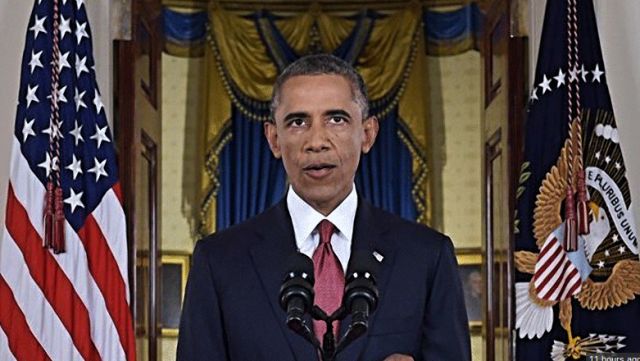 In the wake of President Obama’s speech Wednesday night, the US is preparing to rapidly ramp up its military operations in Syria and Iraq. Over the past month, the American military has carried out about 150 air strikes against Islamic State of Iraq and Syria (ISIS) militias inside Iraq. Now, Obama declared, the US will “go on offense,” extending the war in Iraq and into Syria.

While ISIS “terrorists” are the nominal target, the new US-led war in the Middle East is above all a revival of plans shelved a year ago for the toppling of Syrian President Bashar al-Assad.

Immediately after Obama’s address, a senior American defence official briefed the media on the Pentagon’s plans, declaring that it “is ready to conduct direct action against ISIL [ISIS] targets in Syria.” Of the nearly 500 additional US troops due to arrive in Iraq next week, more than half will be allocated to boosting joint operational command centres in Baghdad and the northern Kurdish city of Erbil, closer to the Syrian border. Another 125 military personnel are to go to Erbil to boost the number of drone strikes inside Iraq and Syria.

US Special Forces are already operating in Iraq and undoubtedly will be deployed inside Syria. A senior Air Force commander told USA Today that, while spy planes could identify targets in Iraq and Syria, it was “absolutely crucial that pilots are talking to an American on the ground.” He drew a parallel with the US invasion of Afghanistan in 2001 when US Special Forces and CIA operatives infiltrated into the country to guide US air strikes on Taliban targets and lay the ground work for the military occupation.

The Obama administration is pressing for Congress to authorise $500 million to train and equip anti-Assad militias, which is likely to proceed quickly with bipartisan support. At the same time, US Secretary of State John Kerry is touring the Middle East to enlist political and military support for anti-Assad forces inside Syria.

Twelve months ago, Obama called off a US air war against the Assad regime at the last minute amid widespread popular hostility, divisions in US ruling circles, lack of support from key allies such as Britain and opposition, particularly from Russia. Now the White House has seized on the spectre of ISIS—which the US and its allies in the Gulf States helped foster and fund—as the pretext for dusting off its plans for regime-change in Syria.

Saudi Arabia, which was bitter about the US decision to cancel the air strikes last year, is enthusiastically supporting the new war against ISIS, even though significant sections of the Saudi elite have been backing ISIS. The Saudi monarchy is well aware that the US has Assad firmly in its sights. Assad’s overthrow would greatly weaken the Saudi regime’s arch rival, Iran, by removing Iran’s ally in the Middle East.

The Saudi regime has offered facilities on its soil for the US to train and arm “moderate” anti-Assad militias and yesterday hosted a meeting between Kerry and Middle Eastern foreign ministers, including from the Gulf States, Turkey, Jordan, Egypt, Lebanon and Iraq. A joint communiqué between the US and 10 Arab states endorsed efforts to cut off funding to ISIS and block the flow of volunteers to ISIS.

The statement called for a coordinated military campaign, to which each country would contribute “as appropriate.” No specifics were spelled out, but a US State Department official traveling with Kerry told the media that “there’s going to be a meeting soon of defence ministers to work out the details,” including “enhanced basing and overflights” for US military forces.

Speaking after the meeting, Saudi Foreign Minister Saud al-Faisal enthused: “There is no limit to what the kingdom can provide.” Asked about previous criticism of Obama’s decision last year to call off air strikes on Syria, he played down past differences, declaring: “I don’t see disagreement. I see agreement about the present situation.” Any Saudi involvement in military operations inside Syria would dramatically heighten tensions with Iran and throughout the region.

The presence of the new Iraqi foreign minister is significant because Saudi Arabia branded the previous Baghdad government headed by Prime Minister Nouri al-Maliki as an Iranian puppet and cut diplomatic relations. Washington’s determination to oust Maliki to make way for “a more inclusive government,” formed this week, was aimed at drawing Iraq toward Saudi Arabia and other Arab states, and isolating Iran.

Kerry, who met with new government ministers in Baghdad on Wednesday, underlined how critical Maliki’s removal was to Washington’s war plans. “Now that the Iraqi parliament has approved a new cabinet with new leaders and representative from all Iraqi communities, it’s full speed ahead. A new, inclusive Iraqi government has to be the engine of our global strategy against ISIL.”

While repeating the line that the US would not deploy combat troops, Kerry left the door wide open by adding the rider, “unless, obviously, something very, very dramatic changes.” Dramatic changes are virtually inevitable as the US plunges recklessly into a military conflict in Iraq and Syria. If a sufficiently dramatic event does not emerge, it can always be provoked or manufactured.

The governments in Syria, Iran and Russia understand that they are the targets of this phony new “war on terror.” Syrian National Reconciliation Minister Ali Haidar declared yesterday that “any action of any type without the approval of the Syrian government is an attack against Syria.” Haidar insisted “there must be cooperation with Syria,” but Obama has emphatically ruled that out.

Russia’s foreign ministry warned that any US action, “in the absence of a UN Security Council decision, would be an act of aggression, a gross violation of international law.” Obama has indicated that, while he will seek a UN resolution, the US is prepared to act without it. Already confronted by the intervention of the US and its European partners in Ukraine, Russia now faces the prospect of losing its only ally in the Middle East and access to a Mediterranean port for its naval vessels.

Just as the 2003 invasion of Iraq was never about weapons of mass destruction, so the latest US military intervention in the Middle East has nothing to do with fighting terrorism, but is aimed at securing American domination throughout the region. A decade on, under conditions of greatly heightened geo-political tensions, this new expanded war of aggression threatens to embroil the entire region and trigger a far broader conflagration.