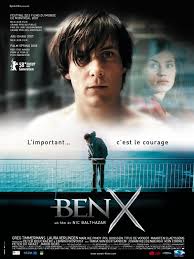 “Ben X” is a Dutch-Belgian drama directed by Nic Balthazar based on his novel “Nothing Was All He Said”. To escape the constant bullying at his school, Ben, a teenager with Asperger syndrome, immerses himself in the world of multiplayer rpg video games where he meets Scarlite, who gives him the inspiration and courage to stand up to the bullies. The film stands out for it’s realistic portrayal of autism, great acting all around, and a resolution much different from other films with a bullied protagonist (and unlike similar actual events that have made the headlines).