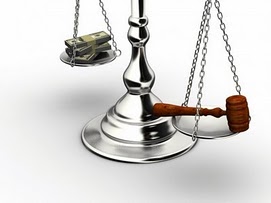 Some might argue they’ve been FUBAR for some time now. Most of the world knows that power corrupts and the rich (as well as the national security state which protects their interests) are above the law. By paying off the right law makers and law enforcers they figuratively and sometimes literally get away with murder. Now, thanks to two recent court rulings, the wealthy in the U.S. are free to lavish unlimited bribes on politicians and can get away with not just murder but child rape. These are the types of stories that corporate media shills don’t want you to know, but with the internet more people than ever are becoming aware (and justifiably outraged).

Judge ruled he “will not fare well” in prison

Weeks ago, we published a report about a member of the DuPont family with a prolonged history of sexually abusing children.  The man in question, 47-year-old Robert H. Richards IV, confessed to molesting both of his children and managed to avoid jail time because the judge said that he would not hold up well in prison.

At the time that we reported this story, it was ridiculed as “conspiracy theory” or “sensationalism”, by people who did not want to believe that this type of blatant systematic corruption exists.

However, now that the mainstream media has finally begun to pick this story up, it has gone viral and sparked outrage world wide.

Richards is a member of both the DuPont family, who built the worldwide chemical empire, and the Richards family, who co-founded the prestigious corporate law firm Richards Layton & Finger.

Richards was able avoid any jail time, thanks to his overpriced lawyers and the prestige of his families.  In 2008, Richards confessed to the fourth-degree rape of his daughter, and only received probation.  Then years later in 2010, he confessed to sexually abusing his son when he was just a toddler.  Now this information is finally coming to light as the result of a civil lawsuit that was recently filed by his ex-wife.

Kendall Marlowe, executive director of the National Association for Counsel for Children, told The News Journal that sex offenders are jailed for the safety of the children they threaten.

“Child protection laws are there to safeguard children, and adults who knowingly harm children should be punished,” she said. “Our prisons should be more rehabilitative environments, but the prison system’s inadequacies are not a justification for letting a child molester off the hook.”

It is actually shocking that the mainstream media has picked up this story at all.  There is a deep history of crime, corruption and pedophilia among aristocratic families.  Luckily, stories like this are actually beginning to get mainstream recognition, but it is unfortunate that most people out there won’t believe that a story is credible until it is seen in one of the state regulated, corporately owned news sources.

John Vibes is an investigative journalist, staff writer and editor for Intellihub News where this article originally appeared. He is also the author of an 65 chapter Book entitled “Alchemy of the Timeless Renaissance” and is an artist with an established record label.

Ignorance is Strength, Freedom is Slavery, Money is Speech

It was bad enough when the Supremes declared corporations were people in the infamous Citizens United decision. Now they have decided that money is free speech. In other words, money is to be given the same constitutional protection as free speech. The Washington Post explains it this way:

A split Supreme Court Wednesday struck down limits on the total amount of money an individual may spend on political candidates as a violation of free speech rights, a decision sure to increase the role of money in political campaigns.

The 5 to 4 decision sparked a sharp dissent from liberal justices, who said the decision reflects a wrong-headed hostility to campaign finance laws that the court’s conservatives showed in Citizens United v. FEC , which allowed corporate spending on elections.

“If Citizens United opened a door,” Justice Stephen G. Breyer said in reading his dissent from the bench, “today’s decision we fear will open a floodgate.”

So there it is, the final nail in the coffin to free and fair elections. Bye-bye campaign finance rules. “We the people” is now “we the wealthy.” The First Amendment protection of free speech was designed by the framers of our Constitution to protect our right to express our political opinions and exchange information and ideas without fear of governmental reprisal. By definition, it gives this right equally to every American citizen. Now the Roberts Court has decided, a la Orwell, that some people are more equal than others. If James Madison wanted to equate money with free speech, he would’ve drafted it into the Bill of Rights back in 1787. He must be flipping in his grave. His protection of all citizens has become a guarantee that the vast majority of us will no longer have any say in our electoral process.

This decision must make billionaires like Sheldon Adelson laugh so hard they spit gold coins out their noses. Now Adelson can select from a bevy of eager Neocons up on his auction block. And the brothers Koch can purchase any candidate they think will best do their bidding on Capitol (Capital?) Hill. And the 99% of the rest of us? Well, we will march lemming-like to the polls and pull the lever for whichever corporate candidate the 1% has purchased and placed on the ballot. Our elections will now be about as free and fair as those in N. Korea.

What was that Thomas Jefferson wrote in the Declaration of Independence? Something about what must happen whenever a government becomes destructive of our unalienable rights . . . .