Inner Alchemy: A Bridge Between Worlds 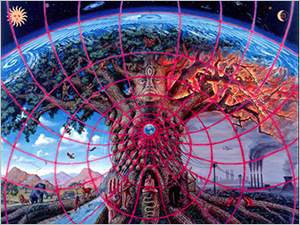 At Waking Times, Chris Bourne offers insights on the role of inner alchemy in the integration of an emerging “new world” and new paradigms to the reality of day-to-day life. He describes how the tactile, empathic, diplomatic aspect of the soul, by “intuiting and feeling the flow of ‘rightness’ in any given situation, yet molding and blending it into this material world”, can enable one to acknowledge and honor the subjective truth of others without compromising one’s integrity.

Inner alchemy, as Bourne defines it, is driven by spiritual awakening and resultant realization that our current world is out of balance with nature and out of synch with the natural flow of the universe. This leads to a compulsion to ‘be the change’ and involves “expressing your truth in every moment, not just with words, but in every physical, emotional and mental action that you take.” In other words, “Right Action”: action which is aligned with the universal flow. Among the indicators of “rightness” of one’s actions, he lists the following:

Bourne describes the process of realignment towards right action as not so much about making specific choices (though it can lead to right choices) but finding and expressing lost aspects of one’s true nature or soul. This is easier said than done because it often puts one at odds with “the matrix”, a powerful social construct which influences and manipulates everything within it through the establishment and enforcement of rules, norms and beliefs, control of resources and isolation from the natural flow of life.

The struggle to manifest truth (working in opposition to social and economic pressure from the matrix to prevent the success of such efforts) can be aided by what Bourne calls “soul ray harmonics”, or frequencies of consciousness. On one side of the spectrum are “catalysts”, which are harmonics to “shake things up”: to change, unravel, unwind and metamorphosize. On the other side are “empaths” which he defines as “souls who can absolutely and unconditionally accept life as it is without judging. They can witness and feel the truth at the core of all behaviour – no matter how distorted – and not need to change it. They are that energy that helps play out a distortion so that others ultimately want to change, all of their own accord.” Knowing where one is on the spectrum can help to clarify and become aware of the nature of one’s interactions and the impact they have on others (which is necessary for one’s personal evolution).

The specific type of harmonic that Bourne feels is most useful for our current situation is what he calls “Ray 4”: the inner diplomat which empathises and influences,  accepts unconditionally but also catalyses, also known as the ‘Bridge between Worlds’. To help become better attuned to this harmonic or frequency, he offers the following guidelines:

Bourne follows this with a reminder to question whether one’s actions are driven by the soul or ego and concludes with an inspiring message:

Whether we fully know it or not, we’re living in two worlds at the moment. The higher paradigm is to be found infusing this lower world, working to transform it. Those who are already carrying the light, will frequently find it challenging. The old world values are so used to living in the shadows and fear the light. There’s a clinging to the easy-to-understand, in-the-box expediency and soft comfort. There’s a strong dependence on the crutch of old behaviours.

Despite this, there comes a point where you simply cannot compromise your soul a moment longer. You realise the illusion and that the only real purpose of life is the expression of you. In mastering the Ray 4 Diplomat – an interwoven aspect of your soul – it means you can still be living and breathing the higher realm, whilst acting in this one. It means you can stay in the truth.

In so doing, not only does your awakened life become more manageable, you become a powerful facilitator.
You become a bridge between the worlds.

4 Responses to Inner Alchemy: A Bridge Between Worlds