Finally: the Eruption of the Clinton Foundation Scandal 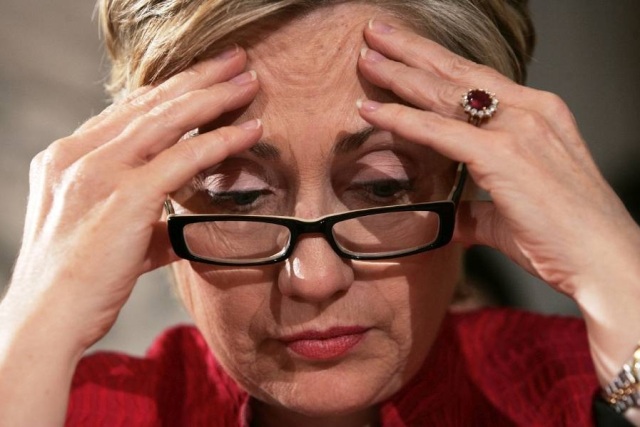 “It’s getting really hard to know where any lines were drawn.”

I confess I’d been looking forward to this. My son, following the Judicial Watch website, has been saying for months that the big email scandal will involve the State Department-Clinton Foundation ties and Hillary’s use of her office to acquire contributions from Saudi and other donors. As someone opposed to World War III (beginning in Syria and/or Ukraine), I was hoping that they (and he) were right.

It might not be all that immediately clear to many why this is another big deal. After all, it follows Hillary’s ongoing private server email scandal, involving not just issues of the Secretary’s “judgment” and so-called “national security” but also revealing details about Clinton’s key role in the bloody destruction of Libya and her hawkish views in all circumstances.

CNN commentators assure us that the FBI investigation “went nowhere” because the FBI decided she’d committed no crime. (Just move on, folks; this was political all along.)

These new revelations come just after the scandal of the DNC rigging the primaries for Hillary, revealed by email leaks (from an unknown source) provided through Wikileaks. The content of these has been avoided like the plague by mainstream media, which is in Hillary’s camp and is generally protecting her. The focus instead is on alleged Russian efforts to influence the U.S. election, and the imagined Putin-Trump “bromance.” Respectable news agencies have been announcing, as fact, the idea that Wikileaks got the emails from Russia; and that Moscow is trying to swing the election towards Trump (because he’ll accept an invasion of Estonia, wreck NATO etc.). It’s (or it should be) obvious bullshit, an effort to change the subject while exploiting the McCarthyite paranoid sentiments of the most backward.

What do the emails show so far? Two examples have been highlighted by the conservative Judicial Watch, which requested the email transcripts through the FOIA. In the first, in 2009, Gilbert Chagoury, a Lebanese-born billionaire who has given the foundation up to five million dollars and used its assistance to build a project in Nigeria, and is one of the foundation’s top donors, contacted Doug Band, head of the foundation’s Clinton Global Initiative, asking to be put in touch with a high ranking State Department official connected to Lebanon.

Band emailed Hillary’s top aide Huma Abedin and advisor Cheryl Mills, expressing a need. He writes: “We need Gilbert Chagoury to speak to the substance person re Lebanon. As you know, he’s a key guy there and to us and is loved in Lebanon. Very imp.”

A key guy to us. To the Clinton Foundation? The U.S.A.? Abedin did not ask that question before responding, “It’s jeff feltman. I’m sure he knows him. I’ll talk to jeff.” Feltman had been U.S. ambassador to Lebanon from July 2004 to January 2008 but was apparently still seen as the go-to guy. So Hillary’s chief aide took it upon herself to contact the former ambassador to tell him Chagoury (whom she might mention is a major contributor to the Clintons) needed to talk with him.

Nothing illegal there, they will say. Why shouldn’t the State Department arrange contact between a billionaire Lebanese Clinton donor, loved in Lebanon, and the ex-ambassador, if it contributes to regional stability or U.S. national security? And the hard-core Hillary supporters will nod their heads, and maybe point out that Feltman has denied any “meeting.” (Maybe Huma just passed on his address and they chatted online.)

(CNN I notice is showing a video of Bill Clinton with Chagoury in Nigeria, inaugurating a multi-billion dollar waterfront development on the coastline established “under the umbrella of the Clinton Global Initiative.”)

The other instance of “overlap” central to the discussion so far is a request of Band to Abedin and Mills for “a favor.” Someone who had recently been on a Clinton Foundation trip to Haiti wanted a State Department job. He indicated that it was “important to take care of” this person. Abedin, apparently without questioning Band about why this person was important, got right back to him: “We all have him on our radar. Personnel has been sending him options.” So the head of the Clinton Foundation could snap his fingers, again stressing how “important” his demand was, and Hillary aides Huma and Cheryl paid by your tax dollars would snap into action.

A CNN report deplores “the intermingling of emails between State and Clinton Foundation and others, giving the overall effect that it’s getting really hard to know where any lines were drawn.”

Maybe nothing illegal here. But there is an ongoing FBI investigation, no longer about Hillary’s multiple phones and private server, nor about the content of the communications (revealing her hawkish savagery), but about the routine trade-off of foundation connections for political rewards.

Those transactions are mere corruption, not war crimes. But the U.S. mass media never targets politicians for their bloodiness, and they love the conventional corruption scandal. So let there be more leaks that will absorb the attention of the talking heads! Let’s see clearer pay-for-play evidence! And let’s see more details about how the DNC midwifed Hillary’s nomination, actively sabotaging a supposedly democratic process.

Bernie in a fair process would be the Democratic nominee now. Clinton didn’t so much steal the election as buy it in advance, arranging the details through lackey Debbie Wasserman Schultz. Trump would not be the Republican nominee but for the editorial decisions of cable news producers to—from the very inception of his campaign—announce BREAKING NEWS and cover his nearly identical rants every time he held a rally.

This gratuitous coverage obviated the need for any (other) Trump advertising. Even as the anchors, commentators and other talking heads ridiculed, denounced and appeared puzzled about the Trump phenomenon, the networks made the viewers imbibe his vapid rants. They hooked the most reactionary elements of the population on this blowhard billionaire nut case.

In the Democrats’ case, Wall Street and Wasserman Schultz controlled the primaries. In the Republican case, the corporate news media (for its immediate profit motives) advertised a total dick who happened to be a billionaire and represent the One Percent every bit as much as Hillary.

So they’re now in our faces, day after day. Hideous people with their news-anchor supporters, and cable commentators so ready to dismiss serious issues, put the very best face on their candidate, and change the subject to attack the other candidate. In the end it comes down to: We have a two-party system. The parties made their choices. So you HAVE to choose one.

Julian Assange described the U.S. presidential race as a choice between cholera and gonorrhea. Why should the people of this great country of 310,000,000 people—many with great creativity, integrity and intelligence—be assigned this sick choice of Clinton or Trump by the One Percent that controls everything?

Why should any Bernie supporter so debase himself or herself as to say, “Okay, I know the primaries were fixed and that Bernie could not win because the cards were stacked against him. And despite the fact that I put passion and effort into an anti-Wall Street campaign, now I’ll support the Wall Street candidate, who’s also a liar, who’s going to flip-flop again on TPP and bomb Syria to produce regime change, and provoke Russia in Syria and Ukraine—because well anyway she’s better than Trump, and we all have to vote, don’t we”?

But why should anybody have to hold their nose while they vote? The whole process has been exposed as never before as a farce. Why participate at all in something so corrupt? Do you want to vote just to vote, to publicly display the fact that you believe in the system itself, like the North Koreans who routinely go to the polls patriotically to vote for the options available? (As you may know, in some elections in the DPRK you can vote for a candidate of the Workers’ Party of Korea, Chondoist Chogu Party, Korean Social Democratic Party or independent. There is the manicured appearance of multiparty democracy—just like here. And no doubt some people feel good after the voting, knowing they’ve done their civic duty in a system they believe in. But what if you’ve woken up and don’t believe in the system anymore?)

Why not think bigger, and beyond? Either Clinton or Trump will likely take office in January, as the most unpopular newly elected president of all time. Either will have been brought to power by a manifestly anti-democratic, corrupt process that, more than in past years, is well exposed this time. Either will be vulnerable to mass upheaval, in the wake of Mexico wall construction or the announcement of a Syrian no-fly zone. Appalled by the election choices and result, the majority could maybe consider targeting the rigged system itself.

Just a suggestion. Massive demonstrations in Washington on Inaugural Day by people who have come to reject its legitimacy itself, knowing that it’s run by the One Percent to whom black lives don’t matter, drone warfare is cool and global warming is a hoax. Posters and banners with the curt, easy-to-understand and undeniably true popular slogan: THE WHOLE SYSTEM IS RIGGED!

Imagine a huge rally Jan. 20 demanding its overthrow, or at least the immediate resignation of the system’s illegitimate new executive, even if we don’t know what comes next.  Imagine the admiration that would invite throughout the world, the hope it would inspire should the people of this country rise up to challenge not just a war, policy or person but the corrupt (capitalist and imperialist) system under which we live.

But the Department of Justice headed by Clinton loyalist Loretta Lynch rejected the recommendation. Because—don’t you see?—Hillary has to be the next president. To stop Trump, at all costs! And to stop Putin, that aggressive Putin. And to keep together the “Clinton Coalition.”

Good job, Loretta! But regardless of your effort, Hillary’s Pinocchio nose grows longer by the day, while the whole system is exposed as a cancer requiring the most aggressive treatment.

Gary Leupp is Professor of History at Tufts University, and holds a secondary appointment in the Department of Religion. He is the author of Servants, Shophands and Laborers in in the Cities of Tokugawa Japan; Male Colors: The Construction of Homosexuality in Tokugawa Japan; and Interracial Intimacy in Japan: Western Men and Japanese Women, 1543-1900. He is a contributor to Hopeless: Barack Obama and the Politics of Illusion, (AK Press). He can be reached at: gleupp@tufts.edu

2 Responses to Finally: the Eruption of the Clinton Foundation Scandal