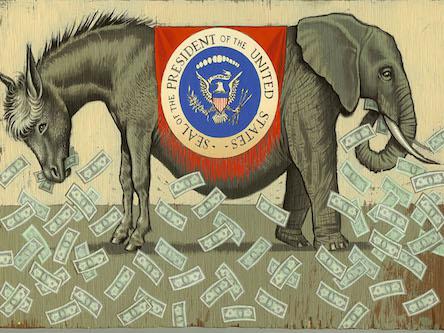 You don’t have to feel “The Bern” to root for Sanders in the primaries, nor must you be a white supremacist to hope that Trump wins the GOP contest. Both campaigns have the potential to fracture the duopoly electoral system that “ensnares the whole U.S. electoral apparatus and ensures that one of the rich men’s parties will triumph at the end of each electoral cycle.” So, cheers for whatever brings chaos and fracture to the duopoly.

“Those who seek fundamental change in U.S. political alignments and structures should root for whatever primary election results that contribute to the dissolution of the Democratic-Republican duopoly system.”

From the perspective of a sports bar, Bernie Sanders’ 57% – 43% victory over Hillary Clinton’s Corporate Demo Crusaders, in Wisconsin, keeps his Leftish Upstarts in the playoffs, although their chances of grabbing the brass ring in Philadelphia this summer are slim to none. Donald Trump’s White Knights stumbled, but may still rally to shut out the Corporate GOP Avengers, in Cleveland, in July.

The problem with sports bar elections is that the Black and progressive teams aren’t playing, and may not even exist. As in professional sports, the “home team” isn’t really from your city: it is comprised of high-paid mercenary athletes beholden to multi-millionaire owners who are bound together in a cabal that manipulates the whole spectacle for their own mega-profits.

The corporate duopoly electoral system is the equivalent of the sports league cabal: whatever the score, the owners win. The best possible outcome of their quadrennial games would be a breakup of the duopoly, through a split in one or both of the corporate parties. For the first time in at least a century, such an earth-shaking fracture is possible, and even likely. Therefore, those who seek fundamental change in U.S. political alignments and structures should root for whatever primary election results that contribute to the dissolution of the Democratic-Republican duopoly system.

“Trump reckoned that the Republican masses wanted a real White Man’s Party – so he’s trying to give them one.”

Donald Trump has done a great service by pushing the Republican Party to the brink of disintegration. For 40 years the GOP has provided its section of the tiny capitalist class with a popular base by acting as the White Man’s Party within the duopoly structure. (Throughout U.S. history, one of the two parties has always been the White Man’s Party, whose organizing principle is white supremacy. This position is permanent, although it may be occupied by different parties at different times.) Until now, racial dog whistles sufficed to inform the white supremacist masses where to caste their ballots. Donald Trump has pumped up the volume to a (Queens-accented) rebel yell, stripping away the GOP “establishment’s” pretenses to civilized bigotry. Trump reckoned that the Republican masses wanted a real White Man’s Party – so he’s trying to give them one.

Such overt misbehavior threatens the post-civil rights ruling class consensus on race and the maintenance of political hegemony in the United States. Far worse, however, are Trump’s heresies regarding U.S. Empire. The billionaire believes he can wheel-and-deal America to continued supremacy in the world, while discarding much of global U.S. military infrastructure, halting wars of “humanitarian” intervention, and confronting China and Russia economically, rather than at the point of a missile. As we wrote in these pages, last week, “If the Trump candidacy can continue to thrive while rejecting the holiest shibboleths of the bipartisan War Party, then we must conclude that the whole U.S. foreign policy debate is a construct of the corporate media and the corporate-bought duopoly political establishments.”

“Two Republican Parties, splitting roughly the same voting constituency, are weaker than one.”

The GOP “establishment” – meaning, the Republican wing of the corporate/financial ruling class – has loudly signaled that it will abandon the Republican emblem if it cannot be retrieved from Trump’s overtly racist and “isolationist” clutches. Trump, for his part, says his followers might “riot” if he is unfairly denied the nomination – and most observers seem to believe them.

Two Republican Parties, splitting roughly the same voting constituency, are weaker than one. Therefore, anti-duopoly “fans” at the political sports bar ought to be cheering for whatever primary election outcomes bring the GOP closer to the breaking point – especially if one of the fractured parts is militarily less bellicose than the current party, while indistinguishable from it on actual racial policy. That’s not cheering for Trump; it’s rooting for a fracturing of the duopoly that ensnares the whole U.S. electoral apparatus and ensures that one of the rich men’s parties will triumph at the end of each electoral cycle.

A similar logic applies to the Democrats that bookend the Republicans. Bernie Sanders eagerly agreed to be a “sheep dog” for Hillary Clinton if she won the nomination. However, polls show that many of his supporters do not feel bound by Sanders’ promise. (And, who knows, at the end of the process, he might not feel honor-bound either, especially if Clinton keeps questioning whether he is a “real” Democrat). By far the greatest contribution the Sanders campaign could make to history would be if it resulted in a genuine and lasting split in the Democratic Party, which is the duopoly holding pen for all but the most radical elements of the U.S. polity. The Democratic Party cannot be transformed from below – and the question will be rendered moot by Clinton’s victory, which is mathematically all but certain. However, with every primary victory won by the Sandernistas, their righteous anger at the corporate stranglehold on the party and their estrangement from its structures, will increase. If Hillary loses discipline and insults them once too often, a real break from the party by a critical mass of Sanders’ left-most followers is possible – whether he swears fealty to Clinton or not.

“By far the greatest contribution the Sanders campaign could make to history would be if it resulted in a genuine and lasting split in the Democratic Party.”

There is no hope that the electoral system can play any positive role as long as the Democrats monopolize all the political terrain to the left of the White Man’s Party(s). The fracturing of the Republican Party – which seems inevitable – is a good thing under any circumstances. However, Hillary will use the crisis in the GOP to create a “big tent” Democratic campaign to absorb millions of disaffected Republicans. No matter what the Democratic Party platform says, Clinton will wage a ferociously “centrist” campaign designed to accommodate refugees from Republican chaos, and she will govern from even further to the right. The Sandernistas historical duty – if they are to have any lasting relevance at all – is to refocus their energies outside the Democratic Party. This is more likely to occur if they do as well as possible in the remaining primary contests, and emerge from the experience with an intense sense of anti-corporate mission – one that is incompatible with the Clinton agenda.

The seats on the left side of the political sports bar should, therefore, be cheering for Bernie in the primaries – and hoping that Hillary behaves like the cackling witch she is, and totally alienates them before, and at, the Philadelphia convention.

BAR executive editor Glen Ford can be contacted at Glen.Ford@BlackAgendaReport.com.