Full Text of TPP Released to Public… And It’s Horrible

Posted on November 6, 2015 by Luther Blissett 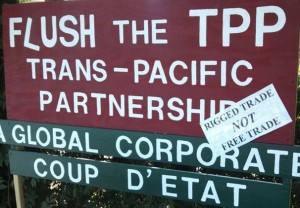 ‘We now have concrete evidence that the Trans-Pacific Partnership threatens our families, our communities, and our environment.’

It’s a disaster for people, the planet, democracy, and the future of the global economy.

That was the immediate assessment of informed critics as world governments, including the United States, on Thursday morning made the full text of the controversial Trans Pacific Partnership Agreement (TPP) available to the public for the first time.

Though a tightly held secret throughout the years-long negotiating process, publication of the entire text (available online here) confirms the deal’s many woeful inadequacies which had been gleaned from leaked drafts and public statements by those privy to its contents.

“The TPP is a disaster for jobs, and environment and our democracy. It is the latest stage in the corporate capture of our society,” said Nick Dearden, executive director of Global Justice Now, in response to the full text.

The enormous so-called “free trade” deal between 12 Pacific Rim nations, he continued, “has less to do with selling more goods, than with rewriting the rules of the global economy is favor of big business. Like the North American Free Trade Agreement (NAFTA), 20 years ago, it will be very good for the very richest, and a disaster for everything and everyone else. NAFTA entrenched inequality and caused massive job losses in the USA, and TPP is turbo-charged NAFTA.”

Based on its initial assessment of the text, Sierra Club said—just as predicted—the TPP would threaten the health of communities, the environment, and global climate.

“We now have concrete evidence,” said Michael Brune, the group’s executive director, “that the Trans-Pacific Partnership threatens our families, our communities, and our environment. It’s no surprise that the deal is rife with polluter giveaways that would undermine decades of environmental progress, threaten our climate, and fail to adequately protect wildlife because big polluters helped write the deal.”

Now parked for all to see and review on the website of the U.S. Trade Representative, the deal itself is over 2,000 pages long, broken into 30 separate chapters and various indexes and appendixes.

Released one month after the final deal was secured at a final negotiating meeting in Atlanta, Georgia, the publication of the text in the U.S. begins a 90-day review period before Congress.

The good news, said Dearden, is that the TPP can still be stopped and that civil society groups in all of the countries involved will use the coming weeks and months to mobilize against its passage. “We’ll be doing all we can to support the huge swathe of trade unions, campaigners, activists and consumer groups  in all those countries fighting TPP in the coming months.”

In the U.S., said Brune, environmental groups like his will be marching and lobbying alongside allies from labor and economic justice groups to make sure lawmakers vote the deal down. “Congress must stand up for American jobs, clean air and water, and a healthy climate by rejecting the toxic Trans-Pacific Partnership.”