Historical cycles: are we doomed to repeat the past?

Posted on September 9, 2015 by Luther Blissett 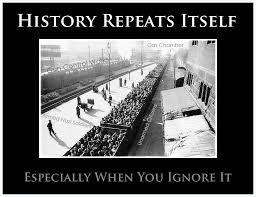 “Those who fail to learn from the past are doomed to repeat it.”—George Santayana

Few people have not heard the above quote, but is the reason history repeats itself because we fail to learn from it, or because history follows an unbreakable pattern we are doomed to repeat? The answer is crucial since, by all indicators, we are about to repeat the classic pattern of social collapse. This would explain why your government is preparing for the worst.

The theory of history repeating itself is as old as history itself. The earliest written account dates back 3,500 years to the Hindu writings known as the Vedas. Since then, many who studied history, from the Greek historian Polybius, to the father of modern history A. J. Toynbee, have formulated a theory of historical cycles.

The clearest example of repeating patterns can be seen in the Chinese Dynastic Cycle. China’s three-thousand-year unbroken history shows a repetitive rise and fall of dynasties. Historians divide this cycle into four parts; the founding of the dynasty, the flowering, the decline, and the period of chaos between dynasties.

This four stage pattern is common to most theories of historical cycles from the Roman poet Ovid, to Hindu philosopher P. J. Sarkar, and more recently in the Strauss–Howe generational theory. Although the titles of the four stages vary among the theories, their characteristics remain nearly identical. I have combined the most commonly used terms for each age as: Warrior, Intellectual, Merchant, and Chaos.

To better illustrate the four stages let us see how they compare to China’s rollercoaster of history.

After the previous dynasty has collapsed and the country broken apart, a new warlord vanquishes his rivals, declares himself emperor, and founds the next dynasty.

This is the age of heroes with value placed on honor, strength, and courage. Notable activities include exploration, conquering, colonising, and building infrastructure. Crime is at its lowest, women’s equality at its highest. Wealth is distributed on a meritocratic basis and the population level recovers from previous lows.

Each new dynasty needs to establish its legitimacy through benevolent rule and so during the reigns of the next few emperors the living conditions of the common people begin to improve. This is often the dynasty’s ‘Golden Age.’

This is the age of arts and sciences valuing new ideas, inventions, and techniques. Notable activities include public art projects and the founding of libraries and universities. Crime is low, women’s equality remains high, and wealth begins accumulating towards administration. Population continues to increase.

While the empire enjoys a period of peace and stability, merchants prosper and the standard of living continues to improve. However, the seeds of the dynasty’s decline are already being sown in the growth of a vast bureaucracy. Soon the government is controlling and taxing all facets of daily life.

The dynasty is in decay and on the verge of collapse. The court and courtiers are corrupt and decadent. The emperor is effeminate, licentious, often an idiot.

Having pilfered the treasury, the empire raises taxes until the common people are reduced to poverty.

The country’s infrastructure falls into disrepair. Levies and irrigations systems fail, destroying farms and crops and causing famines. The people rise up.

This is the age where government is so corrupt that it is unable to effectively rule. There is a breakdown of law and order. Crime is rampant, women’s status reaches its lowest point, and because of disease, warfare, and natural disasters, population declines rapidly. Wealth is in the hands of criminals.

The country splits apart into warring factions each fighting for dominance through a series of civil wars. The fighting continues until a new ‘Hero’ takes control and founds the next dynasty.

This then is the Chinese Dynastic cycle based on a four stage pattern. Can the theory be applied to all civilizations and used to predict future trends? If you study various histories from ancient Egypt and Rome, to the Aztec and Inca you will find this four stage pattern, with slight variations, always discernible.

So what stage in this cycle is America in and where are we heading?

Comparing the characteristics of each stage to our current conditions we can quickly eliminate the Warrior and Intellectual ages. The days of heroic leaders and brilliant thinkers belong to an America long past.

Obviously we are in the Merchant stage, and as anyone who has tried to buy anything ‘Made in America’ can tell you, we are at the end of that stage. The destruction of America’s manufacturing base and devastation of its natural resources can only mean that the fat lady is about to take to the stage.

So is history doomed to repeat itself or can we learn from previous mistakes and avoid rushing headlong into chaos?

In the case of China, their history shows no dynasty was able to avoid this fate. Did they fail to learn from the past? Far from it, Chinese history is the most thoroughly documented of any civilization. China’s philosophers and historians were well aware of the mistakes made by the previous dynasties and ceaselessly warned the emperors of the perils of ignoring the past, all to no avail.

Unfortunately, the evidence suggests that civilizations are indeed doomed to repeat the past.

Whether warned by a predictive model based on historical cycles, or mindlessly playing out their villainous roles, there can be little doubt that the current elite are preparing for Chaos. How else to explain the militarization of domestic police, the massive purchase of arms, ammunition, and armored vehicles, the full spectrum domestic surveillance and the endless nibbling away at our rights and freedoms.

Obviously their plan, as was the plan of all despots before them, is to hole up behind a wall of security while the rest of us fight over the remaining scraps of our civilization.

Of the four ages the easiest to predict is the age of Chaos. It seems every regime throughout history uses the same worn out playbook on how to self-destruct. So here is the future.

Widespread corruption drains the state of its treasury. To recover the losses, the state increases taxation driving businesses into bankruptcy and employees into poverty. Taxation quickly becomes forcible confiscation of property, precious metals, and food.

Food protests turn into riots. The state marches out their henchmen to ‘teach the rabble a lesson.’ Martial law is declared and the full array of terror tactics, from unreasonable search and seizure, to imprisonment and torture are used against ‘dissenters.’

Meanwhile, the lack of government funding leaves the infrastructure to crumble. In the past, this meant farmlands were either flooded, or dried up. Crops failed and starvation ensued. In our modern world we can add grid failure, no gas to heat your homes or run your vehicles, and no access to clean drinking water.

Starving people become desperate and crime increases. Poor nutrition and a lack of funding for hospitals or medical supplies contribute to an increase in epidemic diseases.

The state’s last play is to start a war to kill off a goodly number of ‘useless eaters’ and cower the survivors into submission.

So what did people in the past do to survive the age of Chaos? One strategy used in many civilizations is the monastic system. After the fall of Rome, monasteries served as centers of trade and produced much of the local wealth through farming, winemaking, and small industries. They were the only places where one could receive any sort of education, and if not for the books they preserved and copied, we would know nothing about ancient history.

In China, India, Japan, and the Middle East monasteries were able to survive relatively unscathed while their societies collapsed around them.

If we remove the religious aspect, what we have are autonomous communities that are self-sufficient, share knowledge and skills, and support each other during the bad times. A more recent and secular example of such communities can be found in the mutual aid societies of the 1800s. Learning basic disaster preparedness and working together in mutual support is the key survival strategy.

Despite the grim short-term forecast, the not too distant future will be brighter since the next stage is the Warrior age and a return to ethics, prosperity, and equality.

So what of the elite? Will they emerge from their bunkers to enslave and rule the world as their ultimate dream comes true? In this Chinese history is in accord with Karma. Every member of the aristocracy, of each failed dynasty, was hunted down and executed during the ages of Chaos. Only one emperor lived long enough to see the founding of the succeeding dynasty, and he did so by hiding for forty years—in a monastery.

Stefan H. Verstappen is a Canadian writer, and researcher and author of six books, including “The Art of Urban Survival” and “The Thirty-Six Strategies of Ancient China.”