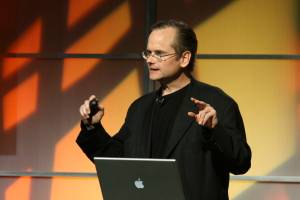 In an April 10 op-ed featured in The Atlantic, Lawrence Lessig argued that the greatest challenge for a movement to reform America’s political system is “the politics of resignation”:

We accept the status quo not because we want it, and certainly not because we don’t care about “process.” To the contrary: We are resigned precisely because we view the very process by which we would effect change as corrupt. We thus steer away from the politics of reform, and focus our (dwindling level of) political attention on other issues instead.

I happen to disagree, because while I think it’s true that many view the process by which we effect change as corrupt, I think that’s less of a problem than the fact that the process actually is corrupt, and that in reality there’s little that the average person can do about it (especially since the average American today is struggling economically and is too busy with work, seeking work, or distracting themselves to avoid work). And why shouldn’t Americans feel cynical after witnessing politician after politician of both major parties break promises to  implement positive and meaningful changes on larger issues of economic and foreign policy?

Regardless, as a solution Lessig proposes a “political moonshot”, a super PAC to end all super PACS, which he describes in further detail in the following passage:

On May 1, May Day (or better “mayday”), we will announce the first steps of an experiment to see if such a machine could be built. Over the past year, we have been working with some of D.C.’s best analysts, to calculate the cost of winning enough seats in 2016 to pass fundamental reform. That battle will begin this year, with a smaller fund targeted in five districts across the country, for the purpose of seeing what works, and what the bigger campaign in 2016 would actually take. That smaller fund will be raised Kickstarter-style, first through small contributions from the bottom up, then matched by a few large contributions from the top down.

While I would like to see such an effort succeed, I can’t see it happening through feeding more money into a system already corrupted by an inordinate concentration of wealth, especially if donations are matched by “a few large contributions from the top down”. An approach I’d rather see (though just as politically unlikely), would be to allocate tax dollars for publicly funded elections with strict limits on “war chests” and advertising. I have no idea how such changes could be made with the current politicians in office and given the current system, how any candidate committed to reducing the influence of money in politics would be nominated, much less get elected. Ever the optimist, Lessig addresses this issue (on a presidential level) arguing:

But if no ordinary candidate makes this the issue, then maybe we should begin to think about an extraordinary one. A public figure with enormous respect—think David Souter or Christine Todd Whitman or Michael Bloomberg—who runs a campaign with a single promise: that if elected, he or she will hold the government hostage until Congress passes fundamental reform; and then once that reform is enacted, will resign—leaving the vice president to become president.

Think of this as president-as-bankruptcy-judge, taking control for the single purpose of reorganizing a government, and once finished, turning it back to the politicians, now free to lead because the kryptonite of special interest money is gone.

Again, while I would like to see such a plan succeed, history shows that money and vested interests are never defeated so quickly and easily. Is it mere coincidence that the two presidents with the greatest potential to fight for the people were Abraham Lincoln and JFK? Anyway, the tentacles of influence extend far deeper into the Washington DC political establishment than just the surface level of electoral politics. Though I may be overly cynical (or optimistic, depending on one’s point of view), I tend to agree more with the approach taken by candidate for class president Tammy in the film “Election” who delivered this short but effective campaign speech: