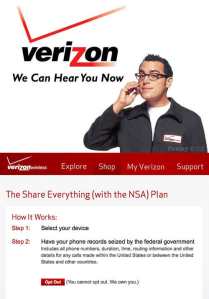 A common defense of mass surveillance used by apologists is “if you have nothing to hide, why worry?” Nevermind that there’s many things that are perfectly legal that we might not “hide” but choose not to reveal indiscriminately (ie. credit card numbers, medical records, nakedness, etc.), we may in fact have something to hide but not even know it. As noted by Moxie Marlinspike of Wired.com:

If the federal government can’t even count how many laws there are, what chance does an individual have of being certain that they are not acting in violation of one of them?

For instance, did you know that it is a federal crime to be in possession of a lobster under a certain size? It doesn’t matter if you bought it at a grocery store, if someone else gave it to you, if it’s dead or alive, if you found it after it died of natural causes, or even if you killed it while acting in self defense. You can go to jail because of a lobster.

If the federal government had access to every email you’ve ever written and every phone call you’ve ever made, it’s almost certain that they could find something you’ve done which violates a provision in the 27,000 pages of federal statues or 10,000 administrative regulations. You probably do have something to hide, you just don’t know it yet.

He also makes a compelling argument for why we should have something to hide:

As a majority of people in these states apparently favor these changes, advocates for the U.S. democratic process cite these legal victories as examples of how the system can provide real freedoms to those who engage with it through lawful means. And it’s true, the bills did pass.

What’s often overlooked, however, is that these legal victories would probably not have been possible without the ability to break the law.

The state of Minnesota, for instance, legalized same-sex marriage this year, but sodomy laws had effectively made homosexuality itself completely illegal in that state until 2001. Likewise, before the recent changes making marijuana legal for personal use in Washington and Colorado, it was obviously not legal for personal use.

Imagine if there were an alternate dystopian reality where law enforcement was 100% effective, such that any potential law offenders knew they would be immediately identified, apprehended, and jailed. If perfect law enforcement had been a reality in Minnesota, Colorado, and Washington since their founding in the 1850s, it seems quite unlikely that these recent changes would have ever come to pass. How could people have decided that marijuana should be legal, if nobody had ever used it? How could states decide that same sex marriage should be permitted, if nobody had ever seen or participated in a same sex relationship?

…We can only desire based on what we know. It is our present experience of what we are and are not able to do that largely determines our sense for what is possible. This is why same sex relationships, in violation of sodomy laws, were a necessary precondition for the legalization of same sex marriage. This is also why those maintaining positions of power will always encourage the freedom to talk about ideas, but never to act.

The East German STASI regime also put their citizens under mass surveillance allegedly for their own good. The information collected was used as leverage by authorities to force informants to betray friends, neighbors and family members.  Trust throughout the society crumbled and eventually the government itself crumbled.