Orwellian Lockstep and a Loaded Syringe 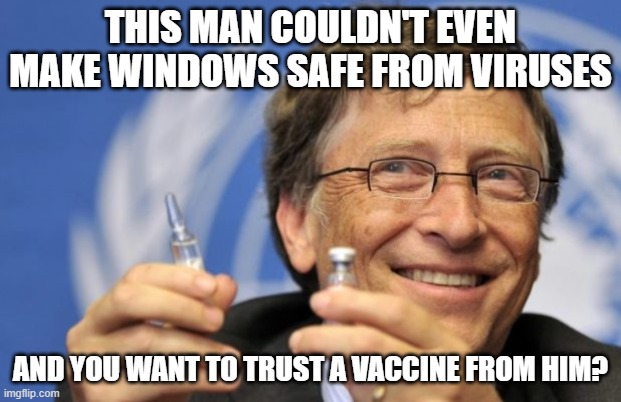 Some years ago, the then vice-president of Monsanto Robert T Fraley asked, “Why do people doubt science”. He posed the question partly because he had difficulty in believing that some people had valid concerns about the use of genetically modified organisms (GMOs) in agriculture.

Critics were questioning the science behind GM technology and the impacts of GMOs because they could see how science is used, corrupted and manipulated by powerful corporations to serve their own ends. And it was also because they regard these conglomerates as largely unaccountable and unregulated.

We need look no further than the current coronavirus issue to understand how vested interests are set to profit by spinning the crisis a certain way and how questionable science is being used to pursue policies that are essentially illogical or ‘unscientific’. Politicians refer to ‘science’ and expect the public to defer to the authority of science without questioning the legitimacy of scientific modelling or data.

Although this legitimacy is being questioned on various levels, arguments challenging the official line are being sidelined. Governments, the police and the corporate media have become the arbiters of truth even if ‘the truth’ does not correspond with expert opinion or rational thought which challenges the mainstream narrative.

For instance, testing for coronavirus could be flawed (producing a majority of ‘false positives’) and the processes involved in determining death rates could be inflating the numbers: for example, dying ‘with’ coronavirus’ is different to dying ‘due to’ coronavirus: a serious distinction given that up to 98 per cent of people (according to official sources) who may be dying with it have at least one serious life-threatening condition. Moreover, the case-fatality ratio could be so low as to make the lockdown response appear wholly disproportionate. Yet we are asked to accept statistics at face value – and by implication, the policies based on them.

Indeed, documentary maker and author David Cayley addresses this last point by saying that modern society is hyper-scientific but radically unscientific as it has no standard against which it can measure or assess what it has done: that we must at all costs ‘save lives’ is not questioned, but this makes it very easy to start a stampede. Making an entire country go home and stay home has immense, incalculable costs in terms of well-being and livelihoods. Cayley argues that this itself has created a pervasive sense of panic and crisis and is largely a result of the measures taken against the pandemic and not of the pandemic itself.

He argues that the declaration by the World Health Organization that a pandemic (at the time based on a suspected 150 deaths globally) was now officially in progress did not change anyone’s health status, but it dramatically changed the public atmosphere. Moreover, the measures mandated have involved a remarkable curtailing of civil liberty.

One of the hallmarks of the current situation, he stresses, is that some think that ‘science’ knows more than it does and therefore they – especially politicians – know more than they do. Although certain epidemiologists may say frankly that there is very little sturdy evidence to base policies on, this has not prevented politicians from acting as if everything they say or do is based on solid science.

The current paradigm – with its rhetoric of physical distancing, flattening the curve and saving lives – could be difficult to escape from. Cayley says either we call it off soon and face the possibility that it was all misguided (referring to the policies adopted in Sweden to make his point), or we extend it and create harms that may be worse than the casualties we may have averted.

The lockdown may not be merited if we were to genuinely adopt a knowledge-based approach. For instance, if we look at early projections by Neil Ferguson of Imperial College in the UK, he had grossly overstated the number of possible deaths resulting from the coronavirus and has now backtracked substantially. Ferguson has a chequered track record, which led UK newspaper The Telegraph to run a piece entitled ‘How accurate was the science that led to lockdown?’ The article outlines Ferguson’s previous flawed predictions about infectious diseases and a number of experts raise serious questions about the modelling that led to lockdown in the UK.

It is worth noting that the lockdown policies we now see are remarkably similar to the disturbing Orwellian ‘Lock Step’ future scenario that was set out in 2010 by the Rockefeller Foundation report ‘Scenarios for the Future of Technology and International Development’. The report foresaw a future situation where freedoms are curtailed and draconian high-tech surveillance measures are rolled out under the ongoing pretexts of impending pandemics. Is this the type of technology use we can expect to see as hundreds of millions are marginalized and pushed into joblessness?

Instead of encouraging more diverse, informed and objective opinions in the mainstream, we too often see money and power forcing the issue, not least in the form of Bill Gates who tells the world ‘normality’ may not return for another 18 months – until he and his close associates in the pharmaceuticals industry find a vaccine and we are all vaccinated.

US attorney Robert F Kennedy Jr says that top Trump advisor Stephen Fauci has made the reckless choice to fast track vaccines, partially funded by Gates, without critical animal studies. Gates is so worried about the danger of adverse events that he says vaccines shouldn’t be distributed until governments agree to indemnity against lawsuits.

But this should come as little surprise. Kennedy notes that the Gates Foundation and its global vaccine agenda already has much to answer for. For example, Indian doctors blame the Gates Foundation for paralysing 490,000 children. And in 2009, the Gates Foundation funded tests of experimental vaccines, developed by Glaxo Smith Kline (GSK) and Merck, on 23,000 girls. About 1,200 suffered severe side effects and seven died. Indian government investigations charged that Gates-funded researchers committed pervasive ethical violations.

Kennedy adds that in 2010 the Gates Foundation funded a trial of GSK’s experimental malaria vaccine, killing 151 African infants and causing serious adverse effects to 1,048 of the 5,949 children. In 2002, Gates’ operatives forcibly vaccinated thousands of African children against meningitis. Approximately 50 of the 500 children vaccinated developed paralysis.

Bill Gates committed $10 billion to the WHO in 2010. In 2014, Kenya’s Catholic Doctors Association accused the WHO of chemically sterilising millions of unwilling Kenyan women with a  ‘tetanus’ vaccine campaign. Independent labs found a sterility formula in every vaccine tested.

Instead of prioritising projects that are proven to curb infectious diseases and improve health — clean water, hygiene, nutrition and economic development — the Gates Foundation spends only about $650 million of its $5 billion budget on these areas.

Despite all of this, Gates appears on prime-time TV news shows in the US and the UK pushing his undemocratic and unaccountable pro-big pharma vaccination and surveillance agendas and is afforded deference by presenters who dare not mention any of what Kennedy outlines. Quite the opposite – he is treated like royalty.

In the meantime, an open Letter from Dr. Sucharit Bhakdi, emeritus professor of medical microbiology at the Johannes Gutenberg University Mainz, to Angela Merkel has called for an urgent reassessment of Germany’s lockdown. Dr Ioannidis, a professor of medicine and professor of epidemiology and population health at Stanford University, argues that we have made such decisions on the basis of unreliable data. In addition, numerous articles have recently appeared online which present the views of dozens of experts who question policies and the data being cited about the coronavirus.

While it is not the intention to dismiss the dangers of Covid-19, responses to those dangers must be proportionate to actual risks. And perspective is everything.

Millions die each year due to unnecessary conflicts, malnutrition and hunger, a range of preventative diseases (often far outweighing the apparent impact of Covid-19), environmental pollution and economic plunder which deprives poor countries of their natural wealth. Neoliberal reforms have pushed millions of farmers and poor people in India and elsewhere to the brink of joblessness and despair, while our food is being contaminated with toxic chemicals and the global ecosystem faces an apocalyptic breakdown.

Much of the above is being driven by an inherently predatory economic system and facilitated by those who now say they want to ‘save lives’ by implementing devastating lockdowns. Yet, for the media and the political class, the public’s attention should not be allowed to dwell on such things.

And that has easily been taken care of.

In the UK, the population is constantly subjected via their TV screens to clap for NHS workers, support the NHS and to stay home and save lives on the basis of questionable data and policies. It’s emotive stuff taking place under a ruling Conservative Party that has cut thousands of hospital beds, frozen staff pay and demonised junior doctors.

As people passively accept the stripping of their fundamental rights, Lionel Shriver, writing in The Spectator, says that the supine capitulation to a de facto police state has been one of the most depressing spectacles he has ever witnessed.

It’s a point of view that will resonate with many.

In the meantime, Bill Gates awaits as the saviour of humanity — with a loaded syringe.

3 Responses to Orwellian Lockstep and a Loaded Syringe